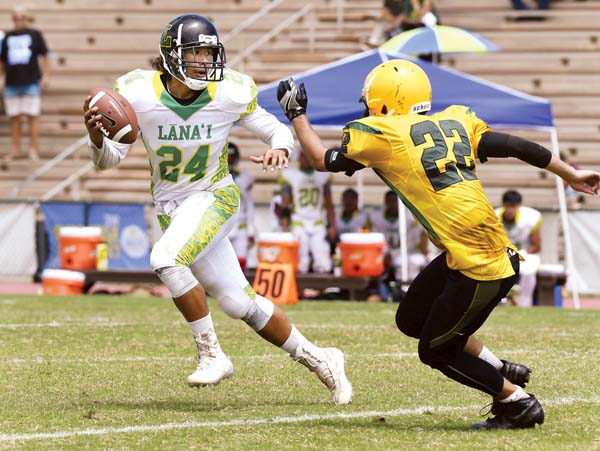 The Lanai Pine Lads wake up today in first place in the league after a 36-23 win over Hana. Both teams entered the game 1-0 in MIL play.

The Pine Lads put the game out of reach when Devrene Kahananui-Alejado scrambled for a touchdown from 10 yards out with 1 minute, 52 seconds left to play. The final score was set up by a 39-yard pass from Kahananui-Alejado to Naighel Calderon.

“I mean, we came out flat-footed — I guess we celebrated a little bit too much last week,’ Lanai coach Stephen “Fergie” Ferguson said. “Second half we kind of went regroup, we got our offense clicking, defense started seeing their assignments, and things started working better for us.” 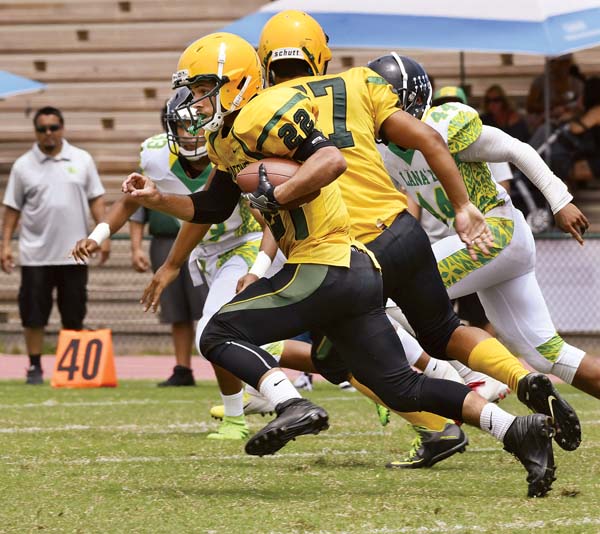 “It’s not no secret — those two guys are our bread and butter,” Ferguson said. “We try to work in some other stuff, but those guys seem to always gravitate to the ball and to the end zone, so we kind of stick with it.”

The Pine Lads took control with a pair of third-quarter touchdown drives after trailing by a point at halftime. Kahananui-Alejado rambled in from 19 yards out to give Lanai a 14-7 lead — the score capped a seven-play, 60-yard drive.

Late in the third quarter, Roderick Noble hauled in a 42-yard scoring pass from Kahananui-Alejado to push the lead to 22-7 with 1:34 left. The big play on the drive was a 7-yard run by Calderon on fourth-and-6, moving the ball to the Hana 32-yard line two plays before the touchdown.

The Dragons pulled within 22-15 when Nahinu Lind hit a wide-open Kaawaloa Shamblin for a 50-yard scoring pass in the first minute of the fourth quarter.

The Pine Lads answered with a 70-yard drive that was culminated by a 9-yard scoring pass from Kahananui-Alejado to Jesse Sigrah, upping the lead to 30-15 with just under 9 minutes to play.

The Dragons pulled back within a touchdown, 30-23, on a 3-yard scoring run by Lind with 4:30 to play. A 13-yard pass from Lind to Irie Pu-Akima moved the ball to the Lanai 6 two plays before the touchdown.

The Dragons held a 7-6 lead at halftime — Hana struck first when Lind scrambled in from 15 yards out on a broken play to make it 7-0 with 2:32 left in the first quarter.

The Dragons gained possession when Loea Helekahi recovered a fumble at the Hana 40-yard line. The Dragons then went 60 yards in 12 plays, converting third downs three times on the drive.

Lanai answered on the ensuing possession when Calderon hauled in a pretty 40-yard scoring pass from Kahananui-Alejado on the first play of the second quarter on fourth-and-5.

The Pine Lads came up short on their final possession of the first half after reaching the Dragons’ 18-yard line. The game ended with the Dragons in possession with the ball inside the Lanai 20.

“Hard-fought game, it went both ways and all, stuff like that,” Hana coach Duane Kaupe said. “We stayed in there … we were kind of worried. We still made a lot of mistakes and the boys got tired, but my guys fought.”

Ferguson smiled after the game when told his team is in first place.