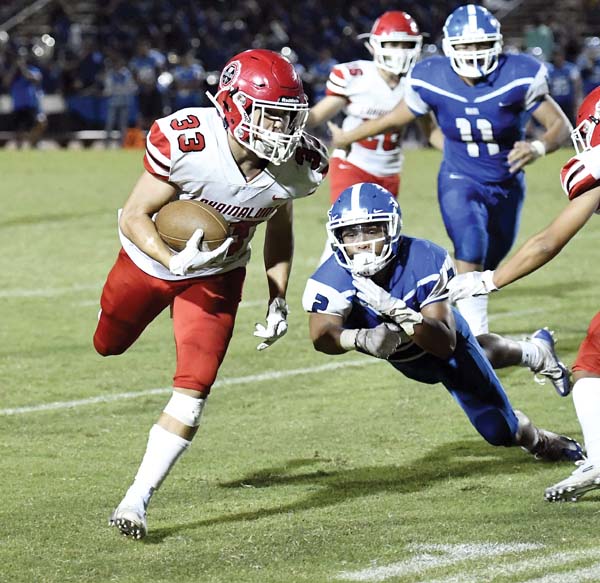 WAILUKU — The battle between the two football state tournament representatives from a year ago in the Maui Interscholastic League turned out much the same as it did twice last season.

Lahainaluna High School won its 11th straight MIL game, 28-3 over Maui High on Saturday night in front of a large, enthusiastic, red-and-black-clad crowd that was glad to see its team back in action after the devastating West Maui fires that postponed a game last week.

“We have got to shake off the rust in practice more than anything else,” Lahainaluna co-head coach Garret Tihada said. “I’m hoping that a game like this that was pretty tight in the beginning, that we can refocus now and get back to work.”

“It was just good to get back playing because we’ve lost two games already,” Garret Tihada said. “We lost the Kapalama (preseason) game (that was canceled) and then we lost the King (Kekaulike) game last week. It was nice to get back into the rhythm.” 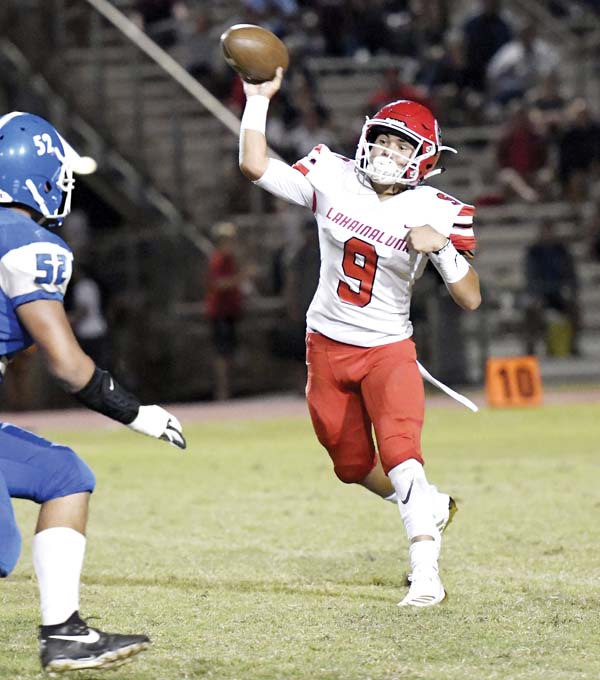 The Lunas pushed their lead to 28-3 on a methodical 80-yard drive that was capped by a 1-yard scoring dive by Joshua Tihada to open the second half.

Nainoa Irish was 4-for-5 passing on the possession for 86 yards after being sacked for a loss of 7 yards on the first play.

Maui High had a golden opportunity to answer when Christian Lee recovered a fumbled punt at the Lahainaluna 22, but the Sabers turned the ball over on downs when Atu Falekaono was stopped for a 1-yard gain on fourth-and-3.

The Lunas led 21-3 at halftime on the strength of a balanced attack. Irish passed for touchdowns of 18 yards to Kai Bookland to start the scoring less than four minutes into the game and later he found Joshua Tihada on a 17-yard scoring pass with 2:02 left in the half.

The Lunas’ defense forced a three-and-out after Irish’s second touchdown pass and Tre Rickard returned the punt 43 yards to the Sabers’ 17-yard line. 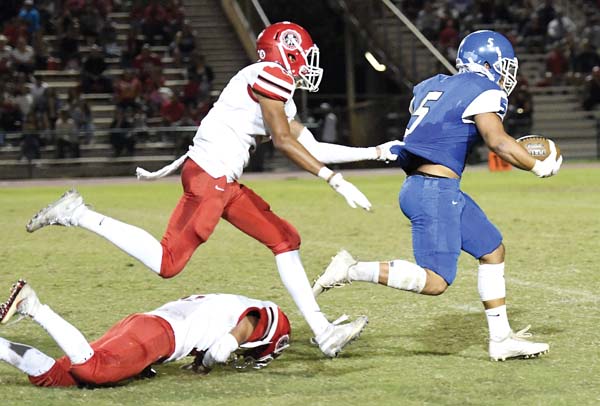 Joshua Tihada pounded it in from the 1 two plays later.

The short drive was helped by a pair of Maui High penalties that gave the Lunas a first down on the 12. Tihada ran 11 yards to the 1 just before the final touchdown pushed the lead to 18 with 47 seconds to go before the break.

The Sabers hung tough for much of the first half — they cut the lead to 7-3 on a 22-yard field goal by Brex Delray with 3:17 left in the second quarter. The score was set up by a 41-yard burst up the middle by Naia Nakamoto, who was tackled at the 4.

“They’re a tough team — like I said, 44 (Viliami Makoni) and 48 (Falekaono) — we had to put too much concentration on them and we still didn’t stop them at times,” Garret Tihada said. “That just allowed everybody else to rally around the ball. They did a good job game planning and they stopped our run.”

The Lunas’ defense had three interceptions in the first half, two by Kaihulali Casco.

Irish passed for 109 yards in the first half — Bookland had three catches for 59 yards. Lahainaluna also rushed for 53 yards spread amongst eight ballcarriers.

“We did a decent job passing tonight,” Garret Tihada said. “We missed some wide-open receivers at times, but we’ll get better with that.”

Maui High was led by Nakamoto’s 69 yards rushing on 12 carries in the first half. He finished with 112 yards on 24 carries.

“Nakamoto ran tough tonight — he ran inside,” Garret Tihada said. “He’s a good outside runner, but tonight he showed he’s a good inside runner also.”

Maui High coach James Kammerer said, “No moral victories, so we’re going to go back to hard work. The coaches need to meet and discuss and figure out how to better prepare and help these young men to be successful.”