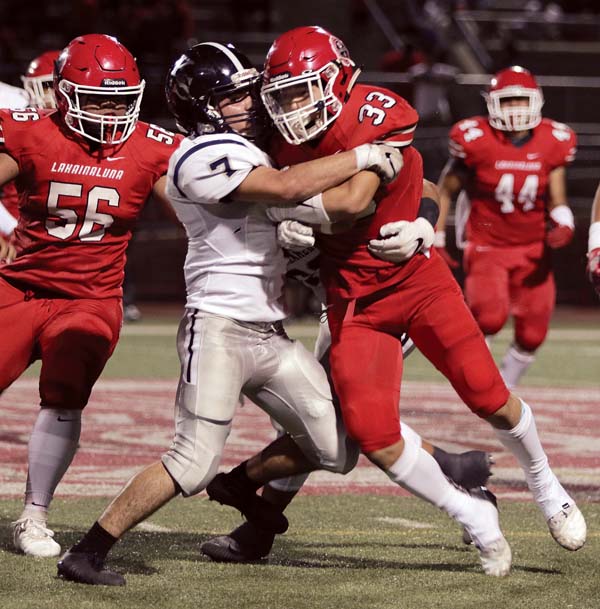 LAHAINA — It was an emotional night for the Lahainaluna High School football team, but the Lunas were not looking for excuses after a hard-fought 14-0 win over Kamehameha Maui on Saturday night.

The victory came after a touching, raucous salute to Maui County’s first-responders to the devastating fires that ravaged the area surrounding the 187-year-old campus last month. The reminders were everywhere, including a portion of the track circling the football field where fire blackened the surface.

It was Lahainaluna’s first home game of the season — their scheduled Aug. 25 home opener against King Kekaulike was postponed by the fires and Hurricane Lane.

“They did a great job preparing their kids defensively,” Lahainaluna co-head coach Garret Tihada said of Kamehameha Maui. “And they took it to us.” 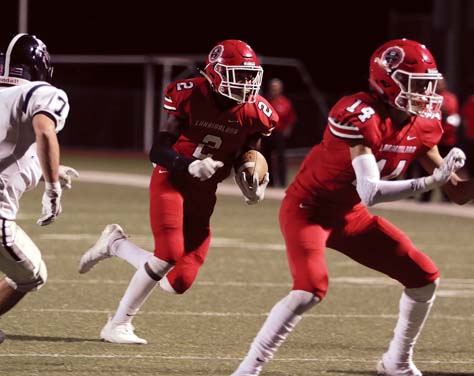 The Lunas finally found some breathing room when Joshua Tihada scampered into the end zone from 5 yards out to make it 14-0 with just under 6 minutes to play. Tihada finished with 201 yards rushing on 34 carries.

Moments after the touchdown, Lahainaluna’s Etuati Storer grabbed an interception and rambled 62 yards to the end zone, but that score was taken off the board by a block-in-the-back penalty.

Instead of a three-touchdown lead, the Lunas had the ball on their own 46-yard line. It was one of eight penalties on the night for the Lunas, for 75 yards. They also threw a pair of interceptions and missed two short field goals.

It was the second interception return for a touchdown by the Lunas taken off the scoreboard by the same type of penalty. 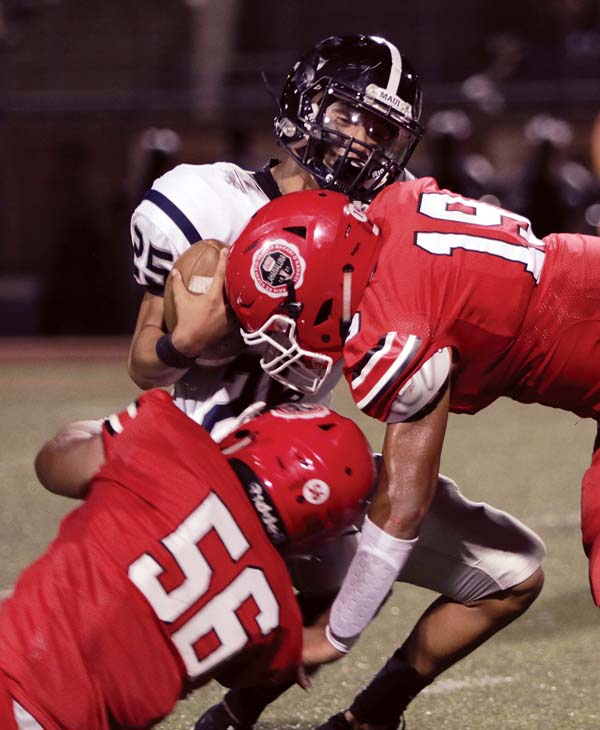 “Very frustrating,” Garret Tihada said. “We’ll get back to the drawing board. We’ve got the bye coming up, so we’ll clean those things up.”

The Lunas’ coach was not buying any thought of the big night being a factor for the malaise.

“Not at all — the factor was Kamehameha preparing and coming out here and playing hard,” Garret Tihada said. “That was the only factor that resulted in that score. They did a great, great job preparing their kids.”

Lahainaluna took the opening kickoff of the second half and went 57 yards in 13 plays before missing a 27-yard field goal try after the snap was mishandled.

Tihada carried 10 times on the drive for 48 yards. 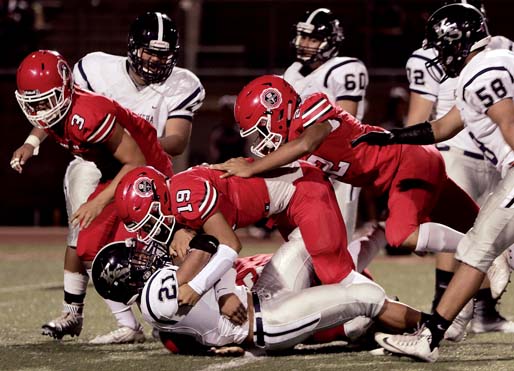 The defense immediately forced a three-and-out by the Warriors and a bad punt snap resulted in a loss of 10 yards, giving the ball back to the Lunas on the Kamehameha Maui 17-yard line.

This time the Lunas missed a 31-yard field goal with 2:31 left in the third quarter, leaving the score 7-0, the Lunas’ lead at halftime.

After forcing a three-and-out on the first possession of the game, the Lunas went 59 yards in 10 plays and took the lead on a 5-yard run by quarterback Nainoa Irish.

That proved to be the game-winner for a defense that has surrendered just three points in three MIL games.

Joshua Tihada carried five times for 39 yards on the opening drive — he finished the first half with nine carries for 77 yards. In the second half, he carried the ball 25 times for 124 yards.

A few minutes later, Kamehameha Maui had a golden opportunity, starting on the Lahainaluna 39-yard line after an interception of Irish by Tristan Catan.

Lahainaluna’s Devon Sa-Chisolm intercepted Tiliti Adams on the next play and appeared to return the ball 66 yards for a touchdown, but the play was called back to midfield by a block-in-the-back penalty.

Kapena Gushiken then intercepted an Irish pass near the goal line after the Lunas had advanced to the Kamehameha 22-yard line.

Starting from their own 8 after Gushiken’s pick, the Warriors advanced to the Lahainaluna 32 before giving up the ball on downs late in the half.

“We just needed to make a few more plays on offense and I think we would have been OK,” Kamehameha Maui coach Ulima Afoa said. “This is a tough place to play — I’m proud of our kids, the effort they put forward. You know, hey, there are no moral victories, but we’ve got a chance. I tell our kids that’s a sign that we’re getting better.”