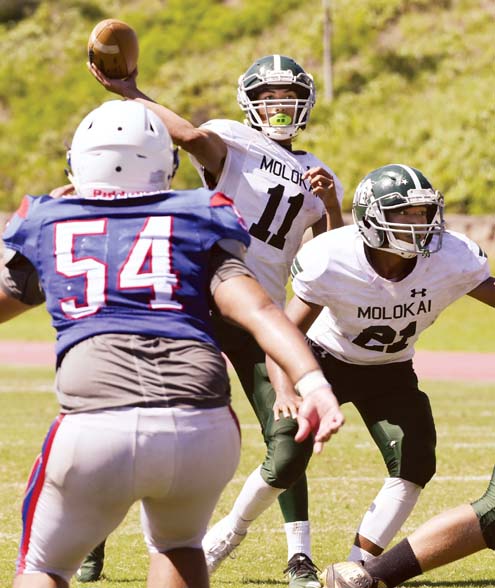 WAILUKU–It was a virtual elimination game in the second week of the season between the two teams that own all six Maui Interscholastic League eight-player football championships.

The three-time defending champions from Molokai High School rebounded from their first loss in league play in four seasons with a convincing 26-14 win over Seabury Hall on Saturday morning at War Memorial Stadium.

“Absoulutely, we’re in a position after losing last week that we need to make sure that every guy in front of us (is a must win),” Molokai coach Mike Kahale said. “We can’t look too far ahead to the rematch with Lanai. We have to take Seabury, Hana, all these guys seriously. Seabury played well today–they weren’t going to give us anything.”

Farmers’ starting quarterback Kaimana Nakayama suffered a concussion in the loss and did not make the trip Saturday. 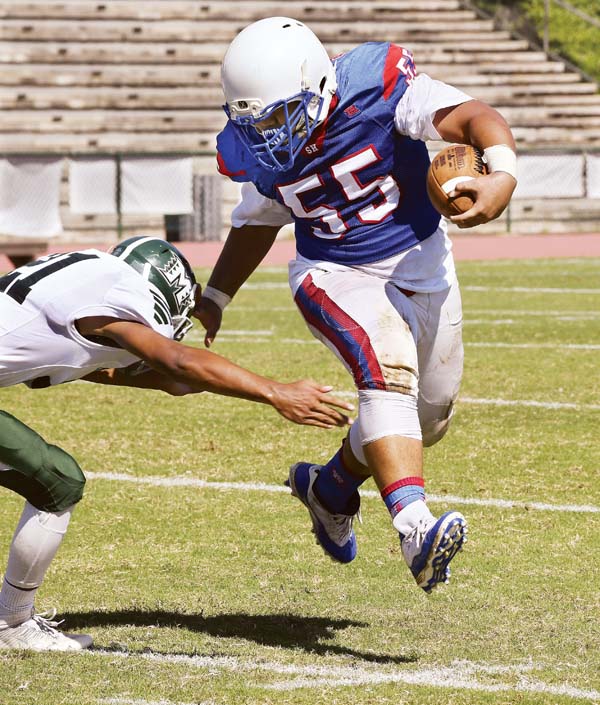 Molokai senior Chevy Augustiro stepped in and threw a pair of touchdown passes and guided the offense well all day long Saturday.

“I wasn’t that nervous,” Augustiro said. “I knew that we could execute the plays. We just had to stick to our assignments.”

Indeed, Kahale said his nickname for Augustiro–a baseball and rodeo standout outside of football–is “Sly Mongoose.”

“Chevy is a gamer, we knew that already,” Kahale said. “He’s our backup quarterback, our starting linebacker. Kaimana went down, so he knew he had to step up. He’s ‘Cool Hand Luke,’ man.”

Molokai scored on its first possessions of the third and fourth quarters to take a commanding 26-7 lead. 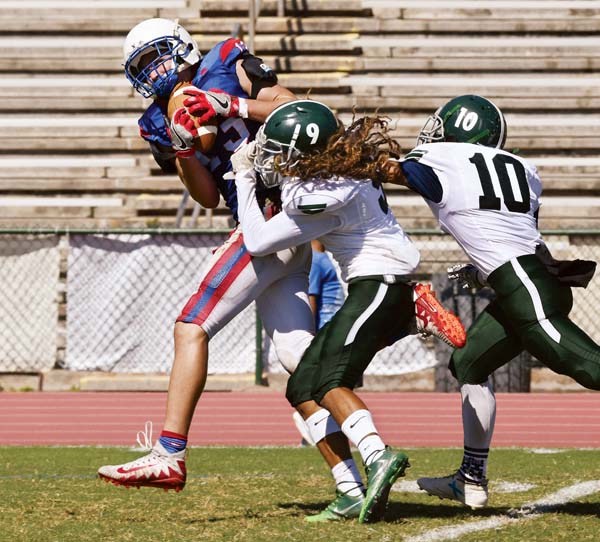 The Farmers went 61 yards in five plays, scoring on a 29-yard strike from Augustiro to Kali Hirashiama four minutes into the second half to make it 20-7.

Jayse Lalim-Rillon scored on a 2-yard run with 9:03 to play to extend the lead to 19 points. The big play on the drive was a 39-yard pass from Augustiro to Kanalu Kahale that moved the ball to the Seabury Hall 14.

Blayde Omura scored on an 8-yard run with 3:18 to play for Seabury Hall (0-2) to finish the scoring.

The Farmers took a 14-7 lead into the halftime break–Kaimana Paleka’s 1-yard dive culminated a five-play, 69-yard drive to make it 8-0 one play into the second quarter.

Augustiro rambled 51 yards to the 1 on the play before the touchdown.

Molokai pushed the lead to 14-0 on a 46-yard drive that finished with a 14-yard scoring pass from Augustiro to Kahale.

Seabury Hall moved Steve Savou, listed as a two-way lineman, to quarterback to find the end zone. Savou hit starting quarterback Kai Preseault for a 19-yard scoring pass with 1:14 left in the second quarter to bring the Spartans within seven points.

“They’re always tough, always competitive,” Seabury Hall coach Dave Darino said of the Farmers. “We know when they come here, that they are always going to give us their best game. They come out and they do their thing.”

The Farmers are building lasting memories on trips like this one, according to coach Kahale. They arrived via a chartered ferry that cost them more than $5,000 on Thursday, slept in a gym, and arrived for the 9 a.m. kickoff at about 7:30.

“These guys are building memories for a lifetime,” Kahale said. “They get back together in 10 or 20 years and remember these moments–the moments they have on the field, on the boat, just hanging out with each other. The challenge sometimes is to make sure we’re focused in on the game and we go to sleep at the right time.”