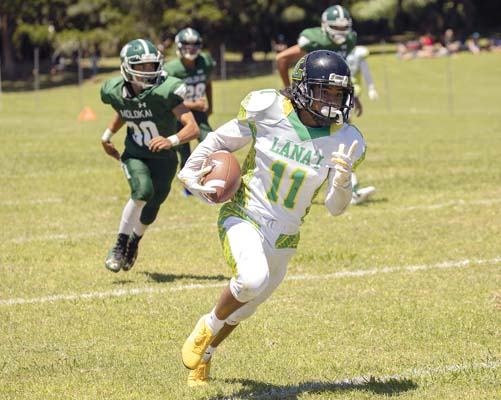 Lanai High School defeated Molokai for the first time ever in 8-player football action on Saturday in Lanai City.

Lanai (1-0) led 28-2 at halftime on the strength behind the offensive exploits of Devrene Kahananui-Alejado and Naighel Calderon. Kahananui-Alejado threw a 14-yard touchdown and two-point conversion to Kian Tubera to give Lanai an 8-0 lead with 6 minutes, 36 seconds left in the first quarter.

Four minutes later, Kahananui-Alejado scored on a 1-yard run to make it 14-0 at the end of the first quarter.

Chevy Augustiro scored on a 17-yard run for the Farmers to open the second-half scoring, one play into the fourth quarter. Calderon answered by scoring on a 24-yard pass from Kahananui-Alejado.

Kanalu Kahale scored on a 20-yard pass from Augustiro for the Farmers and Jesse Sigrah scored on a 4-yard run to cap the day for the Pine Lads.

The two teams meet again in Hoolehua on Oct. 6.

The Dragons scored on a 50-plus-yard run with a minute and a half to go, according to Seabury Hall Dave Carino.

“Hana is a very scrappy team, they fought hard on both sides offensively and defensively,” Carino said.

Kai Preseault scored the first touchdown for the Spartans (0-1).