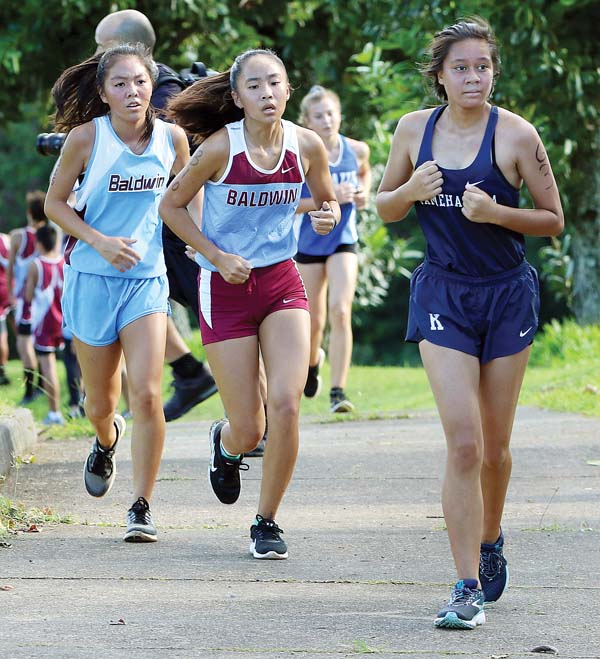 On Saturday, though, Gangnath would not be denied and claimed her first MIL cross country win in 23 minutes, 3.28 seconds during the Westside Invitational at Kapalua Village course. Her time was 44 seconds better than teammate Kaylee Volner and nearly four minutes ahead of third-place Sarah Pease of King Kekaulike.

“It feels pretty good,” Gangnath said of her first victory. “I’ve been working really hard over the summer and it’s definitely working in my favor. I was excited for this race to finally get to show what I did over the summer.”

Maui High’s Hunter Shield also captured his first victory in an upset over teammate and defending champion Adam Hakola. Shield’s time of 19:25.00 was about 26 seconds better than fellow Saber Damon Wakefield and 33 seconds ahead of Hakola, who took third. 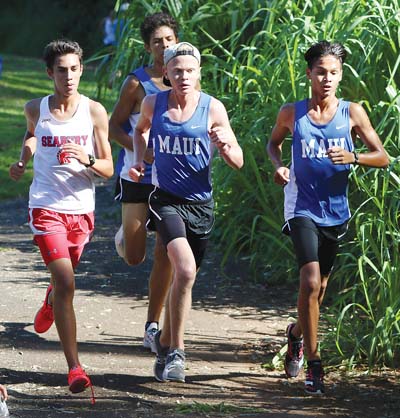 “That’s the first race I’ve ever won,” Shield said smiling. “Last year, I got second a lot, I’m just happy to get first.”

The Spartans’ girls scored 33 to finish on top of Baldwin by 13 points. King Kekaulike claimed third with 75.

Gangnath will look to lead Seabury Hall’s smallest team in years with just eight runners on the roster compared to last year’s 19. The Spartans are two-time defending overall state champions.

“Our team is smaller than we’ve ever had,” Spartans coach Bobby Grossman said. “We didn’t have a good preseason and it’s showing a little bit. We just got to get in shape.”

Saturday’s season-opening meet featured the most physically demanding course that was made even more difficult due to ongoing renovations at the Kapalua golf course. Gangnath said routes were changed throughout the hilly course, but she was confident due to her summer training that improved her endurance. 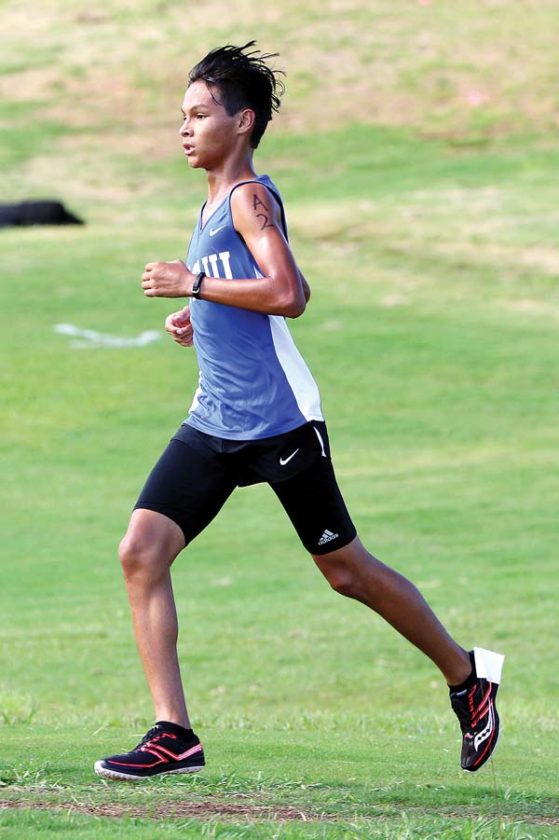 “There’s a lot more uphill than before and that’s kind of been what I’ve needed to work on,” she said. “Going in to today, I was focusing on doing the uphills strong and using the downhills to my advantage.”

Hunter also welcomed the challenging course after running 300 miles over the summer throughout his neighborhood in Kihei. He said he ran just 50 miles last year, but was encouraged to increase his training by coaches and Hakola.

For Volner, a freshman competing in her first race of her career, the course was not a welcomed start to the season but she was pleased with her second-place finish.

“A lot of hills. I don’t really like hills,” she said with a smile. “I wasn’t hoping for this to be my first three-mile race, but it was a good start.”

Grossman said the team will be looking to Gangnath and Volner to remain on top as well as improvement from other runners if it has any hope at capturing another state title.

“Kaylee is the future and she’s going to be a front runner at the state level one day,” he said. “And Chloe can be a state champion.”