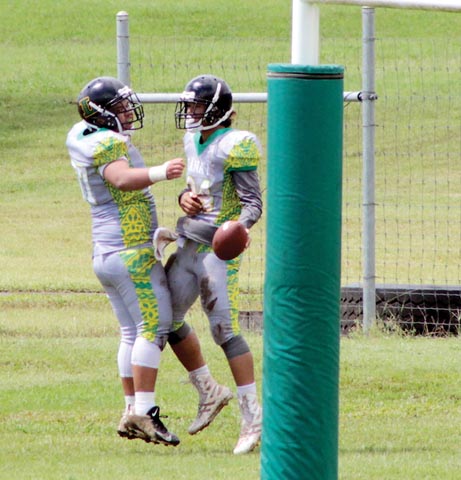 After answering every question this season on the way to the first prep football title in island history — including Saturday’s no-doubt-about-it 78-6 victory over Seabury Hall in Lanai City — the Lanai High School eight-player team had one more thing on its mind Saturday.

Will there be a parade through Dole Park in the near future?

“Who knows? I think that that might be something we need to do,” Lanai coach Stephen Ferguson said. “We need to celebrate this first football banner we can hang in our gym. So, I feel we’ll celebrate this well.”

The Pine Lads finished 5-1 in Maui Interscholastic League play and share the title with Molokai — the pair split their two games, each team winning at home.

“It was the hard work of the whole coaching staff — all my coaches stepped up and went above and beyond their part to accomplish the goal we set at the beginning of the season,” Ferguson said. “I’m very proud of my players and my coaching staff — we can be proud of this for a long time.”

Ferguson said his program is building. Last season, the Pine Lads reached the MIL championship game for the first time and this season they had to order new uniforms because 38 players turned out and there were only 35 jerseys.

Lanai beat Molokai for the first time this season, snapping the Farmers’ 15-game MIL winning streak 44-16 on Sept. 1. Ferguson spoke all season about the pressure that went along with the early win over the three-time defending champions.

“Once we got the win over Molokai we knew it was up to us, it was in our hands to claim this MIL championship,” Ferguson said. “So, you know, the coaches and boys did awesome. Our boys played good.”

Saturday’s game was not close from the outset — Lanai led 30-6 after one quarter and 64-6 at halftime.

“It was a well-deserved day for my upperclassmen and my underclassmen. They worked hard for this.”

Ferguson said with adverse weather conditions to begin the game, it was important to start fast.

“The weather was kind of weird over here, so we were worried,” Ferguson said. “If there was lightning and they called the game, I told them: ‘We need to be ahead on the scoreboard just in case this game gets called by lightning and whatever score’s on the board is the final.’

“So, we made a point to get out front and get up early.”

Kahananui-Alejado had touchdown runs of 40, 6 and 37 yards. He also threw for three touchdowns. Calderon had scoring runs of 24 and 54 yards.

“Everybody did well, we spread it around,” Ferguson said. “Seniors did well, everybody had fun today.”