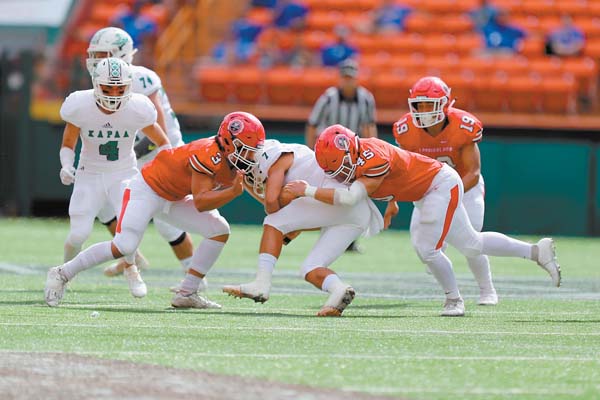 Lahainaluna High School’s Etuati Storer (left) and Apakasi Felemi bring down Kapaa quarterback Kahanu Davis during the Lunas’ 34-32 victory over the Warriors in the Division II state championship game Saturday at Aloha Stadium. Felemi was credited with the forced fumble early in the third quarter that keyed the Lunas’ comeback from a 26-7 halftime deficit. ANDREW LEE photos

HONOLULU — Elijah Oliveira-Kalalau knew the play was huge. So did Philip Rapozo.

The pair of Lunas smacked Banasihan at the 2-yard line and the ball came loose. Lahainaluna’s Kaihulali Casco pounced on the key fumble and a comeback for the ages was on.

Lahainaluna roared back from a 26-7 halftime deficit to beat Kapaa 34-32 in the First Hawaiian Bank/HHSAA Division II state championship game. It started with a 99-yard drive that began after the huge goal-line takeaway by the Lunas’ defense.

“Shout out to the coaches — what you see the defense do out there, that’s their knowledge and we just displayed it on the field,” Oliveira-Kalalau said. “It felt great, I felt like I hyped up the offense to do their job. It felt really great, that was a strong point of the game.” 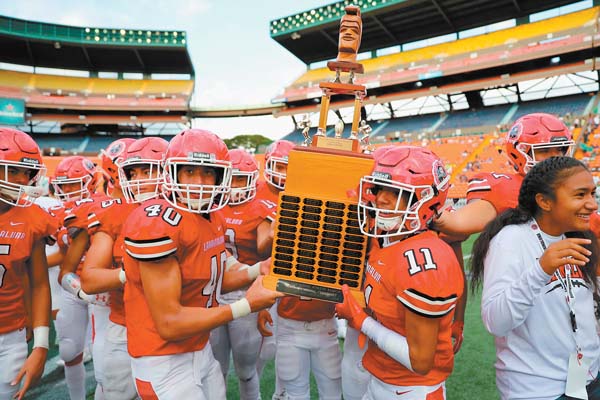 Two plays prior, Lahainaluna quarterback Nainoa Irish threw his only interception of the day — Kapaa’s Kaiola Lingaton returned the pick to the Lunas’ 7.

The Lunas defense gave up 32 points in 10 games prior to surrendering 26 points in the first half against Kapaa.

In the first half, the Warriors piled up 256 yards on 24 plays, an average of 10.7 yards per play. In the second half, the Lunas limited the damage to 85 total yards — 56 of which came on the final desperation Kapaa drive after Lahainaluna had taken a 34-26 lead — and just 4.3 per play.

“It feels really great,” Oliveira-Kalalau said. “First half we came out, it wasn’t so good. Second half we came out, we improvised, we came out stronger, harder, and, you know, we eventually came out with that ‘W.’ Everybody makes mistakes, it’s just how you come back from that.”

Still, the crucial goal-line takeaway — Felemi was officially credited with the forced fumble — loomed large in the end. Banasihan ran for a game-high 197 yards on 25 rough-and-tumble carries. 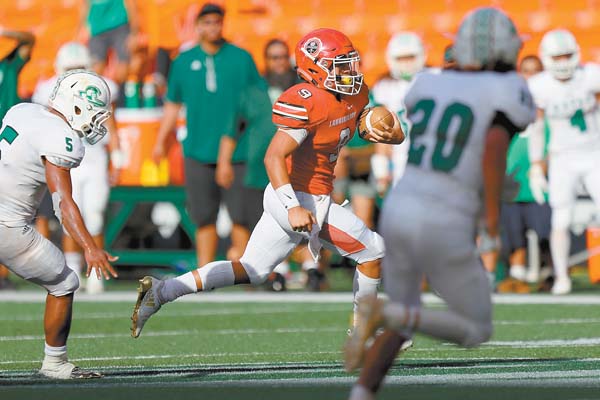 “I don’t know if we would have put them away,” Kapaa coach Rapozo said of the possible score. “You saw the resilience of that team. It sure would have helped us. Stuff happens, man.”

The Lunas have won 21 straight games and are one of three teams in Hawaii history to win three straight state football crowns in any division — Iolani (2007-12) did it first and Saint Louis joined the party with a 38-17 win over Mililani in the Open Division final on Saturday night.

According to Stacy Kaneshiro of scoringlive.com, the Lunas (11-0) are just the sixth Maui Interscholastic League team to finish a season undefeated overall, the first since Maui High went 9-0 in 1995. The 1944 Lunas finished 7-0.

While he said to The Maui News at practice on Monday that “we would love that challenge,” Lahainaluna co-head coach Garret Tihada said after the game that no work on moving up to Division I for 2019 has taken place. 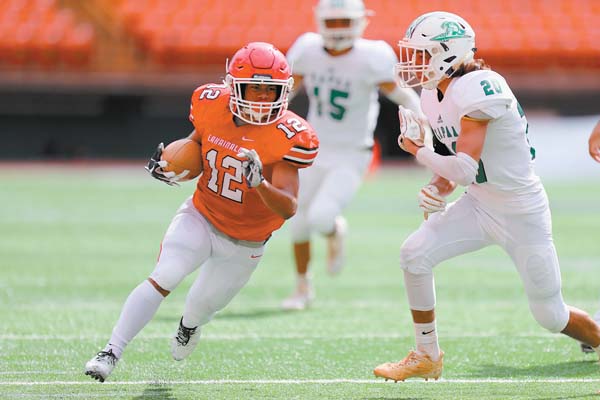 The vaunted defense that gave up just 109 yards per game in MIL play saw seniors Watson, linebackers Etuati Storer and Nyles Pokipala-Waiohu, and Felemi and Oliveira-Kalalau on the defensive line play their last games in a Lunas uniform.

“It’s a blessing, we’re going to take this back home, we’ll celebrate, enjoy the moment, and for our seniors we’ll continue our lives and hopefully go to college and continue our dreams,” Storer said. “There were no worries. Us seniors had to keep the team together. We fought — and we fought hard — and we pulled through with this.”

Back next season on offense will be Irish, running back Joshua Tihada — who already owns the state tournament record with 14 rushing touchdowns — dynamic wide receiver Kai Bookland, center Hookipa Sakaila and right tackle Taai Galoia. Galoia, a 6-foot-1, 305-pound sophomore, will be the only non-senior among that group.

Derek Perez, a junior who scored what proved to be the championship-clinching touchdown on a 23-yard run with 4:05 to play, is another weapon who sees significant time on both sides of the ball.

“Our defense was just holding it down second half, I’m just proud of that,” Perez said.