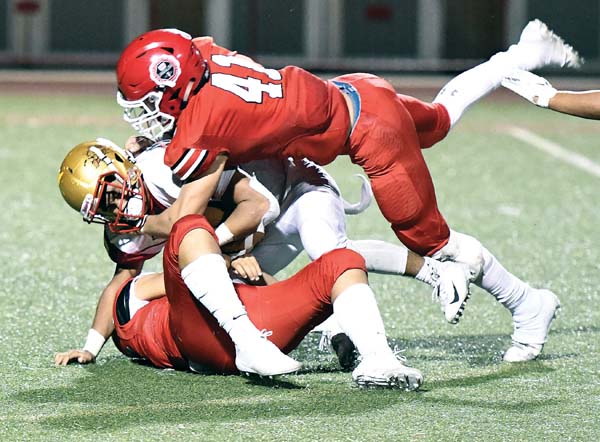 LAHAINA — As he watched the jubilant aftermath of his last home football game, Lahainaluna High School offensive lineman Ikaika Viela could only smile through his facemask.

The Lunas rolled past Roosevelt 48-10 in the semifinals of the First Hawaiian Bank Division II State Football Championship at Sue Cooley Stadium on Saturday.

Lahainaluna (10-0) will play for its third straight state title when it faces Kapaa next Saturday at Aloha Stadium on Oahu.

“You know, a lot of experiences over here, a lot of blood, sweat and tears, a lot of emotions,” Viela said. “When I think about it, it’s kind of sad to see it’s my last game here.” 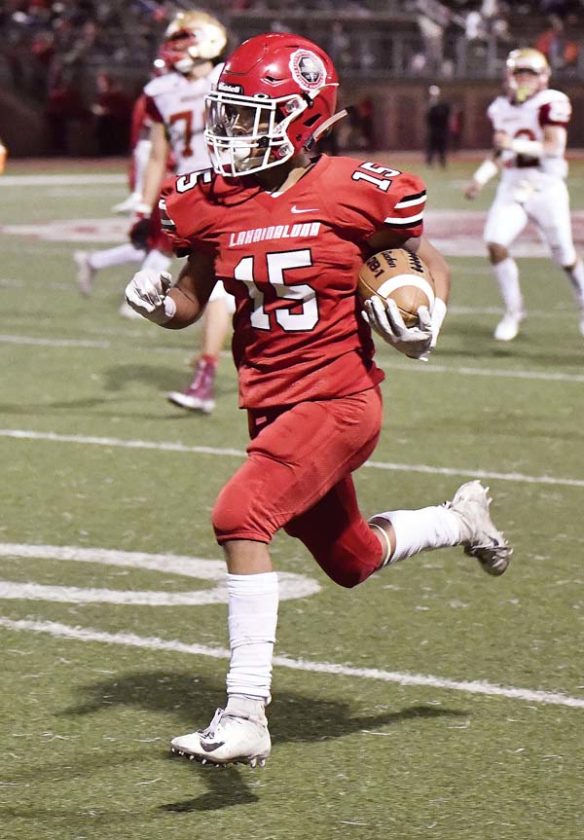 “Our defense kept us in the game with those saves and our special teams did a great, great job,” Lahainaluna co-head coach Garret Tihada said. “It made up for those fumbles pretty much.”

The first Lunas fumble came on the third play from scrimmage when Joshua Tihada lost the ball and Roosevelt’s Jason Hur recovered and returned the ball 21 yards to the Lunas’ 20-yard line.

After giving up a 13-yard run to the 7 on the first play of the possession, Lahainaluna’s defense recovered to force a 25-yard field goal by Mason Morishige that gave the Rough Riders (12-2) a 3-0 lead.

The Lunas answered immediately with Kamalei Watson’s 86-yard kickoff return to take a 7-3 lead, igniting a 27-point burst by the Lunas to take control.

That was the first of three special teams highlight-reel touchdowns for the hosts, who rang up their 20th straight win over the last two seasons. 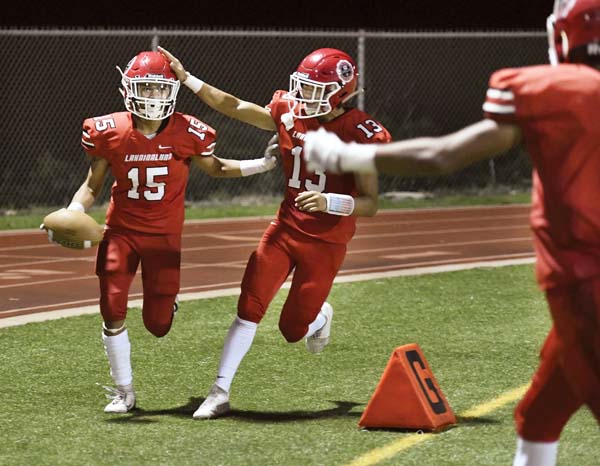 Lahainaluna’s Tre Rickard is congratulated by Kawehi Gillcoat after the first of his two fourth-quarter punt returns for touchdown Saturday. -- The Maui News / MATTHEW THAYER photo

The special teams helped the cause again when Nainoa Kulukulualani-Sales blocked a punt, giving the Lunas the ball on the Roosevelt 21.

Derek Perez scored on a 3-yard run three plays later to push the lead to 14-3 with 3:59 left in the first quarter.

Lahainaluna needed just one play on its next scoring drive when Kaihulali Casco rose over two defenders and snagged a pass from Nainoa Irish on a 72-yard touchdown.

Lahainaluna’s next scoring drive lasted two plays and was capped by a 46-yard run by Tihada out of the wildcat formation to increase the lead to 27-3 with 5:10 left in the half.

The Lunas’ third fumble of the first half led to the Rough Riders’ lone touchdown. Irish was sacked by Tamaki Iijima, who forced a fumble and returned it 17 yards to the Lunas’ 25, and Sky Ogata scored on a 16-yard run up the middle on fourth-and-1 to bring Roosevelt within 27-10 with 1:14 left in the second quarter. 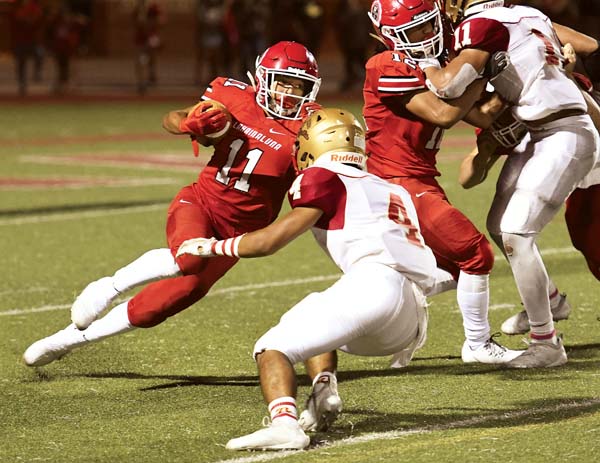 The Lunas’ Kamalei Watson follows a block by Jesse Dudoit as he turns upfield. -- The Maui News / MATTHEW THAYER photo

The Lunas put the game out of reach with two quick scores midway through the second half. Esekielu Storer hit Casco with a 39-yard scoring pass with 22 seconds left in the third quarter.

“They brought in that new corner on that second (scoring) catch and you should try to take advantage of it,” Garret Tihada said. “Kalae (Esekielu) Storer made a good throw.”

“They all came down and they bunched up in the middle. He just took to the outside, both times,” Tihada said. “It opened the game wide open.” 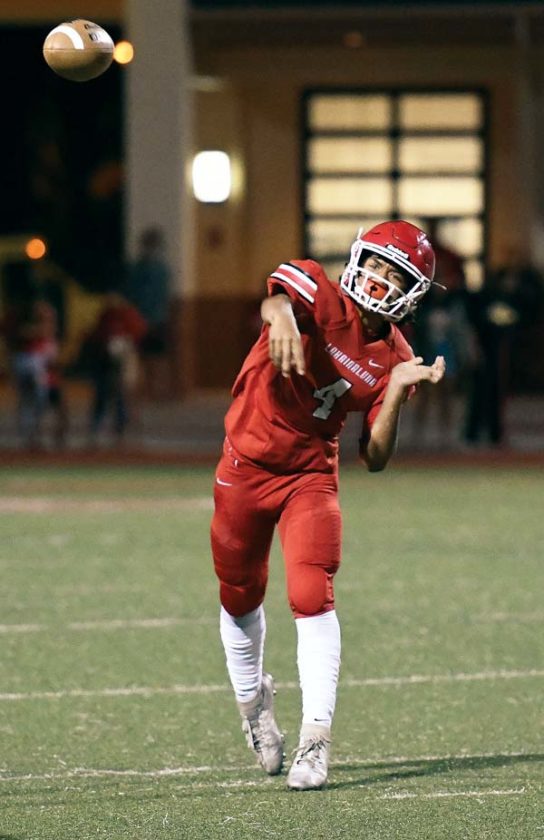 The domination was total for the two-time defending state champions. Three different quarterbacks combined to go 8-for-10 passing for 174 yards spread out to six receivers.

Joshua Tihada led nine Lahainaluna rushers with 10 carries for 63 yards. The junior’s touchdown was the 11th of his career in state tournament games, one behind the all-division record held by BJ Batts of Saint Louis.

The Lunas possessed the ball for less than 14 minutes of the 48-minute game, but the big plays and lightning-strike drives more than made up for that.

“We’re not happy at all with the offense,” Garret Tihada said. “We weren’t consistent enough on the ground and even picking up the blitzes, we weren’t consistent with that in the passing game. Those are little things we have got to clean up, but we made some big plays when we needed to and that’s great.”

Ogata finished 7-of-14 for 44 yards and two interceptions. He also led the Rough Riders with 56 yards on 19 carries. 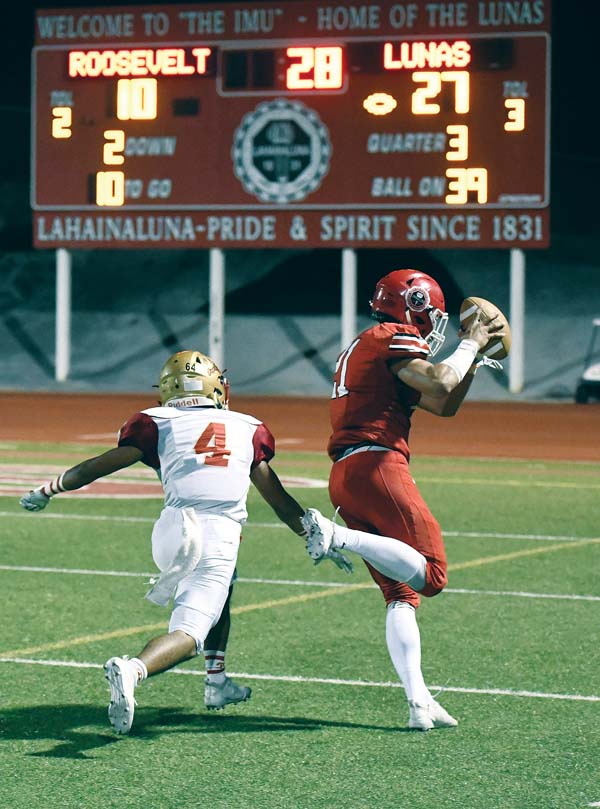 “Lahainaluna, man, they’re awesome, they’re well-coached, they’re a great team, a great team,” Roosevelt coach Kui Kahooilihala said. “What a great atmosphere to play a game in. Our team, we’re in states for the first time since 2007.

“These kids — and even our coaches — they’re excited, but you know, they know that Lahainaluna is the defending state champs for a reason. They’re big-time guys, man, big-time.”

Josh Bogle, who lost his legs and hands because of a bacterial infection, rides to a second-place finish in the adaptive kneel division. — ONE MORE PHOTOGRAPHY photo

Jackson Bunch gets ready to set up for his next turn Saturday. u Abigail Balmus throws spray on her backside. — ONE MORE PHOTOGRAPHY photo

The Lunas’ Kamalei Watson follows a block by Jesse Dudoit as he turns upfield. — The Maui News / MATTHEW THAYER photo

Lahainaluna’s Tre Rickard is congratulated by Kawehi Gillcoat after the first of his two fourth-quarter punt returns for touchdown Saturday. — The Maui News / MATTHEW THAYER photo