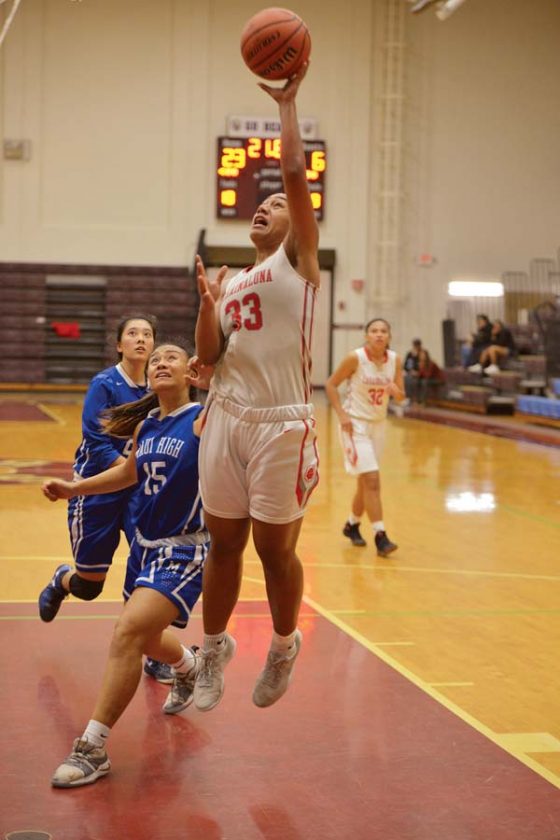 WAILUKU — Susi Namoa wasn’t about to miss this game if she had a choice.

The Lahainaluna High School senior forward poured in 18 points while sitting out the fourth quarter to lead the Lunas to a convincing 54-13 win over Maui High in the championship game of the Maui Interscholastic League Division I girls basketball tournament on Tuesday night at Jon Garcia Gym.

It came a day after she scored 31 points in a 55-21 win over Baldwin during which she suffered a sprained ankle that brought tears to her face and a scream from her mouth.

The possibility of Lahainaluna’s star perhaps missing the final had whispers of upset rolling through the crowd. Instead, MIL win No. 162 and championship No. 15 in a row came impressively.

“No, I actually didn’t think so, but I knew that I couldn’t let my team down,” Namoa said of her pre-game thoughts of playing in the game at all. “So I knew that all I had to do was right after school go down to the trainers, get taped, rehab my ankle and come back and be ready to play. It was just a mental thing.” 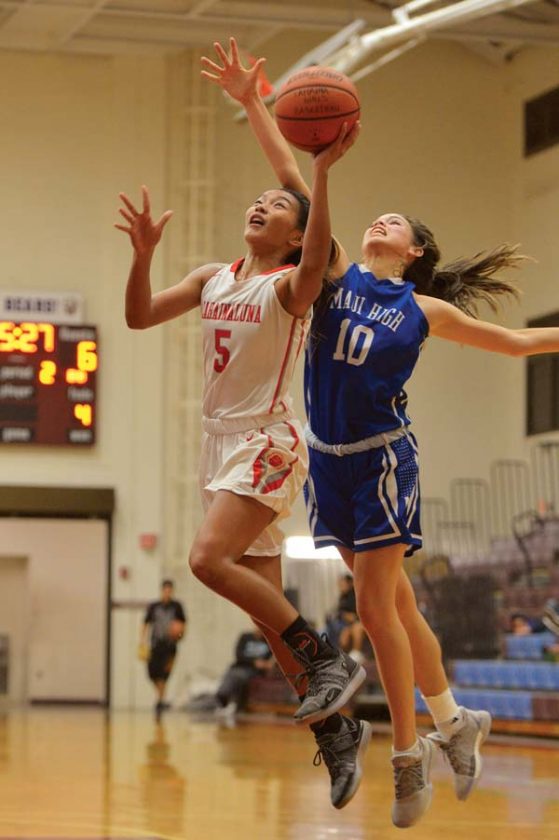 The victory sewed up the MIL title for the Lunas (14-0), while Maui High (7-7) will play King Kekaulike (9-4) tonight in a second-place playoff game for the MIL’s final state berth.

There’s no question, Namoa was completely ready. Her rebounding was tenacious, her defense was intimidating and her offense was unstoppable.

The Lunas built a 9-2 lead after one quarter, 29-6 at halftime and turned on the mercy-rule running clock when Namoa took a nifty pass to score a backdoor layup with 2:35 left in the third quarter, pushing the lead to 37-6.

Maui High finished with just three field goals and did not make its first until Atasha Timbreza scored on a driving layup with 1:12 left in the third quarter. Althea Garduque scored off a pretty pass from Timbreza with 5:30 to play, and Timbreza sank a long 3-pointer at the buzzer to account for the final Sabers’ field goal.

While Namoa has her sights set on college basketball, her immediate focus is on next week’s state tournament. She is part of the ninth straight senior class to leave the program working on the vaunted winning streak. 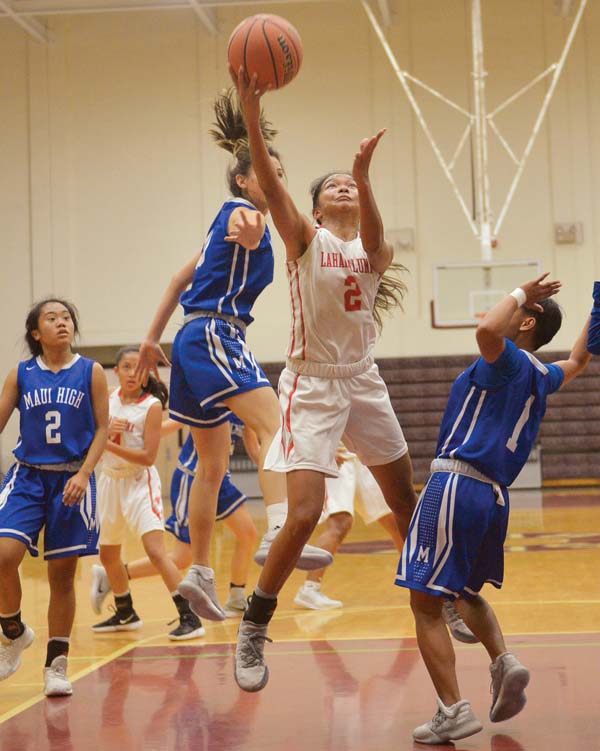 The Lunas’ Abby Akamine puts up a shot as Thornton defends and the Sabers’ Hiilani Arai and Honey Let Padasdao look on.

“It’s really important, but at the end of the day it’s more a team thing,” Namoa said. “We don’t want to put too much pressure on the kids about the streak, it is what it is at the end of the day whether we win, lose. Me going out, leaving the program, I’m good. It’s off my shoulder, I haven’t lost. So, good luck to my youngins next year.”

Ten of the 11 Lunas who played scored. Coach Todd Rickard admitted that when he reaches the end of another season with the streak intact, he breathes a sigh of relief. He had to dismiss four players from the roster this season, three of them starters, for one reason or another.

“It’s big, we can rest up our girls, get them healthy, focus on next week,” Rickard said. “The girls came out to play tonight. Susi, she’s not 100 percent, but at this point in time there’s no excuses. You have got to play now, she did that and she hung in there and she did well tonight.”

Maui High coach Gilbert Silva could only tip his hat to the victors. He admitted he started to rest his starters in the second quarter in anticipation of tonight’s game. 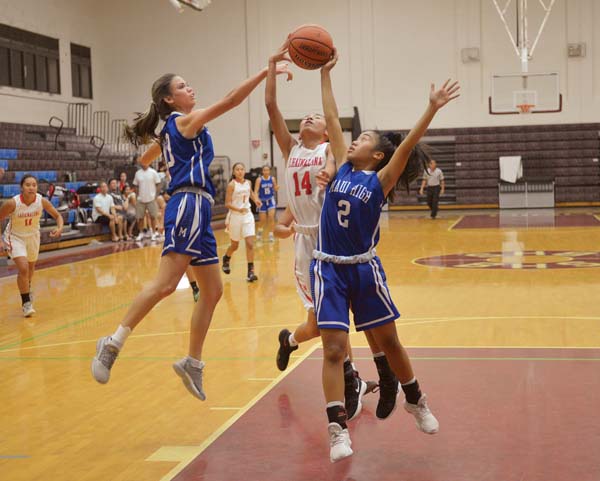