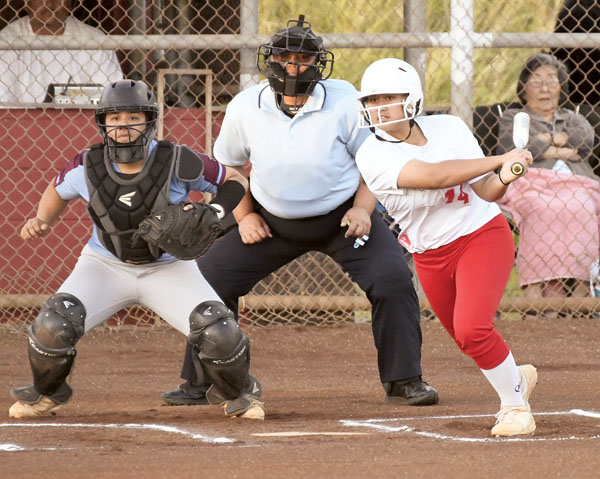 Lahainaluna High School’s Ka‘aina Kalanikau follows through on a hit in front of Baldwin catcher Saree Ann Kekahuna during the first inning of the Lunas’ 13-11 win over Baldwin on Wednesday at the Lunas’ field. The Maui News / MATTHEW THAYER photo

LAHAINA — If there was a more fitting player to deliver the game-winning hit in this wild affair, it would have been hard to find.

Fourth-year starter Nohili Hong smacked a two-run single in the bottom of the sixth inning to give Lahainaluna High School a 13-11 win over Baldwin in a Maui Interscholastic League softball game that took more than 2 1/2 hours to complete on a chilly West Maui evening on Wednesday at Lahainaluna Softball Stadium.

It was the first meeting between the two teams since the Lunas won a 3-2 decision with a walk-off win in the overall MIL championship game last May.

“Really, really good,” Hong said of the feeling of smacking the game-winner into a huge gap in right field. “I just wanted to help my team out, get this win because we worked really hard to get to this point.”

Hong was 2-for-2 with a double, three RBIs and reached base all five times she went to the plate, and Ka’aina Kalanikau was 2-for-5 with two doubles to lead the Lunas (2-0). 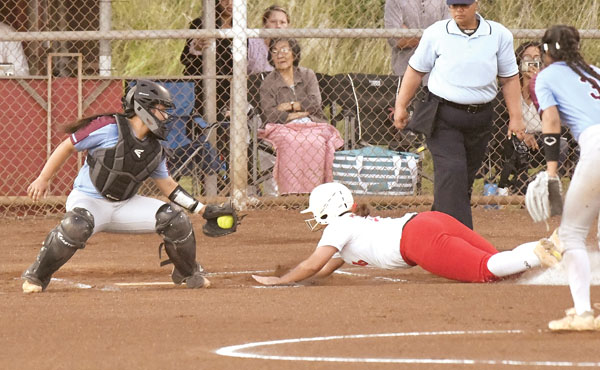 Back-to-back RBI doubles by batterymates Saree Ann Kekahuna and Aliya Harmon gave the Bears (0-2) a 2-0 lead in the top of the first inning.

The Lunas quickly struck for five unearned runs in the bottom of the first with the help of four errors and just one hit, Lily Kamaunu’s bloop into shallow left field.

Kekahuna smacked a two-run single in the top of the second to bring the Bears within 5-4, but the inning ended on the same play when baserunner Sammy Martinez was caught in a rundown after rounding second base too far.

The Lunas got right back to work, starting the bottom half of the inning with back-to-back doubles by Kalanikau and Hong to push the lead to 6-4. Another error and a dropped fly ball allowed two more runs to score.

L.B. Kahahawai-Kekona knocked in a run for the Bears with a double to the left-field wall in the top of the third, but the Lunas pushed the lead to 9-5 when another error allowed Kalanikau to round the bases when she was on first, Hong walked behind her and a throw to second sailed into the outfield. 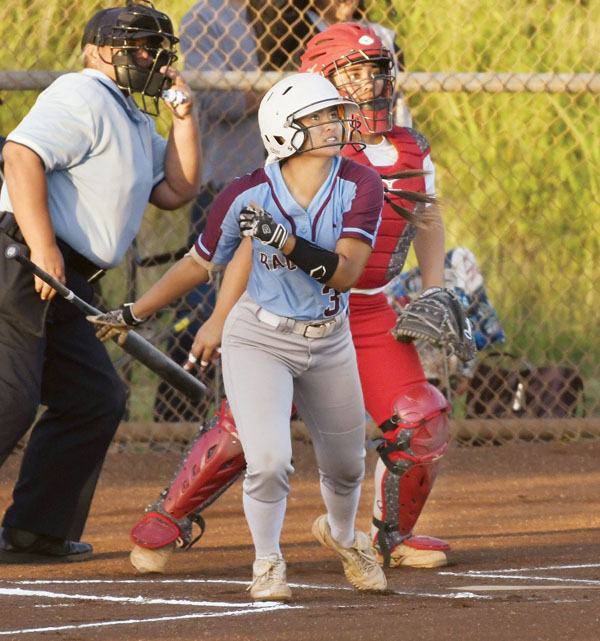 Baldwin loaded the bases with one out in the top of the fourth, and Harmon delivered an RBI groundout to bring the Bears within 9-6.

The Lunas left leadoff hitter Keani Pagan at third base in the bottom of the fourth, marking the first half-inning of the game without a run.

The Bears loaded the bases with one out in the top of the fifth — on Kahahawai-Kekona’s second double, a hit batsman and an infield single by No. 9 hitter Lia Castillo.

Alyssa Ferreira then followed with a towering grand slam that just cleared the fence in right field to give Baldwin the lead for the first time since the top of the first.

Harmon added a run with a sharp single up the middle to give the Bears an 11-9 lead before the Lunas ended the inning with a double play. 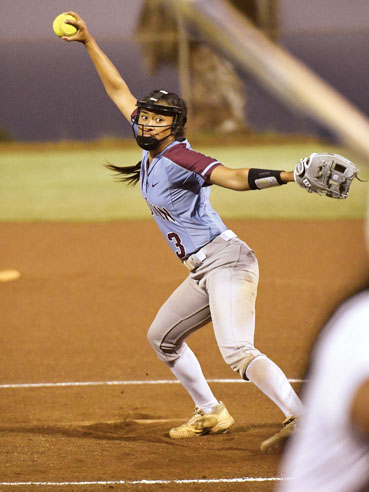 Another Lahainaluna double play ended the top of the sixth when center fielder Ocean Makekau snagged a line-drive shot by Jessica Ai and then threw to first to double-up Kahahawai-Kekona off the base.

Lahainaluna loaded the bases with no outs in the bottom of the sixth. Harmon struck out Daisha Dagdag looking for the first out before No. 9 hitter Brogan Mitchell and Seraya Casco walked to tie the score.

Harmon struck out Kalanikau looking for the second out, bringing Hong to the plate, and she delivered her game-winning two-run single to right field on a 2-2 count.

“Absolutely, I am very proud of these girls holding their composure,” Lahainaluna coach Lei Nakamura said. “I know they lost it a little bit when the grand slam came right there, but who’s not going to? So, we expected that, but, you know, it’s obstacles like that that’s going to make a better player.

“So, all I had to tell them was, let’s credit her for that. That was a beautiful hit. And yes, we feel not so good about it. That four runs was earned, absolutely. Then it was Nohili’s turn, battling in that box to put us ahead.”

“Every year is different and as a coach I just have to do my job to make sure my team does what they need to, have fun out there,” Baldwin coach Sanoe Kekahuna said. “It’s a really good sign that we battled back, just to show that we are not going to give up.”

Lahainaluna High School’s Ka‘aina Kalanikau follows through on a hit in front of Baldwin catcher Saree Ann Kekahuna during the first inning of the Lunas’ 13-11 win over Baldwin on Wednesday at the Lunas’ field. The Maui News / MATTHEW THAYER photo