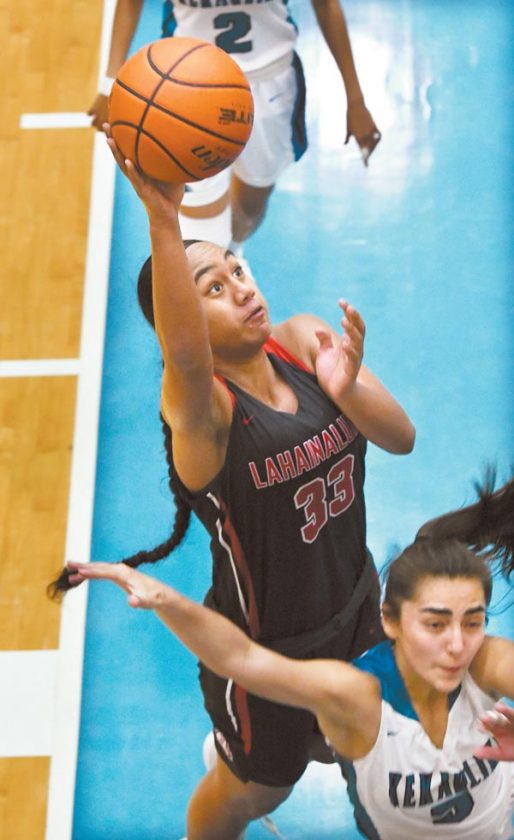 Susi Namoa’s basketball journey is far from over, but she has left a remarkable legacy at Lahainaluna High School, reaching a mountaintop several other Lunas already occupy in Maui Interscholastlc League lore.

Ameera Waterford guided her Seabury Hall team further than it had ever been before and will be back for another run next year.

Both are the choices of the league’s coaches as The Maui News MIL Players of the Year for Divisions I and II, respectively.

Namoa was the unanimous choice of the league’s D-I coaches at the top of the list.

“This is the first time I’m actually hearing it — it’s very cool,” Namoa said. “It’s something new to me because I’ve never been Division I Player of the Year, but it’s actually an honor. I’m very happy.” 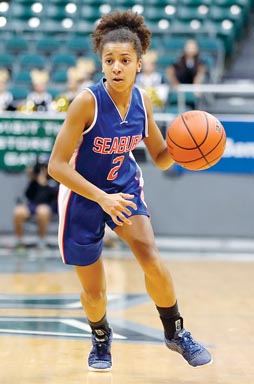 Namoa joins an impressive list of Lunas to be MIL Players of the Year, following on the immediate footsteps of two-time winner Braeanna Estabillo.

“It’s deftinitely an honor to join those girls.” Namoa said. “I’m just thankful to all of the coaches who nominated me for being the MIL Player of the Year. Knowing that there’s a lot of great athletes before me and knowing that they all played for the same program as me is even bigger.”

Namoa did it on a team that didn’t enjoy the regular depth the Lunas usually roll out after coach Todd Rickard had to dismiss four players, including three starters, during the season.

Namoa admitted that she breathed a sigh of relief when the Lunas finished their 11th straight unbeaten MIL season, running their all-sport league-record winning streak record to 162. They missed the state semifinals for just the second time in those 11 seasons, snapping a streak of five straight state final fours. 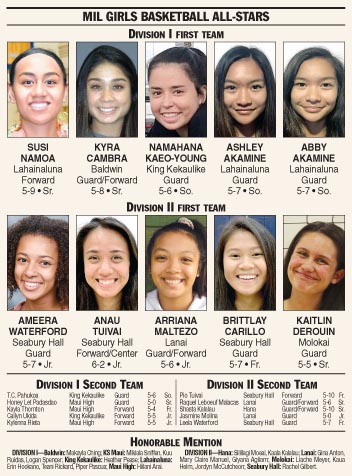 Namoa will continue her career in college. She has official recruiting visits scheduled for Clark University in Iowa, Cal State Monterrey Bay and Cal Poly during spring break. Alaska Anchorage, currently the home of Cameron Fernandez, a former MIL Player of the Year from Lahainaluna, has also jumped into the fray for Namoa’s services recently.

“She’s the one that actually got me comfortable into the program when I was a freshman,” Namoa said of Fernandez. “She was basically my best friend when she was down here. I did everything with her, so if I was able to go up there and play with her, man, it would be dangerous.”

Another standout from her Lahainaluna freshman season, Fiemea Hafoka, is in her second year as a team captain at San Jose State, the only current MIL graduate, boy or girl, to be on an NCAA Division I team.

Rickard and Seabury’s Keone Labuanan were the choices of their peers as MIL Coaches of the Year in D-I and D-II, respectively.

Waterford is a junior in Olinda and Namoa knows her well.

“We scrimmaged them before we went to the state tournament,” Namoa said of Waterford and Seabury. “I know the Seabury girls pretty well. … Congrats to her on winning. She’s a great player, she can handle the ball well. She controls her team. She’s the point guard and I think the game of basketball now is led by point guards. It’s a point guard game.”

“I was so excited to find out, I was really proud of how our team did this season, and then just to hear that I was named Player of the Year was a really exciting moment for me,” Waterford said.

Tuivai, a 6-foot-2 junior, won the last two MIL D-II POY awards. Waterford has been a teammate of Tuivai’s at Seabury Hall and on club teams for several years.

“Anau and I have played together for three years now and so we’ve really gotten to become close, both as both friends and teammates on the court,” Waterfortd said. “I think every year we get better and our team does better in tournaments. It’s just been a really great experience with her. I can’t imagine being on a team without her at this point.”

“Well, it’s fun to play with your sister because you’ve known each other forever, right?” Ameera Waterford said. “It’s good … Basketball season is always so much fun, but this year was especially fun because of how we did at states.”