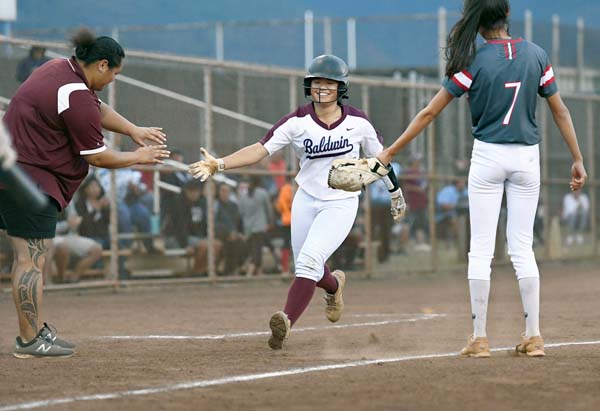 Baldwin High School’s Avei Silifaiva is congratulated by Bears coach Sanoe Kekahuna after hitting her second home run of the night in the sixth inning of the Bears’ 7-2 win over Lahainaluna in the Maui Interscholastic League Division I tournament championship game Friday at Patsy Mink Field. -- The Maui News / MATTHEW THAYER photo

KAHULUI — One night after they combined to play more than five hours with 39 hits and 35 runs between them, the Baldwin and Lahainaluna high school softball teams played a game Friday night that will force one more meeting between the two Maui Interscholastic League Division I powers.

Baldwin rode the two-hit pitching of Aliya Harmon and home runs by L.B. Kahahawai-Kekona and Avei Silifaiva to a 7-2 win over the Lunas in the MIL tournament final at Patsy Mink Field.

They will play for the overall MIL championship on Tuesday at Mink Field. The Lunas (11-3) will be looking for their third straight MIL title, while Baldwin (9-5) will be seeking its first since 2015.

Silifaiva is a junior left fielder who smacked two two-run homers — one in the fifth inning and one in the sixth.

“Never,” Silifaiva said when asked if she had ever hit two home runs in a game. “It felt great. My two at-bats earlier were not the greatest, so I just had a good mindset and struck the ball well. The first one I felt it was gone, the second one I was a little iffy, but I was, like, ‘whoa.’ “ 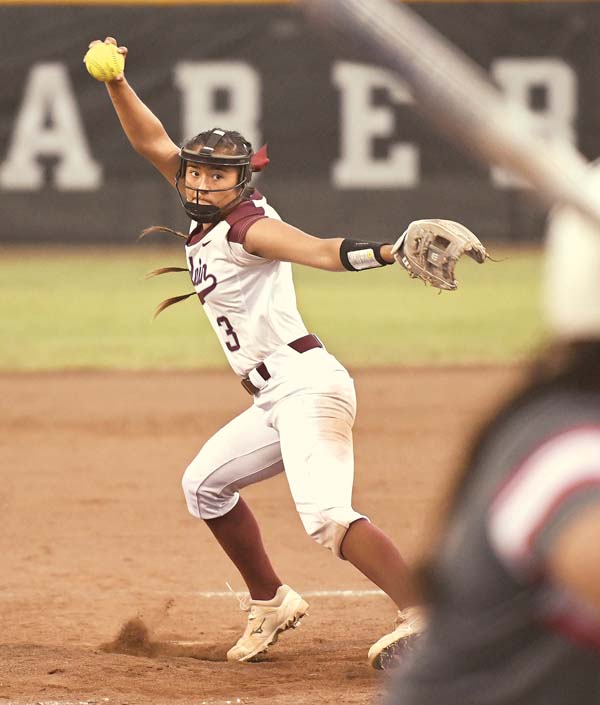 The Bears put up two important insurance runs in the top of the fifth when Silifaiva lined the first of her two-run homers well over the center-field wall to make it 4-1. Two batters later, Siena DeCambra doubled in a run to make it 5-1.

Meanwhile, the Lunas did not record a hit off Harmon until Keani Pagan’s bloop single to center to lead off the bottom of the fifth.

Harmon responded with two straight strikeouts before Ocean Makekau knocked in a run to bring the Lunas within 5-2. Harmon struck out Nohili Hong, the Lunas’ No. 3 hitter, to end the threat.

For the first time in her career, older sister Kaylee Harmon, a former Lunas standout who played collegiately at Western Oregon, was in town to see the younger Harmon pitch in high school.

“I felt great at first, a little nervous like always, championship game,” Aliya Harmon said. “But I had a lot of confidence in my team’s defense and our hitting and I knew we could do it.”

Silifaiva smoked her second two-run homer to nearly the same place to push the lead to 7-2 in the top of the sixth inning.

The Bears jumped to a 1-0 lead on freshman Kahahawai-Kekona’s solo homer in the top of the first inning. The Lunas evened the game when Daisha Dagdag scored on an error in the bottom of the first.

Baldwin took a 2-1 lead in the second when Alyssa Ferreira singled home DeCambra.

Harmon was in the circle last season when a passed ball allowed the championship-winning run to score in the Lunas’ 3-2 win in an overall championship game.

Tuesday will be a huge game for both programs.

“Super big, especially coming from last year,” Harmon said. “It was a very hard game since it was very close, one run, last inning, but we’re ready. This boosted our confidence a little bit, but Lahainaluna’s a very good team and we have to bring our ‘A’ game for sure.”

Harmon left no doubt that she wants the ball again on Tuesday.

“Oh, I want it so bad,” Harmon said. “I’ve been holding that loss for this whole season actually.”

Baldwin coach Sanoe Kekahuna said her team will be ready for the rematch.

“That was a really good game,” Kekahuna said. “Lahaina came to play today and it’s not easy when you’ve got to play a team like that. When you’ve got a good program like Lahainaluna and a good program like us, I mean it’s hard to beat. We did well. I applaud my pitcher for having a great game, her offense backed her up. We held our composure and we played the best we could.”

Lahainaluna coach Lei Nakamura is looking forward to one more game in the MIL season.

“Aliya came there ready to go, she took care of business on that mound,” Nakamura said. “They did amazing today. They came to play and they came out pumped, which is how it’s supposed to happen.”