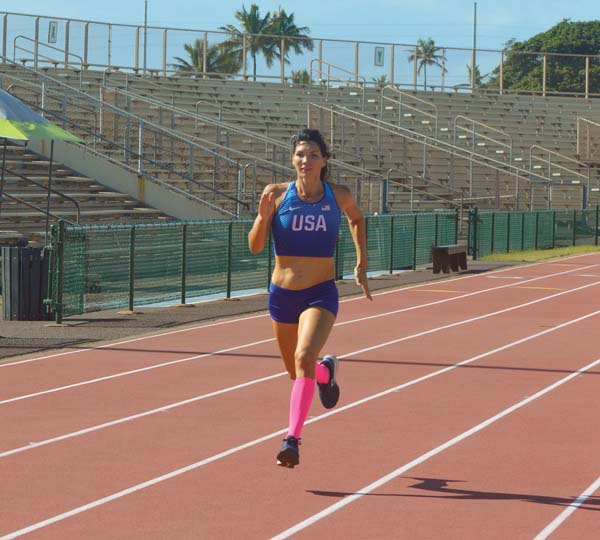 KAHULUI – With pink and white plumerias in her hair, Cynthia Monteleone raced against all odds during the World Masters Athletics Championship.

The 43-year-old mother of three from Lahaina won gold in the women’s 40-44 400 meters at the indoor world championships in Torun, Poland, late last month, finishing in a time of 58.17 seconds.

“It was such an honor to put on the blue Rio Olympics uniform to compete for Team USA. … The environment was full of excitement and expectations,” Monteleone said last week. “It feels great that all of my knowledge, training and hard work paid off.”

The journey to Poland from Maui totaled around 50 hours, she said. But the trip was worth every minute, as Monteleone also took home a fourth place in the 200 in 26.77 and pushed Team USA to gold in the 800 relay with a time of 1:46.69.

“I always wear flowers in my hair to pay respect to this beautiful island and the beautiful people that support me,” said Monteleone, who is also the Lahainaluna High School track and field coach. “I have supporters from all areas of the island. I’m so appreciative.” 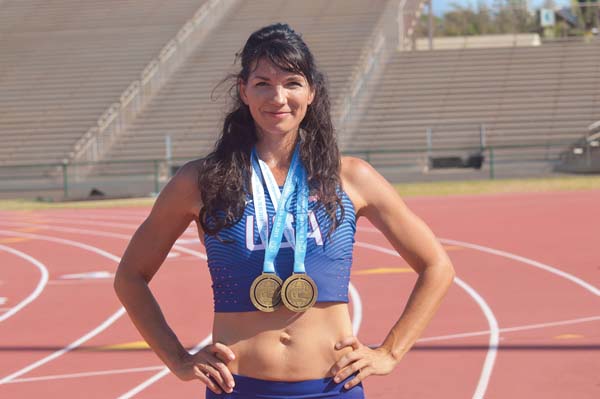 Monteleone wears her world championship medals earned from her 400 and 800 relay performances in Poland.

Monteleone is also the world leader in the outdoor 400 at 57.59, which was set at the Wendy’s Seahawk Invitational on March 9 at the University of North Carolina-Wilmington, her alma mater.

While the sport of track and field can sometimes intimidate the older population from competing, Monteleone doesn’t let her age be a deterrent. Her time in the 400 at the indoor world championships was faster than her collegiate indoor personal record set 24 years ago.

“It’s never too late to start,” she said. “In fact, I just took up learning shot put this year. You don’t even have to be a runner to join me in this adventure of masters track. Mentally, I don’t indulge in doubts. I just keep charging forward and upward with positive thinking.”

In February, Monteleone competed at the Millrose Games in New York City, where she anchored the 1,600 relay in the women’s 40 division. The team set a new national record of 4:07.63.

She competed for UNC Wilmington, but did not run much after graduating. Before her recent successes, Monteleone had taken about 20 years off from running, she said. 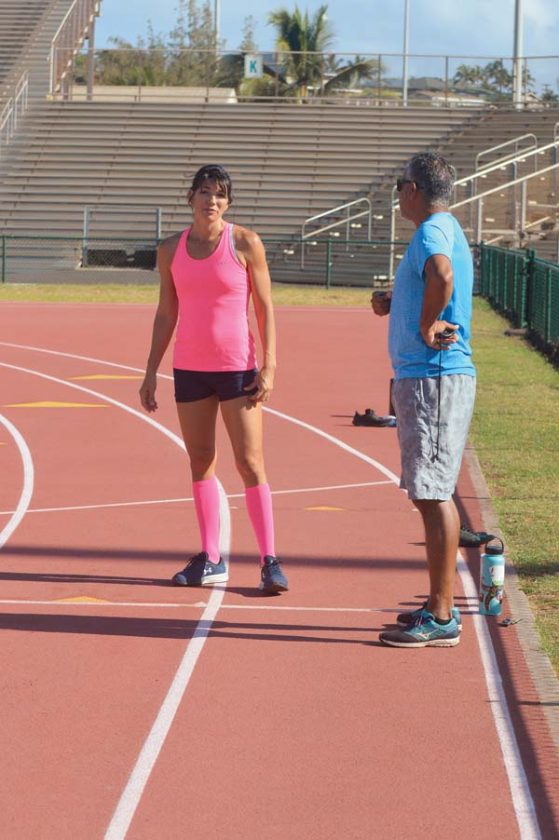 Monteleone found her passion for the sport again when her 14-year-old daughter Margaret asked her to train her for the 400. The rest of her family and coaches have also motivated her during her new athletic career, she added.

“I like to train in the mornings with my daughter and just focus on coaching the Lahainaluna kids at their practice,” she said. “I am honored to be in a position to mold the youth by imparting hard work ethic and technique into their training.”

While Monteleone knows a lot about running, she needed a coach too.

Rudy Huber, coach at Kamehameha Maui and race director for many local competitions, immediately saw the potential in Monteleone. The two Maui Interscholastic League coaches met a couple summers ago.

“I saw her training and knew she could go for the American record,” Huber said. “I believe she can do it.”

The American masters track and field record in the outdoor 400 for the 40-44 division is 56.90, less than second faster than Monteleone’s recent time. The record was set in 2016 by Latrica Dendy in Australia.

“I am very fortunate he is my coach,” Monteleone said of Huber. “I have no doubt that I will break that record this year and even run faster than my college outdoor times. I feel stronger than ever before.”

As a certified practitioner, Monteleone started MAM: Metabolic Analytics of Maui, a company that helps clients reach their nutrition and physical fitness goals. Through analytics, consultation and education, she helps everyday folks as well as elite athletes.

However, maintaining a healthy lifestyle, running and coaching, being a mother and wife, as well as operating a business, can get overwhelming sometimes. She said the key to balancing it all is keeping a positive mindset.

“We always have a choice in everything,” she said. “Every day, to give our best effort.”

Monteleone aims to keep her 400-meter ranking, break the national record and to “become fastest in history.” Her next competition is the USA Track and Field Masters Outdoor Championships, set for July 11-14 in Ames, Iowa.

“To know that I’m getting stronger and faster as I’m getting older feels amazing,” she said.