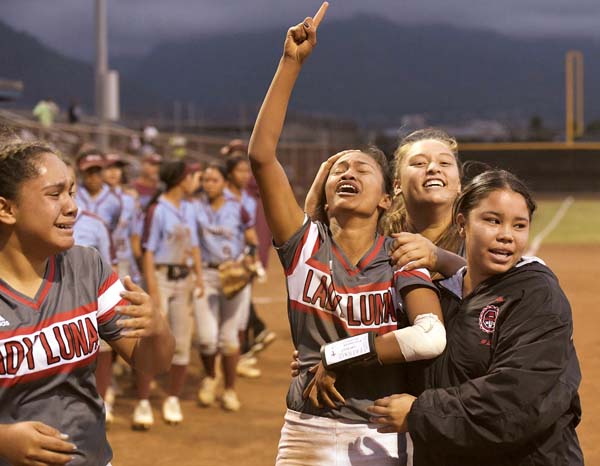 KAHULUI — This championship game lived up to its billing.

The Lahainaluna High School softball team scored five runs in the bottom of the seventh inning to walk off with its third Maui Interscholastic League Division I title in a row with a 5-4 victory over perennial nemesis Baldwin on Tuesday night under overcast skies at Patsy Mink Field.

Kaaina Kalanikau smacked a sharp single up the middle to knock in the tying and game-winning runs with two outs in the final frame that appeared to have ended twice moments earlier with the Bears still clinging to a lead they built entirely in the top of the first inning.

“Very good,” Kalanikau said of how she felt on the championship hit. “Crazy, very crazy. We always come back hard at the end.”

The rally began with a single to left field by Lily Kamaunu, who was the first out on a fielder’s choice grounder to second base off the bat of Keani Pagan. Briann Keokuloa then popped out for the second out, and the Bears appeared on the brink of their first MIL crown since 2015. Pagan took second on Keohuloa’s fly ball and for a moment, it appeared she was out at second base to end the game. However, the umpires ruled she had tagged up from first correctly, and the game went on. 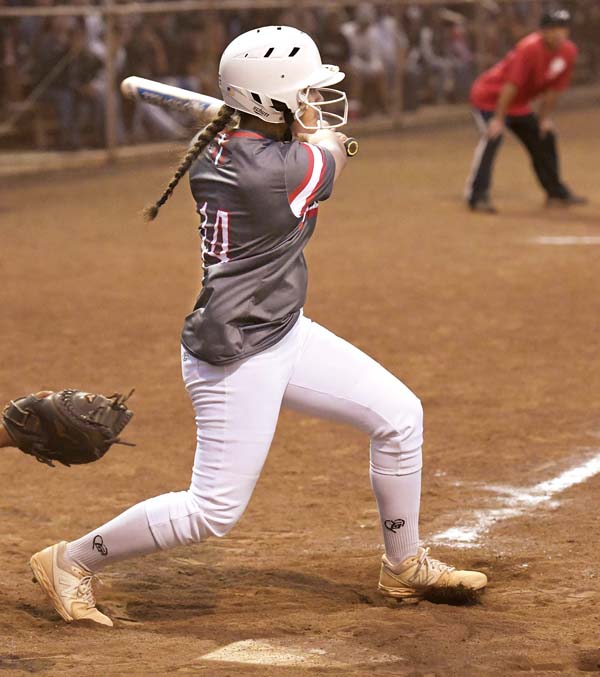 Kaaina Kalanikau follows through on a two-run, game-winning single Tuesday.

For the second time, the game appeared to be over when Dagdag was caught in a rundown after straying too far off of third base. Baldwin catcher Saree-Ann Kekahuna dove to apply a tag on Dagdag before she got back to third base, but the ball bounced loose and Dagdag was safe, setting the stage for Kalanikau.

The Bears built their four-run lead in the top of the first inning when two runs scored on an error and two more came home on Jessica Ai’s ringing double to center field.

Baldwin junior pitcher Aliya Harmon made that look like it would be enough until the fateful seventh. She did not allow a hit until the fourth, and the Lunas had just two hits through six innings. Only one of the runs she surrendered in the seventh was earned.

“I’m going to be honest, I’m speechless,” Lahainaluna coach Lei Nakamura said. “I don’t know what other words I can use, but you’re right. They did a great job honing it down, keep fighting, just all those things. Hats off to both teams because both teams played awesome. 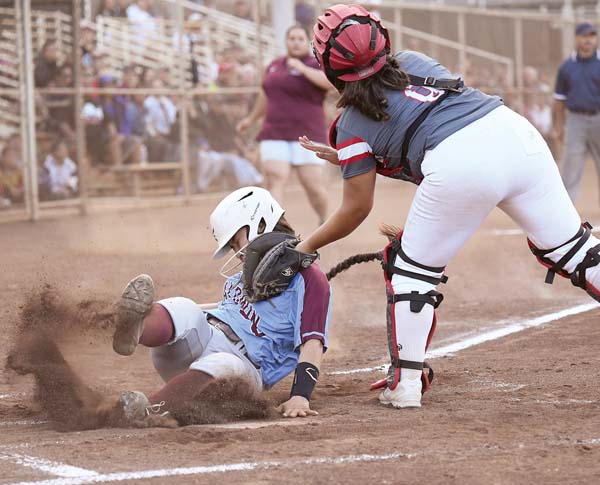 “Aliya, that’s a tough loss for her and I know that she’ll handle it. She’s going to bounce back. Hitting against her is not an easy task.”

Baldwin coach Sanoe Kekahuna tipped her cap to the Lunas, who won an overall championship game against the Bears last year on a walk-off run scored on a passed ball. The Bears (10-5) forced Tuesday’s winner-take-all championship game by beating the Lunas (12-3) 7-2 in the MIL tournament final on Friday behind a two-hitter from Harmon.

Both teams will be in the state tournament next week.

“Very good ballgame, Lahaina came in clutch today,” Sanoe Kekahuna said. “They have a great program, great coaches, great players. They came out to play. I give that exactly to them and congratulate Lahainaluna. They deserved it.”