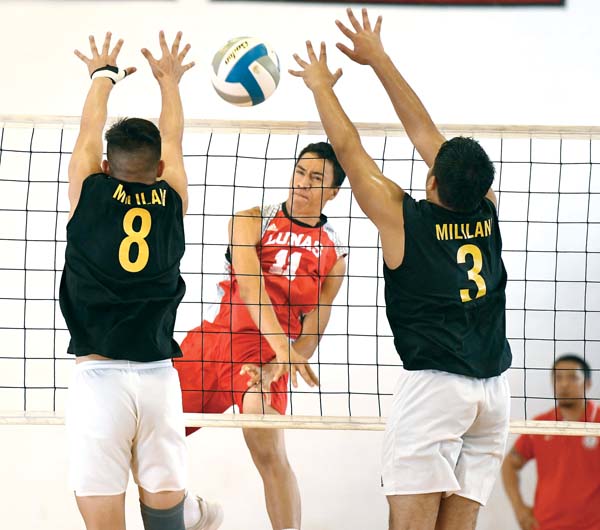 Lahainaluna High School’s Koi Kekona hits a second-set kill between the block of Mililani’s Nathan Looney and Caleb Pascual during the Lunas’ three-set loss to the Trojans in a Division I state tournament match Monday at the Lunas’ gym in Lahaina. The Maui News / MATTHEW THAYER photos

LAHAINA — It spelled the end of his stellar three-sport career for Lahainaluna High School, but Elijah Oliveira-Kalalau had a smile on his face as the realization set in as the sun was about to set over the Lunas’ gym on Monday night.

The football, wrestling and volleyball standout had 10 kills in a 25-19, 25-23, 25-10 loss to Mililani in the first round of the New City Nissan Division I State Volleyball Championship.

“To me, this was a great experience for me because I’m going to try to play any sport I can at the next, upper level,” said Oliveira-Kalalau, a three-time state champion for the football Lunas who plans to walk-on for that sport at Eastern Washington University. “To me, it’s just the fun of playing sports.”

No other player had more than four kills for the Lunas, who hung tough with the Oahu Interscholastic Association West Division regular-season champions. The Trojans lost to Castle in the OIA quarterfinals.

“To be active, to play against people with higher abilities and to be able to do all your school work at the same time, that’s what I like,” Oliveira-Kalalau said. 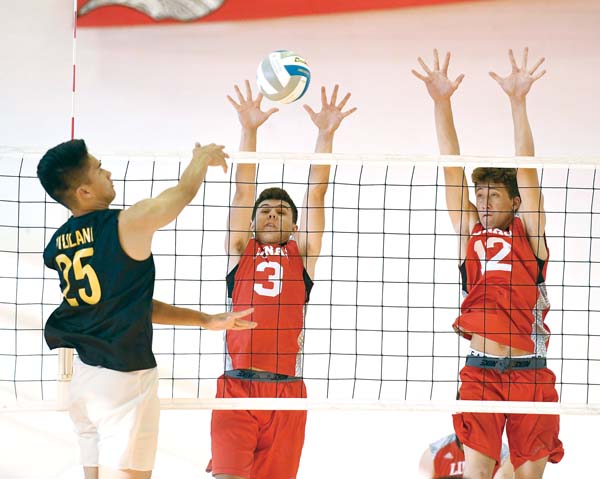 Mililani’s Christopher Guillermo attempts a second-set shot against the block of Lahainaluna’s Jonah Damasco and Tekoa Sonognini on Monday.

The Lunas (8-7) grabbed their first state berth since 2016 this year under first-year coach Marc Watasaki and will lose seven seniors from the roster that took the floor Monday.

“I think so, I think the season went alright,” Watasaki said. “It was a good year. I think we’ve laid a foundation for the future — we have the offseason coming up, we’ll be able to put together a program and really get to work on things.”

Lahainaluna trailed just 21-18 in the first set before Mililani ended it on a 4-1 run. 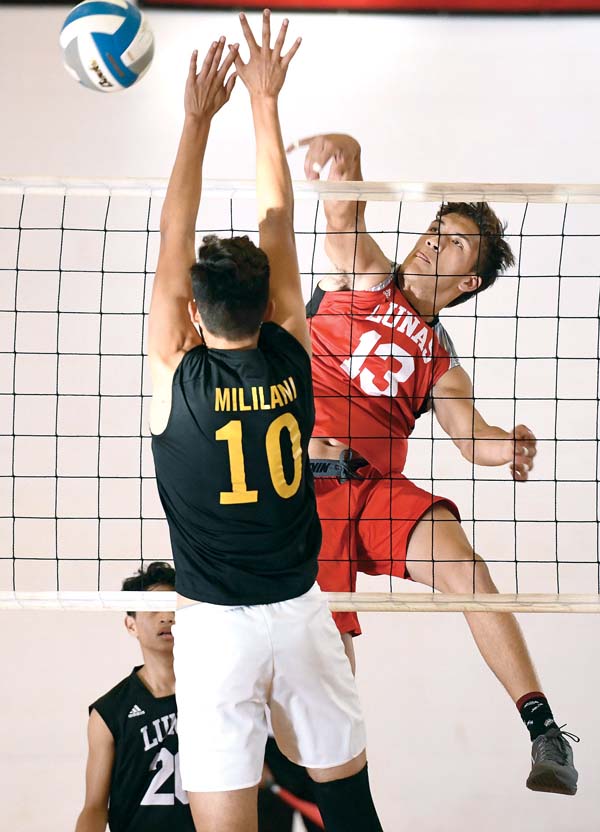 After falling behind 13-10, they closed within 13-12 on a block by Tufuga and tied it on a resounding kill by Oliveira-Kalalau. An ace by Kaleb Borromeo gave the Lunas a 14-13 lead. A second-hit dump by Jonah Damasco pushed the lead to 17-14.

An ace by Christopher Guillermo brought the Trojans within 20-19 and a mishandled set tied the set at 20. A hitting error gave the Trojans a one-point lead and brought a timeout from Watasaki. A kill by Caleb Pascual made it 22-20 and another hitting error pushed Mililani’s lead to three.

Oliveira-Kalalau’s kill brought the Lunas within 24-22 and Pascual sent a kill attempt long to make it 24-23. Pascual’s roll kill ended the set.

The Trojans rolled to a 13-5 lead in the third set, and the Lunas did not get closer than seven the rest of the way.

“They’re very good,” Watasaki said of the Trojans, who got 10 kills from Pascual. “They won the West, they’ve had some great, outstanding players come through that program. (Mililani coach) Trent (Niino) is a great coach — they have a solid program. I think we’re close. I think we showed we can compete.”

Niino was pleased with the way his team responded to the trip, their second win on Maui in three seasons in the HHSAA first round.

“This is a very interesting gym,” Niino said. “First time we’ve played in a gym where the crowd was right behind the bench. That was a very big mental test for our players and even as a coach.”

Niino said his team passed the test, but they knew the Lunas would come to play.

“Lahainaluna, they’re a great team, we played them at Seabury Hall in a preseason tournament,” Niino said. “They were a good team then and they’re still a great team now. Hats off to them, they played well. They were digging a lot of balls, the second set we were putting the balls down and they were digging everything up.”

Niino and the Trojans now get OIA champion and No. 2 seed Moanalua in Thursday’s quarterfinals. Niino said that Monday was a business trip for the Trojans, but added that they would be stopping at Krispy Kreme on the way to the Kahului Airport.

Niino called a late timeout in the second set that seemed to turn the tide.

“I told the boys, ‘This is unacceptable, we’re not playing our game, we need to play our best, play like the team that we can be, which is the team that went 10-0 and undefeated in the (OIA) West,’ “ Niino said. “Moanalua, we’re stoked. We’ve been wanting to play them from the beginning of the season.”