Mitsumura takes over lead at MILs

Calibuso-Kwee up by six shots over Guzman after hot, tough third round at Makena 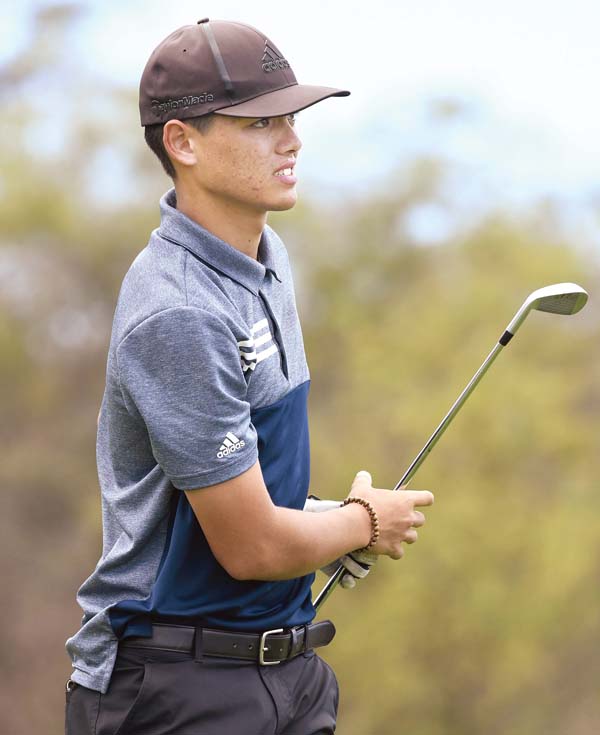 MAKENA — The heat is definitely on in the Maui Interscholastic League individual golf tournaments.

Kamehameha Schools Maui senior Jordan Mitsumura vaulted into the lead from 10 strokes behind and sixth place after firing a 1-over-par 73 at Makena Golf Course on Saturday to take a two-stroke lead into the final round next Saturday at the Kaanapali Kai Course.

“It felt really good because coming into this, I mean, I’ve only played this course once and this course is so nice,” Mitsumura said. “Everything was just working out today pretty (well) for me.”

Five boys will start the final round separated by five shots.

Maui High’s Marlon Bottorff (79) and Lahainaluna’s Matt Ramelb (78) are tied for second at 239, Maui Prep freshman Caleb Chumley (81) is fourth at 240, and second-round leader Pierce Dowd of Seabury Hall is still in the mix, two more strokes back, after fighting flu-like symptoms to shoot 88 on Saturday. 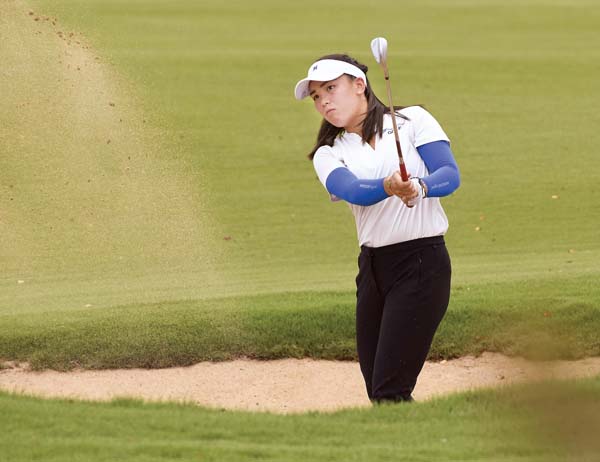 The sun-baked course that has a long walk between the front nine and back nine took its toll on the golfers on Saturday, with the exceptions of Mitsumura and girls leaders Lana Calibuso-Kwee of Baldwin (73) and Reese Guzman of Maui High (72).

“It was super hot today, but as long as you have a hat and try to stay in the shade, and eat and drink as much as you can to stay hydrated, you’re probably going to make good decisions out there,” Mitsumura said.

It was an up-and-down day for nearly everyone. Guzman had six birdies and six bogeys in the best round of the day, boy or girls. Calibuso-Kwee had just nine pars.

“It was really hot, I think I might have gotten light-headed out there,” Guzman said. “It’s a super long walk. It was OK, the conditions, because there wasn’t any wind, but I think the heat had a lot to do with it.”

Guzman is the two-time defending MIL champion and two-time state runner-up. She has signed to play next season at Pepperdine and was told recently that the Waves will be in the Spring Break Anuenue Classic hosted by the University of Hawaii at Kapalua next year. 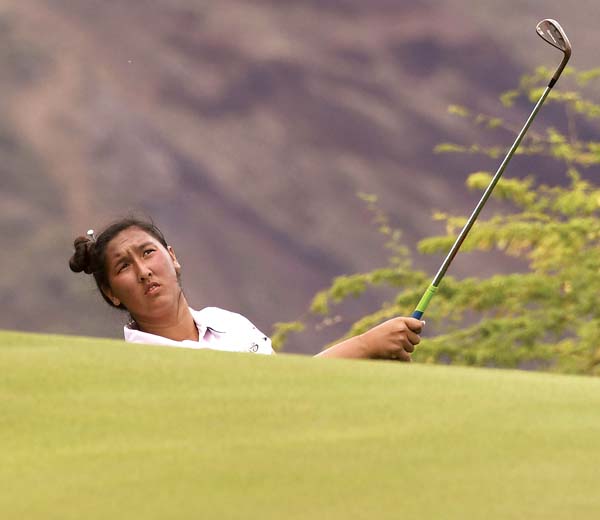 First, one last round in the MIL and a run at state are on the docket.

“We’ll see,” Guzman said of a possible charge at Calibuso-Kwee. “I like that course, it’s flat. You don’t have to walk as much. And, yeah, (state title), that’s pretty much the end goal, but we’ll see how it turns out.”

Calibuso-Kwee said she battled the heat as well.

“It was ridiculously hot,” she said. “I think I drank three of my Hydro Flasks, about four water bottles. Then I drank a vitamin water, an orange juice and a Gatorade.”

The Baldwin sophomore knows that Guzman will be a on a mission next week.

“I really, really want to be the MIL champ, but whatever happens happens,” Calibuso-Kwee said. “Reese is really good, so … Six (shots) is a lot, but we have 18 more holes and that’s really everything right there.”

Like Guzman, Mitsumura said he had to battle through the heat on Saturday.

Ramelb was 3-under par on the front and struggled on the back.

“It was 14, 15,” Ramelb said of his big troubles on the back. “I got a triple (bogey) and I went back-to-back with another triple on the next hole. Then, the next hole I bogeyed, parred, and then I finished with a double (bogey).”

Ramelb likes his chances next week at Kaanapali.

“I feel like I have a good chance because it’s my home course and I know it very well,” Ramelb said. “I feel a little bit nervous, but it’s OK. I can overcome it when I’m on the course.”