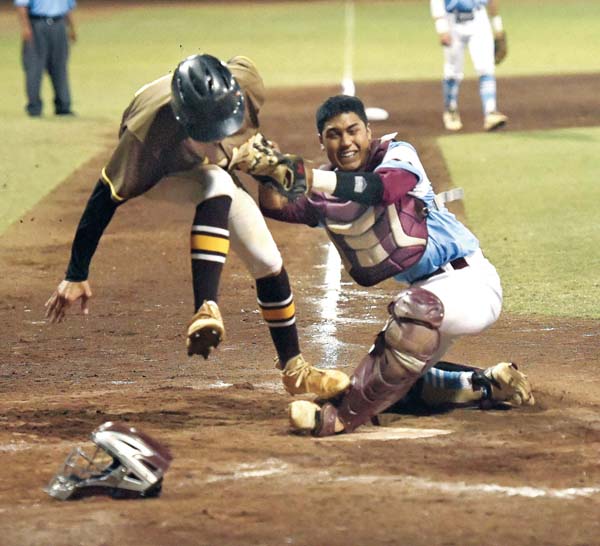 WAILUKU — An amazing run for the Baldwin High School baseball team ended on a wild pitch Friday night at Maehara Stadium in the semifinals of the HHSAA/Wally Yonamine Foundation Division I state tournament.

Mililani ran off with a 2-1 win when a wild pitch from Baba Varner scooted under the glove of catcher Cade Kalehuawehe and to the wall, allowing John Suehisa to score the game-winning run in the bottom of the eighth inning.

Baldwin (15-1), the top seed and winner of two of the last three state championships, saw its 23-game overall winning streak snapped and will play Hilo for third place today at 3:30 p.m.

“Of course, this is a special team, but we let the guys back in the game,” Baldwin coach Shane Dudoit said. “We didn’t take care of the ball when we should have, but you know what? This is what we play for — somebody’s got to lose and someone’s got to win and we just didn’t come out on top.” 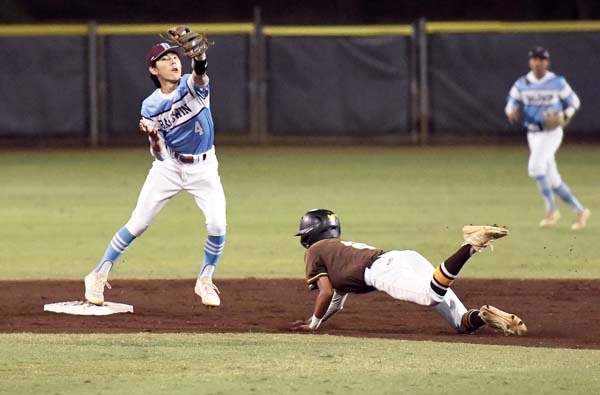 Ben Zeigler-Namoa, a left-handed sophomore, was forced into duty on the mound when scheduled starter Roy Meinen was scrubbed with stomach issues.

Zeigler-Namoa did not get into much trouble until the fourth when he walked the first two batters to bring up No. 3 hitter Ethan Thomas, who bunted right back to Zeigler-Namoa, allowing the pitcher to throw out the lead runner at third base for the first out.

Vance Oshiro took third base after falling down off of second and drawing a throw behind him. He scored to tie it at 1-1 on a sacrifice fly by Charles Winchester.

The Trojans did not get their first hit until a single to right field in the fifth inning by Micah Kaohu, but it ended up on a gem of a defensive play by the Bears.

The ball grazed the glove of first baseman Mochi Dukelow and bounced out to right fielder Varner, who threw a rope to catcher Kalehuawehe to nail Waika Fukuda at the plate as he was trying to score from second base. 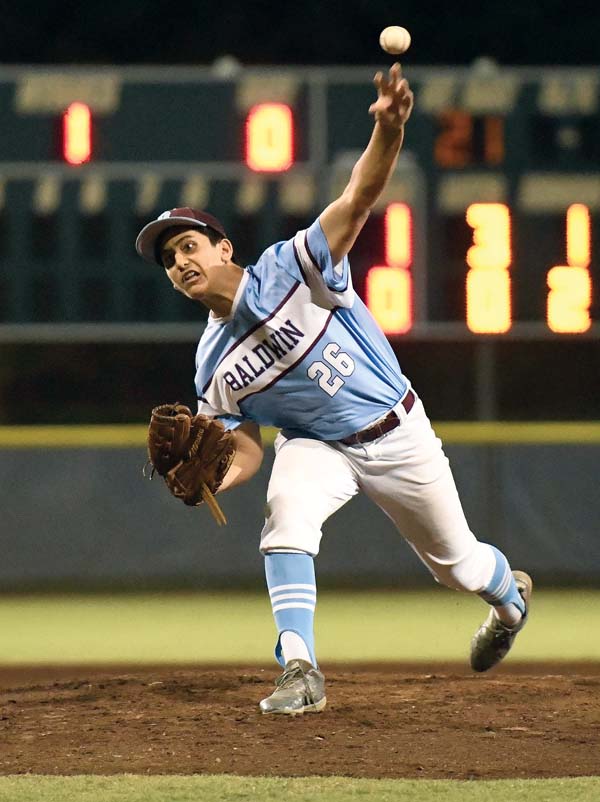 Kalehuawehe spiked the ball on the ground and the play seemed to energize the Bears momentarily.

Varner led off the top of the sixth with a sharp single to right. Kalehuawehe then smoked a long fly ball to right-center field that right fielder Jayton Pang ran down and caught for the first out.

One inning earlier, Dukelow was out at the plate on a squeeze bunt by Haku Dudoit. Baldwin got a one-out walk to Reyn Okita in the eighth, but he was left at first base.

The Bears jumped on top 1-0 in the second when Makane Honokaupu, courtesy running for Zeigler-Namoa, scampered home on an RBI single by Dukelow. 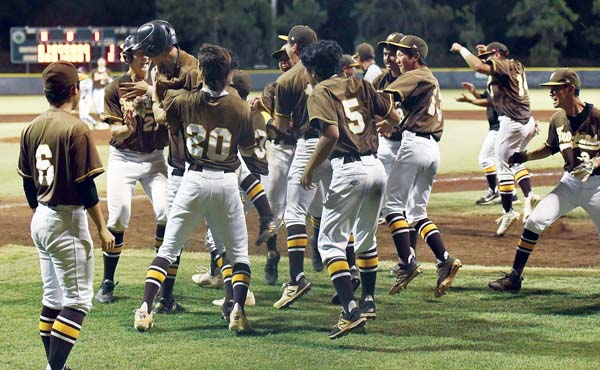 Baldwin had two baserunners wiped off the bases when Dudoit led off the first with a walk and was caught stealing, and when Dukelow was doubled off of second base when he misread an infield fly ball off the bat of Adam Yamashita.

The Bears defense was stellar all night.

Yamashita dove, stopped a screaming groundball off the bat of Thomas, rose and made a quick throw to end the first inning. After an error put a runner on to begin the second for Mililani, Yamashita started a nifty 4-6-3 double play on a ball hit by Taylor Inouye.

Cody Constantino came on in the sixth inning and gave up a lead-off single to Suehisa, who was sacrificed to second and took third on a wild pitch, sliding around the tag by third baseman Haole. Constantino struck out Thomas, the Bears intentionally walked Winchester and then Constantino ended the threat with a strikeout of Inouye.

Varner came on with one on and one out in the eighth, and the Bears decided to load the bases with back-to-back intentional walks after a wild pitch moved Suehisa to third base.

Baldwin is now 45-5-1 over the last two seasons — the Bears finished ranked eighth in the nation last season by USA Today — and will send seven seniors into the real world with two state gold medals.

“It’s OK, it’s OK,” Shane Dudoit said. “I think any loss is tough no matter what, no matter at any point in their career. Hopefully this is something they can build off of next year and realize the importance of doing certain things at practice and at home and work off of that.”

Mililani coach Mark Hirayama was stunned at the end.

“They are a quality team and things weren’t going our way at the beginning, just trying to stick with it, try to keep it close and good things happened at the end for us,” he said. “This time of year is fun. You want to be in this situation, you know, it’s great for the kids. It’s a character builder.”