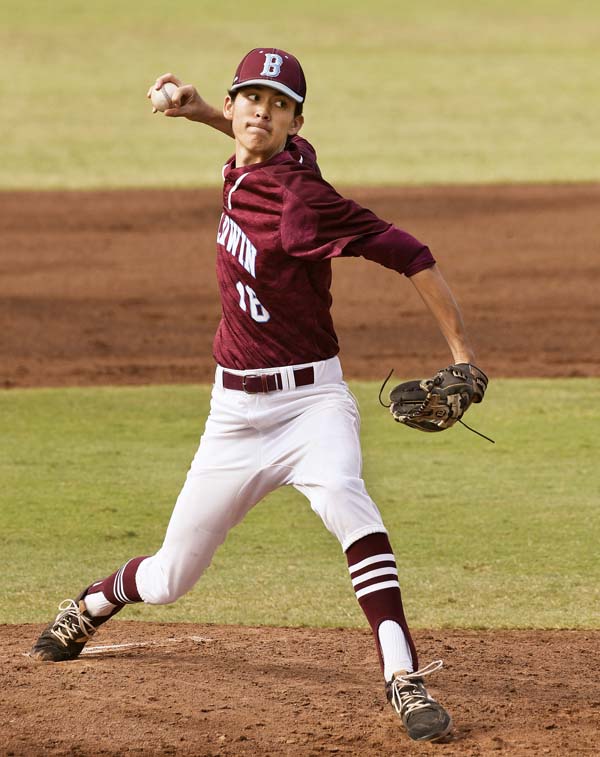 Roy Meinen of Baldwin High School pitches in the third inning of the Bears’ 2-2 tie with Hilo in the Division I state tournament third-place game Saturday at Maehara Stadium. -- The Maui News / MATTHEW THAYER photo

WAILUKU — It wasn’t the game they wanted to be in, but the Baldwin High School baseball team had fun in the third-place game of the HHSAA/Wally Yonamine Foundation Division I state tournament on Saturday.

The Bears walked off the field with a 2-2 tie with Hilo in a game that was a chance to bid aloha to impressive senior classes for both teams.

“You know, it’s about these kids, it’s about the time and effort that they put into our program,” Baldwin coach Shane Dudoit said. “Our program has been around for a very long time, teams come and go. This is a great bunch of kids, even I got a little bit emotional. When you see these guys for three hours every day, they become a part of your family. They come over to your house. It’s tough, but you know, it’s got to be done every year.”

The Bears scored first on a RBI single by senior Cade Kalehuawehe that drove in Haku Dudoit, who was hit by a pitch to lead off the game.

Hilo tied the game in the bottom of the first on a run-scoring single by Dayson Urbanozo-Moses. The Vikings took a 2-1 lead on an RBI single by Ryan Cabreira that drove in Tobey Jackson, who tripled to start the second inning. 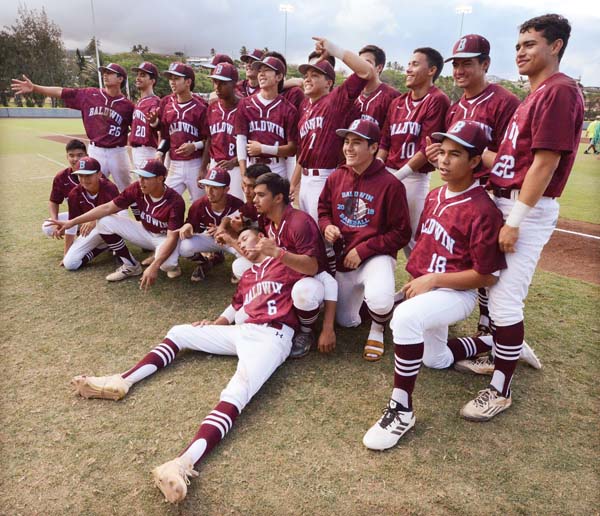 The Bears tied the game in the top of the third inning when Kalehuawehe lined his second two-out RBI single to center. A balk then moved runners to second and third, but Kaipo Haole grounded out to end the inning.

With one out in the bottom of the fourth, coach Shane Dudoit sent out replacements all over the field to bring out seniors Kalehuawehe, pitcher Roy Meinen, first baseman Mochi Dukelow, right fielder Baba Varner, second baseman Cody Constantino and shortstop Haole.

Hilo did a similar move in the top of the fifth.

Meinen, the winner in the state championship game last season, was able to pitch three innings, allowing five hits and both runs on Saturday. He was written onto the lineup card on Friday, but was scrubbed with the flu right before the start of the Bears’ 2-1, eight-inning loss to Mililani in the state semifinals.

“He just came down with a bad case of the flu and I didn’t think he wanted to be on the mound and something wanted to come out the other end. We needed to make sure that didn’t happen, especially with our white pants,” Shane Dudoit joked. “Roy pitched well today.” 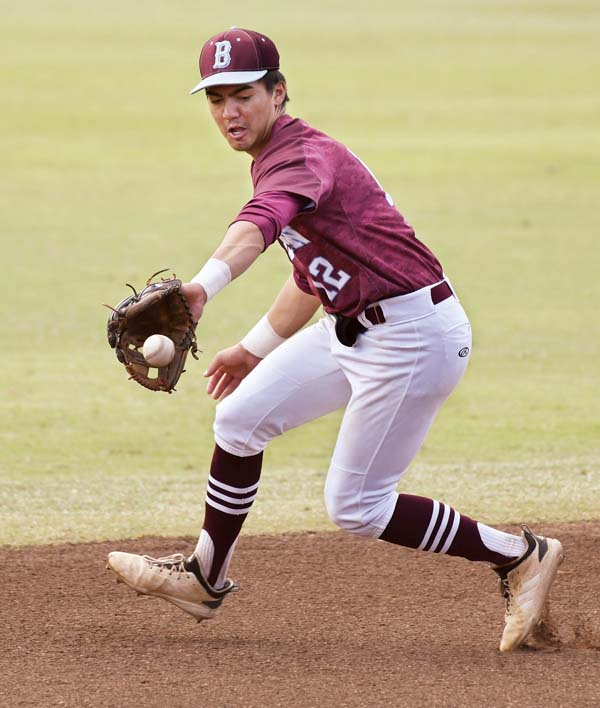 The Bears have a loaded roster coming back, even with the departure of seven seniors — the final one, Tristan Aplanalp, also got into the game as a defensive replacement in the outfield on Saturday.

“I like what I see for next year,” Shane Dudoit said. “They trust and know the process. They’ve never given me a hard time at practice. They understand. The senior leadership makes it a whole lot easier as well.”

Adam Yamashita, a junior second baseman, gave up his starting spot to Constantino on Saturday. Yamashita did pitch an inning in the game.

“I will miss them a lot, they are great role models,” Yamashita said. “They inspire me to do better in life and on the field, too. I just wish the best for them to continue their dreams and pursue baseball in college and furthermore, as far as it takes them.”

Hilo coach Baba Lancaster said he was happy to share the stage with Baldwin. 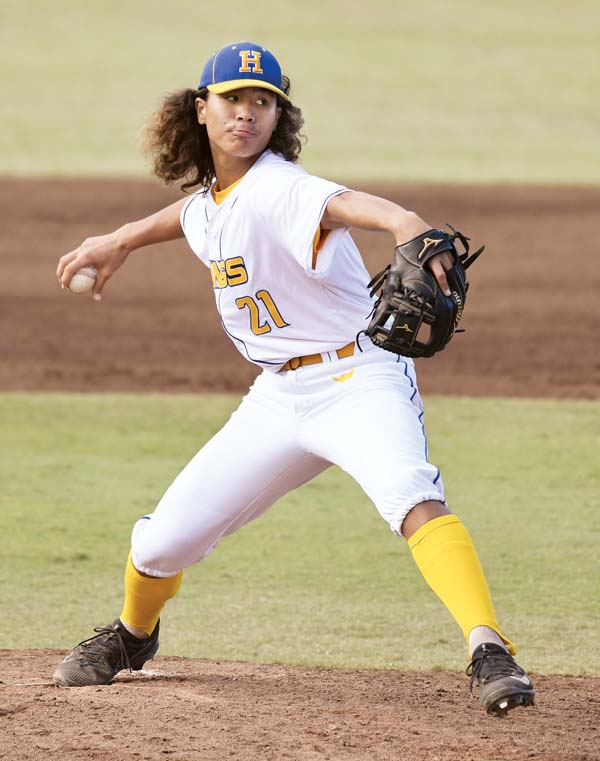 “Baldwin is always tough — I know all the coaches, the coaches and I, we’re all close,” Lancaster said. “I mean, to me, this is the championship game right here.”

“Before the game started, he had the same plans that I had,” Lancaster said. “We said we were going to do it in the fourth inning, but we had to do it in the fifth. For the seniors, it’s best. I feel for them because this is their last year, it’s my first. They took me for a great ride. … I’m very proud of them.” 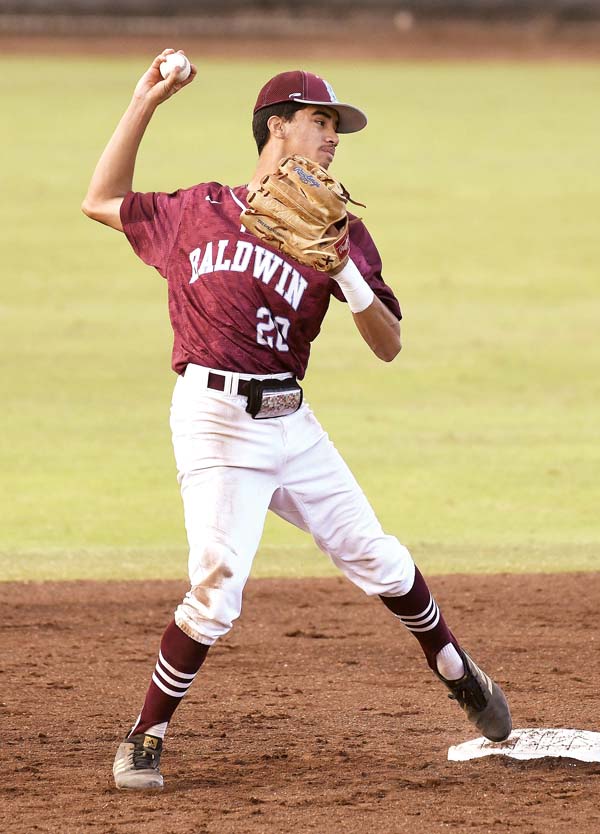 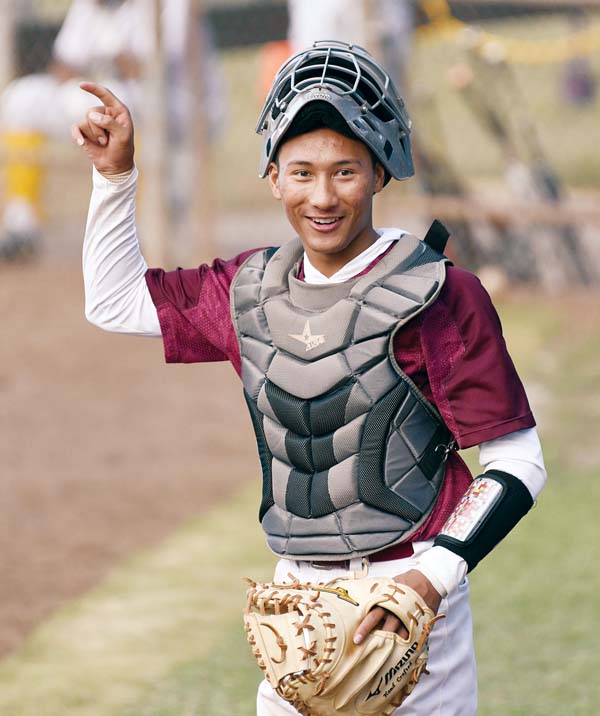 Baldwin’s Haku Dudoit checks with his dugout after subbing in at catcher for Cade Kalehuawehe. -- The Maui News / MATTHEW THAYER photo

The Warriors rode a combined two-hitter by six pitchers to claim fifth place.

Vincente Venenciano, a Molokai native, and Hanu Ra­coma each had two hits for Kamehameha Kapalama (16-9).

The Crusaders captured seventh place behind a combined six-hitter by three pitchers. Reliever Pedro Semorile picked up the win with two scoreless innings.

Campbell (13-5) had six players with one hit apiece.