Hoopii-Tuionetoa taken by Rangers in 30th round 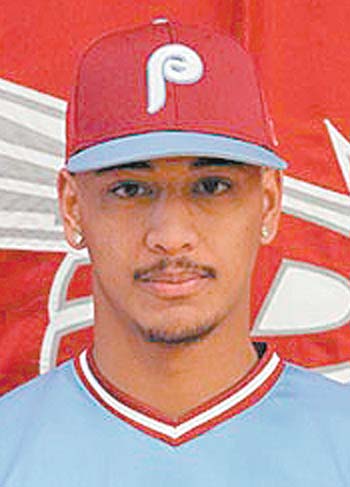 A year older and wiser, but still two months short of his 19th birthday, Maui’s Bubba Hoopii-Tuionetoa said he plans to sign a professional contract after the Texas Rangers selected him in the 30th round of the Major League Baseball draft on Wednesday.

Last year, Hoopii-Tuionetoa decided to attend Pierce College in Puyallup, Wash., after he turned down a $100,000 signing bonus from the Minnesota Twins, who selected him in the 16th round.

“I mean, second year in a row, not too many people really get a chance the first time,” Hoopii-Tuionetoa said after attending classes on Wednesday. “The Rangers giving me another opportunity means a lot.”

He said he is intent on signing after talking briefly with the Rangers’ Northwest scout Gary McGraw on the phone Wednesday. School ends at Pierce next week.

“Really excited, I can’t wait just to put on the Texas uniform,” Hoopii-Tuionetoa said. “I don’t even have words for it right now.”

After signing, McGraw said Hoopii-Tuionetoa will head to the Rangers’ facilities in Surprise, Ariz., for Rookie League ball this summer before instructional league beginning in September.

Hoopii-Tuionetoa was the consensus state player of the year for the state-champion Baldwin High School team that finished ranked eighth in the nation by USA Today in 2018. When he was not on the mound, he was a stellar defender in center field.

“He’s a great young man, he’s a great athlete,” McGraw said. “You don’t find many guys that can be multiple-position guys. It’s tough enough to get to the big leagues in one spot, but we really think he’s got a future on the mound. We think he’s got a chance to be a starting pitcher because of the way his pitches are developing, how the mix is developing.

“His breaking ball, his change-up this spring compared to last fall and, of course, high school — when we had another scout Stevie Flores who did a great job with him — he’s made some leaps and bounds. That’s got us excited about him on the bump.”

Baldwin head coach Shane Dudoit is also a scout for the Rangers — McGraw made sure to praise the work Dudoit has put in with Hoopii-Tuionetoa, whose given first name is Anthony.

“He has done a great with Anthony, with Bubba, with our organization because this has been a two-year process,” McGraw said. “We were on him last year and we were really hopeful we could get him last year, but if it wasn’t for Shane … he has really helped us out in this whole thing. I know he’s got Bubba’s trust and the family’s trust.”

When asked directly if he plans to sign, Hoopii-Tuionetoa said, “Yes. … I’m 100 percent leaning to signing.”

“It was one of those things — he came in as a special arm talent,” Davis said on Monday. “Good hand speed, we were just excited to have him. … He’s got next-level speed for sure, and he can run it down in the outfield. His bat speed, he’s got everything. He’s a complete athlete.”

Davis, a former minor league pitcher himself, emphasized the mental game for Hoopii-Tuionetoa.

“I’d say midpoint of our season, we had some conversations and he started to relax,” Davis said. “He was able to soak up the information and make some adjustments out there on the mound. Watching him grow was fun this year.

“For me, that (mental game) is the separator. Everybody’s got the talent there, it’s who has got the mental game — that’s what decides who keeps moving and who doesn’t.”

Said Hoopii-Tuionetoa: “That was his big thing, mental preparation. … From high school to now, that has changed a lot, I’m kind of more savvy. I’m more of a pitcher now instead of just a thrower.”

Hoopii-Tuionetoa said he was not worried as his draft position slipped past where he went a year ago. He said his thought process was a huge difference from last year when he sorted through the draft experience as a 17-year-old.

“I wasn’t too worried about it,” he said. “I wasn’t really stressing or trying to wrap my head around it. I was just going about the day, just letting the time pass, you know, it’ll come eventually. I just waited it out and sure enough I heard my name.”

Davis said he sees big things ahead for Hoopii-Tuionetoa. Baba Varner and Cade Kalehuawehe, both 2019 Baldwin graduates, are both headed to Pierce to continue their careers and may be joined by standout pitcher/third baseman Kaipo Haole, who is still pondering his baseball future.

“The sky’s the limit for (Hoopii-Tuionetoa),” Davis said. “I made the comment that at some point in his career he’s going to touch 100 (mph). With the arm talent he has, it would not surprise me if we saw some triple-digits out of that arm.”

When he saw his name come up on the draft tracker at MLB.com, Hoopii-Tuionetoa said: “My eyes came big. I was, like, ‘Wow, are they really drafting me again after last year?’ It was kind of a shocker. I’m like, geez, to be 17 years old and then 18 years old and be drafted twice already. It was crazy.”

Now, he is ready to begin his professional baseball journey.

“It might now have been a higher round, but you know it’s something and you’ve got to thank God for that, for the opportunity,” Hoopii-Tuionetoa said. “The window is so small for so much people, so even if it’s the 30th round, you’ve got to take the opportunity and make the best out of it.”

Oahu workers who went to Lanai positive for virus