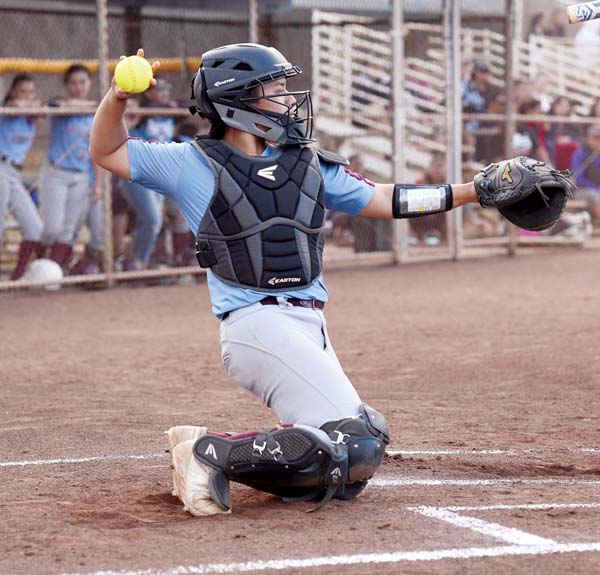 Kekahuna, the Baldwin High School catcher for the past four seasons, is headed to Weber State University in Ogden, Utah. Horner, the do-everything leader for Molokai High School, will play at Everett (Wash.) Community College.

Horner, who will play with her twin sister Cami at ECC, and Kekahuna, whose older sister Sanoe is the Baldwin head coach, were chosen by the league coaches as The Maui News MIL Players of the Year for their respective divisions.

Saree-Ann Kekahuna got the word from her sister, who had a standout college career at California Berkeley, that she had earned the D-I POY nod. 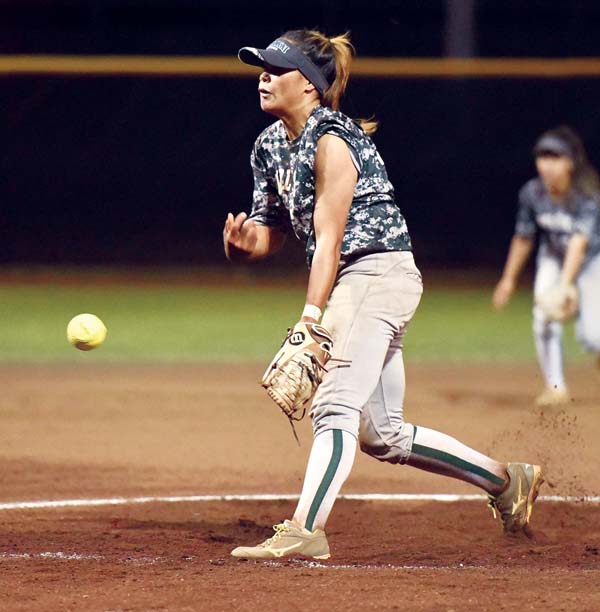 Cahlvrie Horner led Molokai to the MIL Division II title and a spot in the state tournament, where the Farmers went 1-2. ­The Maui News / MATTHEW THAYER photo

It was an up-and-down season for the Bears. They gave up five runs after two were out in the bottom of the seventh of a 5-4 walk-off loss to Lahainaluna in the MIL championship game before advancing to the final four at the state tournament.

“I would say that this year was very team-oriented,” Saree-Ann Kekahuna said. “I think we failed and we did good because of our team. A big reason why we did good in states is, like you said, because it was heartbreaking in that MIL championship (game). Learning from those mistakes, little mistakes, and taking that fire with us to drive us into states really helped.” 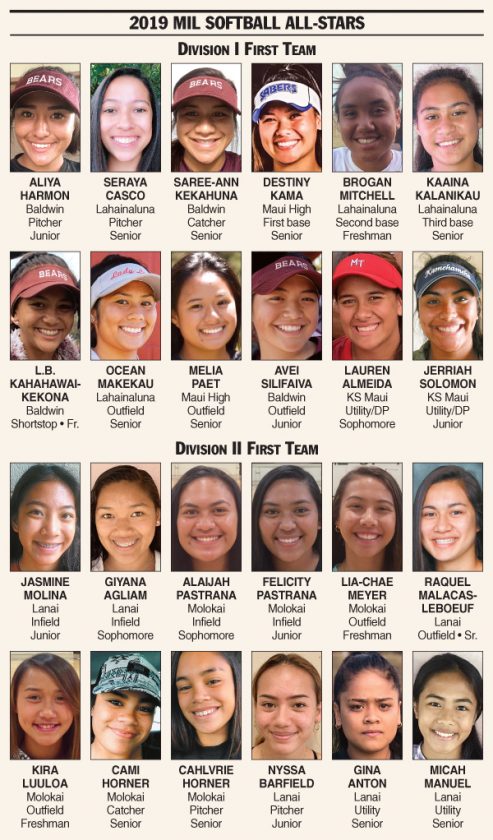 Kekahuna, whose father also helps with the team, said this Baldwin softball unit became like family at the end of the season.

“Growing a bond with the girls was a big one for me,” she said. “I think that’s why we were so successful, getting to know each other outside of the field and then coming together and making that connection on the field really helped us. I really enjoyed this year.”

The bond between sisters clearly evolved as Saree-Ann grew up behind the plate for the Bears.

“I would have to say I wouldn’t want to play for anyone else,” Kekahuna said. “With the opportunity to be able to play under my sister, anybody would want to play under their family member. I think the one thing that I’ve grown from my freshman year to my senior year is learning her little aspects of the game from her playing side in the past, from player to coach.”

“A big one from my freshman year was her saying: ‘I wish I could give you my knowledge.’ It was something I couldn’t understand back then, but playing that last game in states, or my last MIL season here on Maui, it really hit me — now I know what she meant,” Saree-Ann Kekahuna said. “She’s really been awesome and I appreciate everything she does for us and our team. … Away from the field, it’s sister and sister. When we get back on the field, it’s coach to player.”

Cami Horner was the MIL D-II Player of the Year last season.

“That’s very cool, I wasn’t expecting it, actually,” Cahlvrie Horner said of joining her sister as Player of the Year. “It’s awesome. You know, we get on each other’s nerves, but it’s always fun playing with my sister because we just have a connection. That’s just how twins roll, I guess.”

MIL championship coaches Lei Nakamura of Lahainaluna and Lacey Santiago of Molokai are the league’s coaches of the year.

“Me and my sister, when we’re on the mound, she’s behind the plate, we just have that connection,” Cahlvrie Horner said. “We know what to pitch, we just read the batter every time they step up to the box, and we just know what to throw.”