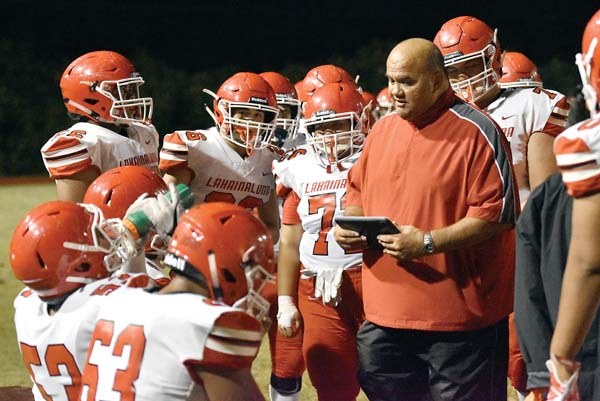 He is following a decades-old plan that has been developed over time and has blossomed into three straight Division II state championships for the Lunas.

Now, Rickard, a 1982 graduate of the oldest school west of the Rocky Mountains who went on to play college football at Eastern Oregon and Chadron State universities, has climbed to the top of the Lunas’ coaching ladder.

He has assumed the offensive coordinator and co-head coaching duties that Garret Tihada stepped away from recently. Rickard moves up from being the assistant on the veteran staff in charge of the offensive line.

“Garret, I mean, what can you say? And everybody thinks Garret is gone, but he’s not gone for sure — he is on a temporary hiatus,” Rickard said via phone Friday from the Big Island, where the Lunas are scrimmaging teams from Hawaii Prep and Keaau. “For me, anyway, it’s not much of a transition, but more of a shifting responsibility. As offensive line coach, my main focus was taking care of the blocking schemes within the box. Of course, all of that will change this year.” 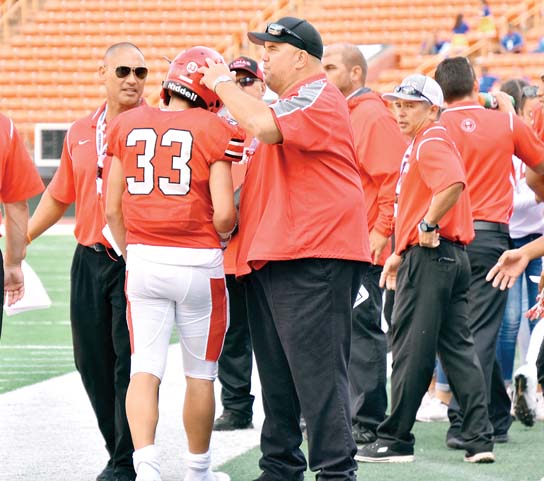 Rickard will have six offensive starters back from their state championship win over Kapaa last November, including senior quarterback Nainoa Irish and running back Joshua Tihada, the all-time leading touchdown scorer in Hawaii state tournament history.

“I think what Garret left, you know his legacy, and what will continue is an offensive staff — we’ve been together so long, we kind of just feed off of each other,” Rickard said. “With the exception of (Tihada) leaving, our offensive staff will continue business as usual. We’ll see pretty much the Lahainaluna team you’ve seen over the last several years.”

The Lunas must replace three graduated starters on the offensive line, but they have junior giants T.J. Galoia (6-foot-1, 305 pounds) and Hookipa Sakalia (5-11, 250) back after being starters as sophomores.

“We’re looking to bring in the underclassmen, the JV players to step in those starting roles, but that’s what we’re here for up in Keaau, to evaluate the younger players,” Rickard said. “See what they have to offer and start putting together our tentative lineups. T.J. and ‘Kipa are definitely good building blocks for our offensive line.”

Joey Tihada is in charge of running backs, Randy Arakawa is the receivers coach, Kekoa Mowat moves into the offensive line duties, Craig Wise is the tight ends coach and Nollie Smith will work with the quarterbacks.

With returning receivers Kai Bookland and Devon Sa-Chisolm to work with, the Lunas will continue to augment their familiar single-wing running game with a passing attack.

“I think having that type of players, it opens up the possibilities and the different options available to us scheme-wise,” Rickard said. “If they key on them, that leaves someone else open. It’s always good to have that kind of flexibility, no doubt.”

Rickard added that Esekielu Storer will see some action at quarterback and Joshua Tihada will line up behind center in wildcat formation from time to time.

“A few positions we’re doing fine,” Rickard said. “It’s in the trenches where we lost a lot of key players from last year.”

With a roster of about 45 players, Rickard said that Joshua Tihada and Irish, along with Galoia and Sakalia, could see significant time on defense as well. The senior class, as always, is the group that will be counted on for leadership.

“What we always try to remind the kids about is: ‘Don’t try to live on the laurels of the previous senior class, you guys are the seniors now, so you folks need to take the leadership role,’ “ Rickard said. “I think we have pretty good leadership this year with, of course, Joshua, Nai, Bookland, Kai Casco. We’ve got a pretty good group of leaders.”