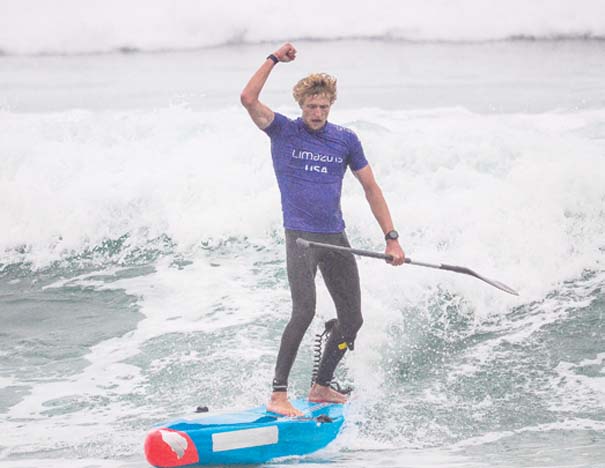 Maui’s Connor Baxter celebrates as he heads for a win in the men’s SUP race at the Pan American Games last week in Lima, Peru. -- LATINWAVE photo

In his Team USA uniform, Haiku’s Connor Baxter out-paddled his competitors to claim a historic win.

Under overcast skies and chilly temperatures, Baxter finished the three-lap, 3-mile stand-up paddleboard course in a time of 24 minutes, 18 seconds to bring home gold from the Pan American Games on Aug. 2 in Peru.

“It was a great event and I came here for one thing, and that was to get the gold medal,” Baxter said via FaceTime from Peru earlier this week. “So to come out with that goal accomplished and to bring it home back to Maui is even a greater honor.”

Since it was also the sport’s debut in the Pan Am Games, he was the first ever SUP racer to become champion at the second-largest event on the Olympic circuit. 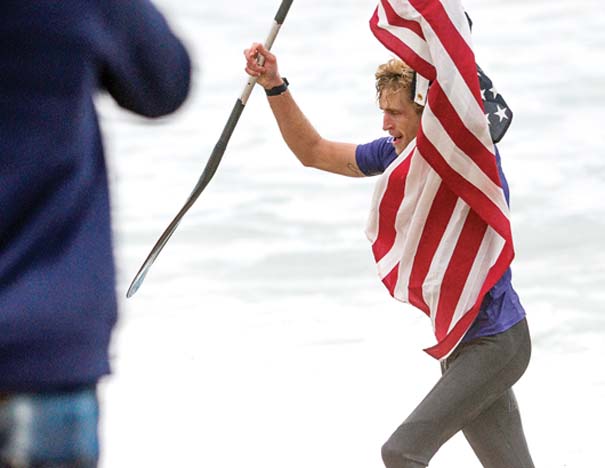 Connor Baxter carries the American flag after finishing the three-lap, 3-mile stand-up paddleboard course in a time of 24 minutes, 18 seconds to bring home gold from the Pan American Games on Aug. 2 in Peru. -- LATINWAVE photo

“Winning was a shocker, but at the end of the day, this is my 11th year competitively racing around the world doing all sorts of competition, so the work has definitely been put in,” he said. “To come out on top is a bit of a surprise in a lot of ways just because it’s the first time that surfing and stand-up has been involved with Pan American Games.”

Baxter spent over a week in Peru, preparing for race day and joining in on the Pan Am traditions.

“The opening ceremony was such an amazing experience,” he said. “For me, probably the closest I’ve ever gotten to feel like I’m in an Olympic parade. To come down with Team America, just over 600 athletes, plus with all the other athletes, so you have thousands of athletes coming down through the huge stadium and the bleachers were filled.”

Surfing will make its debut as an Olympic sport in the 2020 Games in Tokyo. The International Surfing Association is still considering stand-up.

“Depending on how it goes here, between views and content, and how much of a spectacle (stand-up) was, it could be a very good pitch for our sport for 2024 Paris,” he said.

From a water start, racers paddled out and away from shore, turned parallel to the shoreline, paddled through the shorebreak and then back out again for two more one-mile loops.

Neither Baxter, Delgado nor Martins caught a wave on the first lap, causing them to share the lead.

“It wasn’t until the second lap where I made my move and got a little lucky, read the water as well, and found a little wave and was able to sneak onto the wave by myself,” he said. “That kind of created a gap between second and third place.”

On his 14-foot Starboard Allstar, Baxter extended and maintained his lead through the final loop, finishing over a minute ahead of Delgado.

“It wasn’t until that last left turn where it was starting to soak in and feel that victory,” he said. “We still had to go through some gnarly shorebreaks, so there was still opportunity to lose it and still opportunity for second place to catch up, so I kept the game face on and was able to navigate through the shorebreak untouched and hit the beach with the hair dry and run up in first place.”

Baxter said he owes his win to his Maui roots and having the opportunity to race on various courses.

While home, he typically trains at Maliko Bay and Kahului Harbor, mapping downwind routes, as well as cross trains by windsurfing and surfing at Hookipa.

“Since it was a surf race style, in and out through the surf, being from Hawaii was definitely an advantage,” he said. “Traveling around the world, being thrown on flat water, ocean, waves, no waves. Being thrown on a lake … definitely prepared me for this event, for sure.”

The 24-year-old has been competing in windsurfing and surfing events since the age of 8. At 16, Baxter started focusing more on stand-up paddleboarding for its special environment.

“For me, it’s the community and everybody involved,” he said of the sport. “From the competitors to the sponsors to the companies. … With stand-up paddleboarding, you cross the finish line and you’re just friends–before, during, after. You talk during the race, working together, and it’s a pretty tight community, and you get to travel all around the world. So, it’s pretty amazing to make those connections and make those friends.”

While traveling the world, Baxter has earned a few world championship titles, as well as been named SUP Athlete of the Year and Male Paddler of the Year five times. Baxter has also won the SUP Maui-2-Molokai World Cup eight times.

Up next, Baxter continues the stand-up paddleboard season on the world tour, competing at events in California, New York, Japan, China, and finally, Paris.