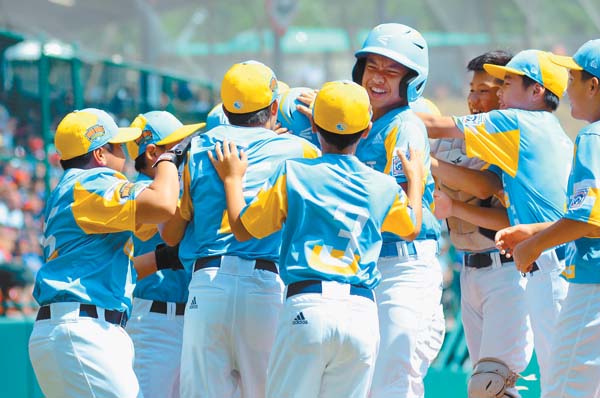 Central East Maui players celebrate a run during their game against Elizabeth, N.J., on Sunday at the Little League World Series. Maui led 6-0 in the fifth inning when the game was suspended by weather. BRETT R. CROSSLEY photos

WILLIAMSPORT, Pa. — Central East Maui was rolling against one of the favored teams in the tournament as it took on Elizabeth, N.J., of the Mid-Atlantic in the final game of Sunday’s lineup at the Little League World Series.

Everything was going Maui’s way as it scored runs in each of the first three innings to take a 6-0 lead.

Logan Kuloloia was in the middle of an outstanding performance on the mound when lightning streaked across the sky to force a delay. From there, the weather continued to dip as rain moved in and postponed the game in the top of the fifth inning until 7 a.m. HST today.

Kuloloia was relieved by Isaac Imamura in the fourth inning.

A victory by CEM would move the Hawaii state and West Region champions within three wins of the world championship. 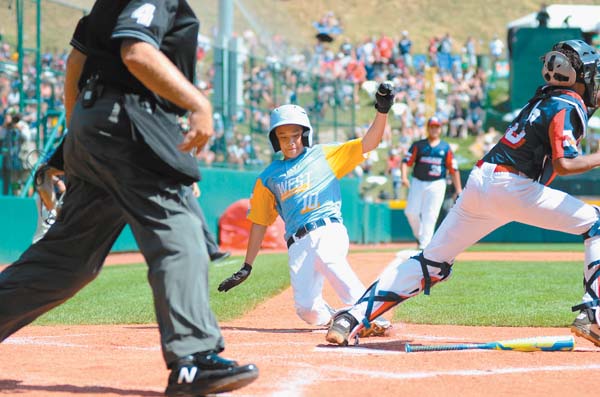 CEM scored one run in the first inning, two in the second and three more in the third to support the shutout pitching of Kuloloia (3 1/3 innings) and Imamura (1 inning).

Nicholas Nashiwa smacked a three-run double in the bottom of the third inning to push Maui’s lead to 6-0. Jaren Pascual hit a home run in the first to give Maui a 1-0 lead.

If Maui holds on to the lead in its current game, it will play on Wednesday against Southeast champion South Riding, Va., in a game slated to be televised on ESPN at 1:30 p.m. HST.

Pascual, who had a single and scored a run in the team’s opening game, took the crowd out of Sunday’s game with his solo shot to center field.

A throwing error in the second inning scored two runs to give Maui a 3-0 lead. 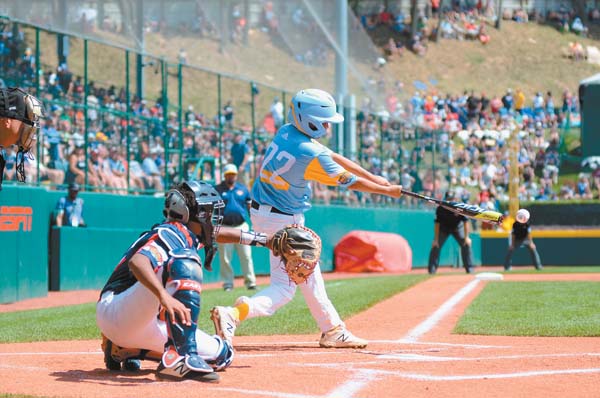 One player who has gained a following even before the Series started was the Mid-Atlantic’s Yadi Mateo, who helped his team qualify with a win over New York in the Mid-Atlantic championship game. Mateo stands out because he’s easily the biggest player at the Series. He stands 5-10 and weighs over 200 pounds.

In the first, after two strikeouts by Kuloloia opened the game, Mateo drove a single through the infield, but was stranded when a fly out to shortstop ended the inning.

In the third, the Mid-Atlantic got a runner on base with a hit batter, and Mateo hit two-out single, but Kuloloia got the next batter to fly out to end the threat.

The game will resume today with one out and a runner on first base in the top of the fifth inning.

King Kekaulike’s Kali Kuhaulua picks up a first down during the first quarter Saturday against Kwansei Gakuin.

Lana Calibuso-Kwee of Wailuku hits a shot during her quarterfinal win over Katrina Huang on Saturday.

The Rams take on the Cowboys during the second half of a preseason game Saturday at Aloha Stadium. AP photo

Menehune champion Zolten Poulsen of Lahaina steps to the nose.

Central East Maui players celebrate a run during their game against Elizabeth, N.J., on Sunday at the Little League World Series. Maui led 6-0 in the fifth inning when the game was suspended by weather. BRETT R. CROSSLEY photos

Kanoelani Davis, owner of PoMahina Designs, models one of her creations. Next month, Davis’ fashion line will debut on the runway at London Pacific Fashion Week, part of the prestigious London Fashion Week event. She will be the first designer from Hawaii “to fully represent a Hawaiian collection in London,” according to organizers. Photos courtesy PoMahina Designs

Kanoelani Davis holds up the “Ku Kia‘i Mauna” symbol in support of the movement to stop the Thirty Meter Telescope on Mauna Kea while at the inaugural Fashion Hawaiian Style event in Washington, D.C., in July.

Swimwear from PoMahina Designs’ fashion line is pictured here. Owner Kanoelani Davis said her designs are inspired by the elements, like rain, clouds and wind.