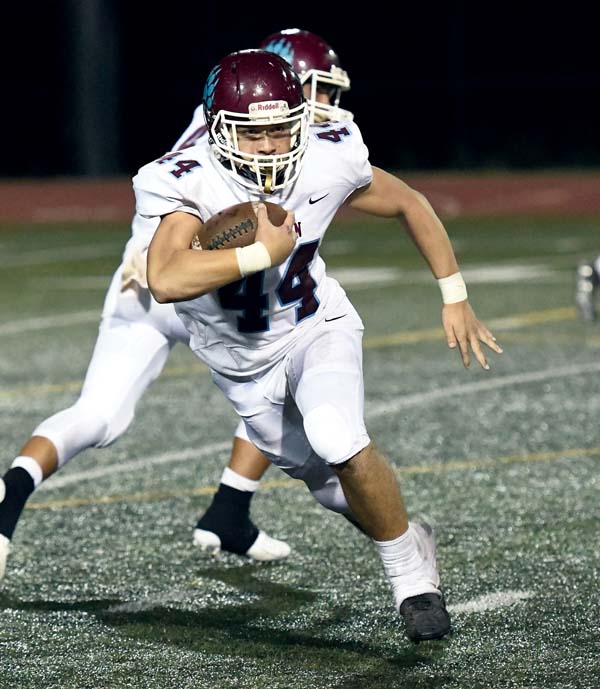 Baldwin High School running back Ezra Laga carries the ball in the second quarter of the Bears’ 27-23 victory over Kamehameha Maui on Friday night at Kanaiaupuni Stadium. -- The Maui News / MATTHEW THAYER photo

PUKALANI — Josiah Sniffen saw an opportunity for his Baldwin

High School football team to win sitting right in front of him in the form of a loose football on the Kanaiaupuni Stadium turf on Friday night.

The senior linebacker scooped up a dropped punt snap and rumbled 30 yards to paydirt with 1 minute, 17 seconds left to play to give Baldwin a 27-23 victory over Kamehameha Maui that appeared next to impossible moments earlier.

“I just picked it up and looked straight to the touchdown,” Sniffen said. “I was hoping I would get in.”

The Bears charged back from a 21-7 deficit late in the third quarter to tie the score before Ezra Laga was caught in the end zone for a safety with 3:09 to play to give Kamehameha Maui a 23-21 lead and the ball back on the free kick. 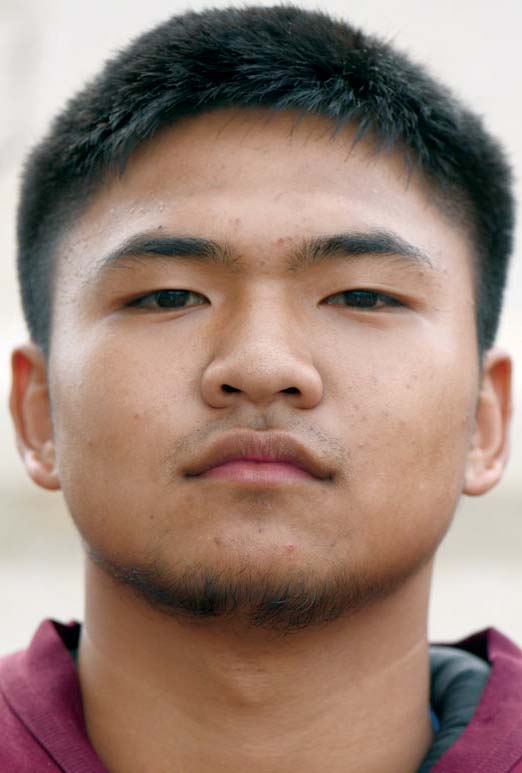 The Warriors ran the clock down before lining up to punt, but the play went awry and Sniffen scooped and scored.

“When I saw it on the ground, I thought, like, this is an opportunity to score or to get the ball close to the touchdown, so our offense could score,” Sniffen said. “This win, it leads on to our next game coming up with Lahaina. We can use it as motivation to go into that week.”

All Baldwin coach Pohai Lee could do after the wild finish was smile.

“Like I said before it never ends in this league,” Lee said. “It’s wild. Give Kamehameha credit, I mean they are good. They are really good and they are only going to get better and better. It’s tough, tough break how they lost. Heck, it would have been a tough break how we would have lost.

“No one wants to see it end that way, but it was a tough, well-fought game.” 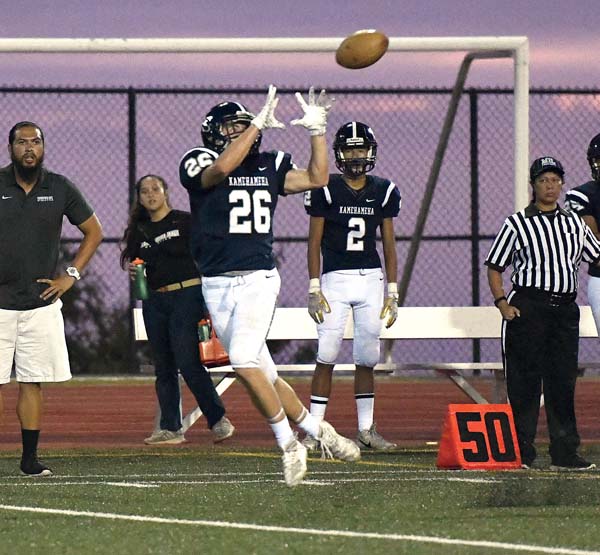 For a team coming off a 3-7 MIL season that lost 52-0 last week to California power Edison, this win was huge for the Bears.

“That’s the key, was to keep playing, move on to the next and sure enough things swung our way,” Lee said. “It’s a huge momentum starter for us and it’s definitely what we needed after last year.”

Kamehameha Maui had a 37-yard touchdown pass from Alec Tolentino to Makani Smith-Kemfort called back early in the third quarter on an illegal-man-downfield penalty when they were leading by 7.

When they got the ball back on their next possession, the Warriors went 80 yards in six plays, scoring when Smith-Kemfort grabbed a 6-yard pass from from Tolentino to push their lead to 21-7 with 5 minutes, 13 seconds left in the third quarter.

Baldwin responded right away, going 68 yards in eight plays — Laga capped the drive with a 30-yard touchdown run up the middle to make it 21-14 with 1:07 left in the third. 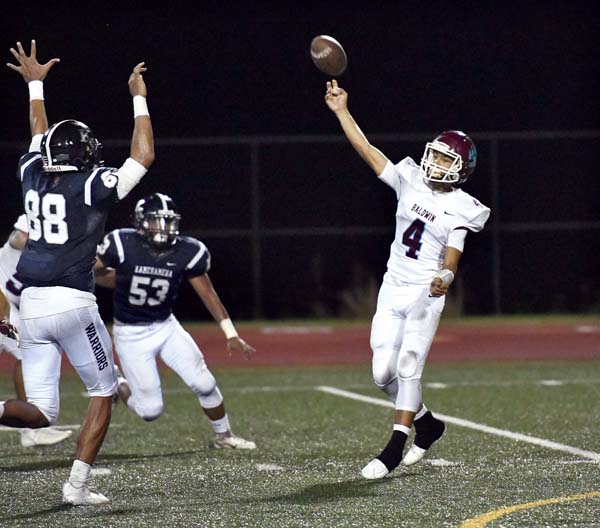 The Bears tied the game after taking advantage of a short punt and a 10-yard penalty that allowed their drive two possessions later to start on the Kamehameha 31.

Baldwin needed just four plays to score, capping the drive on a 9-yard scoring pass from Laakea Asuega-Stark to Mafatini Mafatini III with 7:33 to play.

A 51-yard punt pinned the Bears on their own 3-yard line before Laga was caught in the end zone two plays later for the safety.

“You have got to continue to play,” Kamehameha Maui coach Ulima Afoa said. “We had two big plays given up on defense and unfortunately those are the ones that cost us. But, you know, we’ve got a new team and we’re trying to figure out how well they can bounce back. This is just step one.”

The Warriors took a 14-7 lead into the locker rooms at halftime. 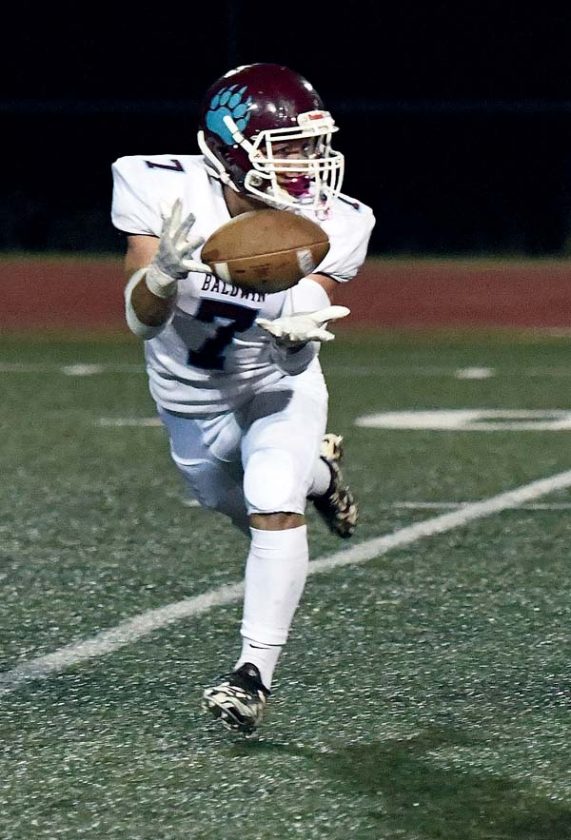 Smith-Kemfort got Kamehameha on the board when he broke free over the middle for a 57-yard touchdown pass from Tolentino on the first drive of the game.

The kick failed, leaving the Warriors ahead 6-0 with 9 minutes, 43 seconds left in the first quarter.

Baldwin’s defense forced a three-and-out possession on the next Warriors’ drive, and the Bears bounced back quickly to take a 7-6 lead on their own long pass over the middle. Asuega-Stark hit Danelle Daniels for an 85-yard score, and Isaiah Souza made the kick to give Baldwin a 7-6 lead with 4:26 left in the first quarter.

The game evolved into a defensive duel after that, but the Warriors took a 14-7 lead when Kapena Gushiken broke free down the left sideline for a 75-yard punt return with 3:03 left in the first half.

Gushiken had 157 yards on five returns in the first half, including a 31-yard interception return that started at the goal line late in the half.