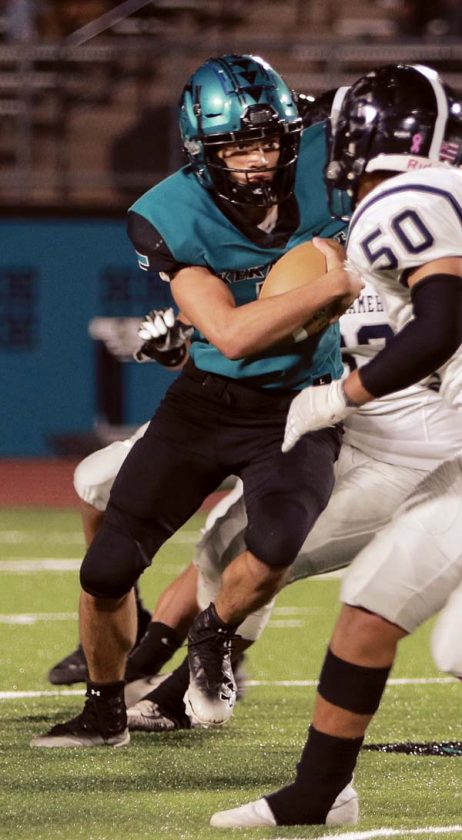 Trey Hunter and the King Kekaulike High School football team open the season with a game against McKinley at Farrington on Saturday. Hunter, who broke the state record with a 342-yard receiving night last season in a 41-20 loss to Maui High, will line up at slot and safety this season, coach Tyson Valle says. The Maui News file photo

The high school football season starts Saturday with a trio of intriguing games for the Maui Interscholastic League.

Molokai, the four-time defending MIL eight-player champs, will play its first 11-man game in more than half a century at Nanakuli.

And King Kekaulike will be seeking its first win since Sept. 5, 2014 when Na Alii take on McKinley at Farrington’s Skippa Diaz Stadium. Saturday night’s game will be on the one-year anniversary of Kekaulike’s 31-14 loss to McKinley last season that is one of 41 straight defeats.

“Oh man, I think we’re all excited,” King Kekaulike head coach Tyson Valle said. “Anxious, you know, to see what our offseason has brought us this year. We definitely had a very impactful offseason, so this Saturday, these guys are ready. We actually want the game earlier, we’re super excited to get out there and get this thing rolling.” 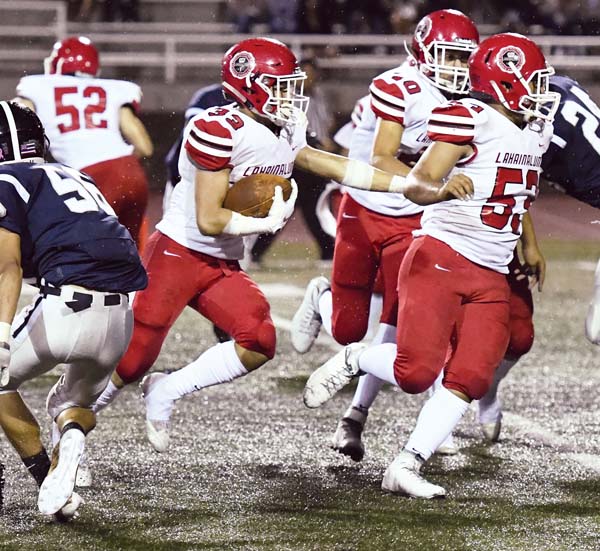 Joshua Tihada and the Lahaina­luna Lunas begin the season Saturday with a game against Damien at Sue Cooley Stadium. The Maui News / MATTHEW THAYER photo

The goal on Saturday is simple: Win.

“A win is going to be huge for us, that’s why we’re putting in all the work,” Valle said. “It’s what the foundation was built for — obviously we’re at a point now where we’re ready to win. … We got close last year, so these guys are almost thirsty for this win.”

Valle unveiled a varsity roster that includes 19 seniors amongst its 42 players, the highest amount of seniors in a single season since Valle graduated from the school in 2001, he said.

“You just can feel the difference in the leadership,” Valle said. “That was a thing that was missing from our program for a long time. … The team definitely got smarter in football — bigger, stronger, faster.”

Franco Melgar-Martich has won the battle to start at quarterback and his top target will be Trey Hunter, who broke the state record with a 342-yard receiving night last season in a 41-20 loss to Maui High.

“Trey will line up at slot and safety, so he will be playing both sides of the ball for us,” Valle said. “We really wanted to keep him one-dimensional, but at this point in his senior year, the kid wants to play, he wants to be on the field. You know, put our best talent out there on the field.”

Valle pointed to the defensive line as a point of strength for Na Alii.

“I think this year you’re going to see a very dynamic force on the defensive side of the ball,” Valle said. “I think our defense is going to be very aggressive this year and it starts with our D-line.”

Brothers Junior Baschleben Finau and Maika Finau will bookend the defensive end spots, while Isaac Akinaka and Pokai Kanaele will hold down the middle spots.

Molokai will start Kaimana Nakayama, the MIL D-II baseball Player of the Year, at quarterback and strong safety. Nalima Puaa-Aki will start at running back and cornerback. Kolee Pedro-Tabilangan and Nate Rapanot will also help lead a 48-player roster.

The Farmers have had two proposed 11-man home games wiped when teams pulled out of commitments to play, but they are ready to roll on the road. Next week, they will travel to take on Kamehameha Maui at Kanaiaupuni Stadium.

While the Farmers will play their regular season in the eight-player ranks, it is clear they are heading toward the 11-player game in the near future.

“This is the chance to step out of our comfort zone with something that’s never been done, or hasn’t been done in 50-plus years,” Molokai coach Mike Kahale said. “We’ll see, we’ll see what happens. It’s kind of wide open for us. We’re going to play a game, we tackle and block the same way, we just have to make some adjustments scheme-wise. … We’re hoping to just compete well. Let’s have the expectation that we compete on every single play and have some fun as well.”

As usual, the Lunas will rely on their depth.

“We’re trying to utilize the talents of as many players as we can with different packages and formations,” new co-head coach Dean Rickard said. “You’re going to see that, it’s going to continue.”

They have a roster of about 45 players, down from 56 last year. Rickard, who has taken over as co-head coach and offensive coordinator for Garret Tihada, is looking to share the football with as many players as possible, which is nothing new for Lahainaluna.

“The thing about this year is we don’t have the numbers that we used to, so that is kind of a concern for us,” Rickard said. “I mean, we have decent athletes, no doubt. We’ve got a lot of potential to do a lot of good things, but because of the lack of depth we may see more two-way players than we would like to see.

“Then, of course, that comes with a lot of concerns: Are we properly conditioned? How will that play in to being physically fatigued, mentally fatigued? So those are some things that we are going to have to deal with that we never had to deal with before.”