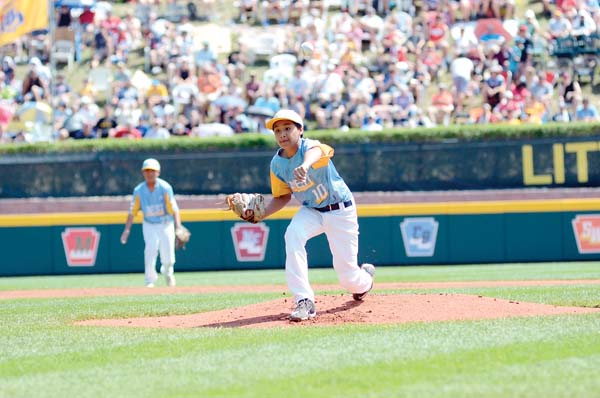 WILLIAMSPORT, Pa. — Pitching is always at a premium at the Little League World Series. Each team is limited to strict rules that determine eligibility day to day throughout the tournament.

For Central East Maui coach Brad Lung, the decisions to limit his pitchers is just part of the deal. His focus is on teaching his players the right way to throw.

CEM will face Southeast champion South Riding, Va., today to determine the first representative in the U.S. championship game Saturday. The Virginia pitchers have been just as good as Central East Maui, if not better — the group has thrown two no-hitters in their two Series games so far.

“We’re going to tell them it’s just business as usual,” Lung said of his advice to his hitters. “Just make solid contact when you’re at the plate. That’s what we tell them all the time.” 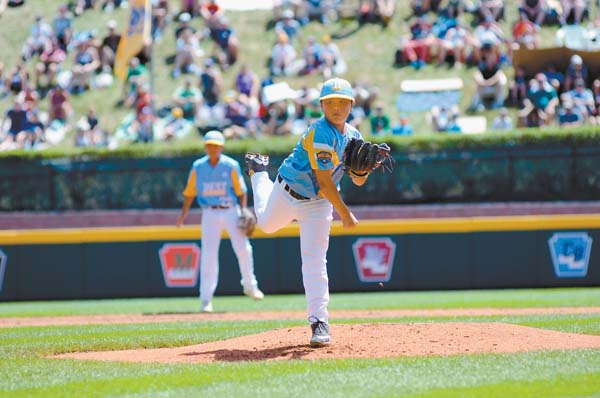 Isaac Imamura of Central East Maui follows through on a pitch Monday.

The West champions have deployed solid pitching throughout its two victories at the Series, and all the pitchers have specialty pitches that have helped navigate them against the top Little League teams in the country.

In Maui’s first game in Williamsport on Friday, Jaren Pascual kept Southwest champion River Ridge, La., at bay with his off-speed stuff, posting a complete game in a 5-2 victory against one of the more potent lineups at the Series. On Sunday and Monday, Logan Kuloloia and Isaac Imamura combined on a 6-0 shutout of Mid-Atlantic champion Elizabeth, N.J. Again, off-speed pitching was key.

“For Logan it’s the cutter and for Isaac it’s the curve,” Lung said. “Branden Arakawa has done an outstanding job with our pitchers keeping the batters in the box off-balance. He has them changing it up and hitting their spots inside and outside. Especially the specialty pitches are working for them now.”

The biggest moment of the game Monday afternoon was when Imamura, who entered in the fourth inning Sunday before the game was suspended due to inclement weather, struck out the Mid-Atlantic’s best hitter in Yadi Mateo. Imamura fell behind in the count early, but came back with a high, inside fastball and two curveballs to get the giant hitter for the second out of the inning.

“We stress on teaching the kids how to throw it the right way,” Lung said. “We don’t throw it as much, especially during the regular season, but this is the end of the road and we are trying our best to keep it going.”

Since arriving in Williamsport, a common thread has followed the Central East Maui team: its focus and commitment to playing its best.

The weather postponement forced the kids to wait an extra day to finish off the Mid-Atlantic. When they took the field to complete the final two innings Monday afternoon, it seemed like they didn’t miss a beat. That was even with the kids getting to experience the Little League Classic at Bowman Field between the Chicago Cubs and Pittsburgh Pirates on Sunday night.

“These guys don’t have a break,” Lung said after the team’s win Monday. “We practice this afternoon to get ready. Like I told people before, this is not a vacation. We are here for business and we want to do well and represent the whole island state of Hawaii very well.”