Sabers itching to get season started 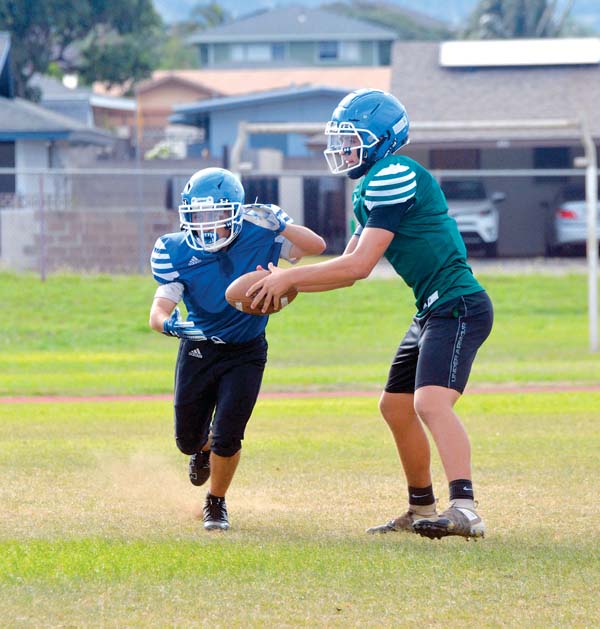 Maui High School quarterback Brex Delray hands off to running back Keoki Kong during a practice Monday at the Sabers’ field in Kahului. The Maui News / ROBERT COLLIAS photos

KAHULUI — The Maui High School football team will be the last in the state to take the field for a game when the Sabers travel to the Garden Isle to play Kauai High on Saturday.

“This team can be very good, it’s a long wait, so it’s kids gelling together and they’re getting antsy,” Maui High head coach Rodney Figueroa said last week at practice. “They want to play someone. I haven’t had a team where we started July 15th and we’re not going to play until August 24th — the (Maui Interscholastic League) season starts August 30th.”

Senior quarterback Brex Delray, record-setting running back Naia Nakamoto, Edwin Marcos and Richard Batze on the offensive line, and wide receiver Christian Lee return on the offensive side of the ball.

“Brex has stepped up this year, it’s his senior year, he’s been up here three years in the varsity program, so he knows why I keep pushing him,” Figueroa said. “It’s his time to lead. He has stepped up.”

Delray is on his third offensive coordinator in Donald Mahoe, who moves up from being the junior varsity head coach. Delray finished fourth on the MIL passing yardage chart last season, completing 39 of 71 throws for four touchdowns and six interceptions. 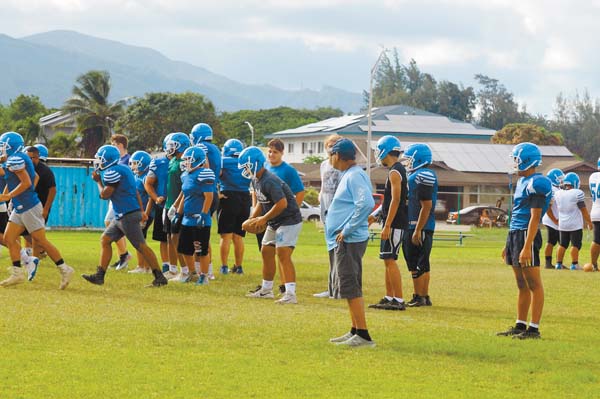 “We can be good, we have a new style of offense coming up this year with our new offensive coordinator, Coach Mahoe,” Delray said. “He’s installed a new (spread) offense and if we execute it should do well against all the other defenses.”

Delray is backed up by Toa Afemui, one of only four sophomores on the varsity roster. Last season’s backup QB, Taelen Bates, is now concentrating on baseball.

“(Delray) really loves what Donald is putting in,” Figueroa said. “They’re working together.”

Figueroa is excited to see what Nakamoto can do as a senior. The 5-foot-9, 210-pound running back set the MIL single-season rushing record last year with 1,353 yards to go along with a league-best 16 touchdowns.

Lee caught 15 passes for 130 yards and a touchdown last season.

“He looks in good shape, he has to be the leader of that group,” Figueroa said. “And that group has been coming along. I’m really impressed with the younger guys.”

“He’s been working hard in that weight room,” Figueroa said. “He has to be the leader on that line and he’s kind of stepping up in that position.”

“He has really worked offseason, through the summer and he’s bigger, stronger, way faster this year,” Figueroa said. “He has taken the lead, too, helping out the young kids coming up.”

The defense is led by Sione Lolohea, a 6-6, 250-pound senior defensive end who has three NCAA Division I football scholarship offers, although he is also a rugby standout who played in an international rugby tournament this summer.

“He came back from rugby and he is in shape,” Figueroa said. “He has lost some weight, is in shape. I’m watching him run and I’m just, like, ‘Wow.’ He has picked up speed and he has gotten faster.”

Lolohea smiled when asked if he might sneak on to the offensive side of the ball to play tight end.

“Yeah, I’m very excited for that, too, just to give it a try,” Lolohea said. “I should be able to catch the ball, just like rugby.”

Lolohea’s main spot for the Sabers is at defensive end. He has football offers from BYU, Fresno State and Hawaii.

“I feel like our defense can be really good,” Lolohea said. “Especially our D-line by executing and passing the O-linemen to get to the quarterback. Even our linebackers, knowing how they can read off us. And our defensive backs, I have a lot of trust in our DBs and safeties.”

Lolohea has been a big part of both of the last two MIL Division I champion Maui High teams that lost state tournament games to Hilo. The Sabers are 0-4 all-time in the state tournament.

“It’s motivating us a lot, knowing that the last two teams couldn’t do it,” Lolohea said. “Also, everyone knows that Maui High never won. I’m pretty sure everyone on this team is motivated to be the first team to win a Division I state title. That’s the goal.”