Widell working his way back

After sitting out 2018 due to illness, King Kekaulike grad breaks through with first win with E-Twins 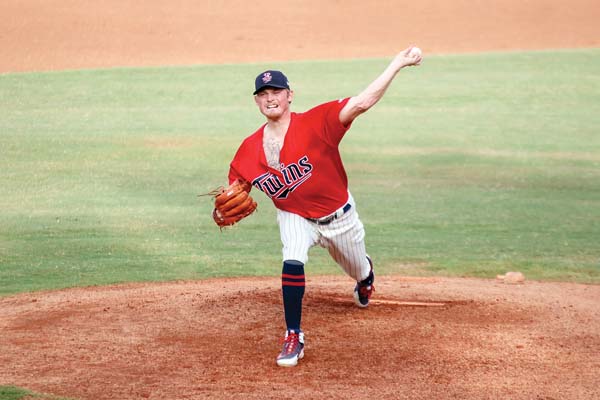 King Kekaulike High School graduate Ryley Widell is 1-5 with an ERA of 7.09 in eight starts this season for the Elizabethton (Tenn.) Twins as he works his way back from missing the 2018 season with mononucleosis. Elizabethton Twins / Kassi Butcher photos

Ryley Widell is not where he wants to be on his professional baseball journey, but he is getting there.

Widell, a 2015 graduate of King Kekaulike High School, is working his way back from missing the 2018 season with mononucleosis.

The 6-foot-4, 215-pound left-handed pitcher won for the first time as a professional on July 28 and his Elizabethton (Tenn.) Twins are in playoff position, currently sitting second in the West Division of the Rookie-level Appalachian League.

“I’m feeling pretty good, unfortunately I missed last year due to illness,” Widell said via phone after the E-Twins beat Kingsport 6-3 on Wednesday night. “It’s just good to be back playing baseball.”

His repertoire of fastball, curveball, change-up is developing as he plays his first full season of professional baseball. He played the 2016 season for Washington State University and then moved to Central Arizona College in 2017. 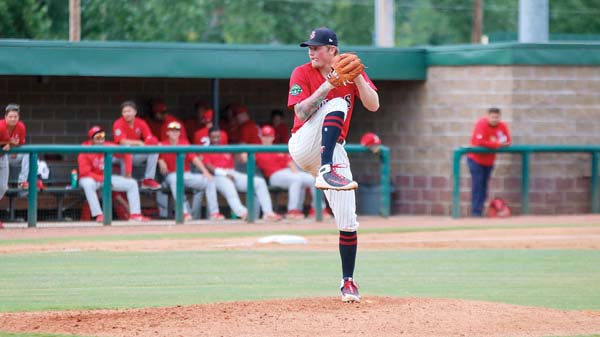 Ryley Widell got his first pro win on July 28, as his E-Twins team beat Bristol 4-3.

After committing to play at North Carolina as a college junior, he was selected in the seventh round of the 2017 Major League Baseball draft by the Twins. He played an abbreviated season in 2017 for the E-Twins, appearing in eight games, going 0-2 with a 2.43 ERA, 41 strikeouts and 20 walks in 29 2/3 innings.

Elizabethton pitching coach Richard Salazar said Widell is doing well as he builds his arm strength back to what it can be. Salazar said the velocity on Widell’s fastball is currently “86 to 90” mph, but he sees mid-90s potential in the lanky lefty.

“He lost a year with mono and this is the first full year where he has been throwing, so he has been up and down, but he got his first professional win the other day,” Salazar said. “He’s able to go now, like, five innings, throw strikes more consistently, so he’s better and we feel like we’re looking at this first year as a process.”

Salazar has a simple message for Widell, who will start on the mound on Friday in a crucial game against Johnson City, which leads the E-Twins by two games in the division.

“He’s getting along really well late in the season and the most important part of it now is ‘it’s not how you start, it’s how you finish,’ “ Salazar said. “And right now Ryley’s doing a great job.”

Elizabethton is currently 1 1/2 games in front of third-place Bristol with 20 games to play in the regular season — the top two teams in each division make the Appalachian League playoffs.

Widell celebrated an Appalachian League championship with the E-Twins in 2017 and was named a possible breakout prospect for the Twins organization before missing last season.

His victory came against Bristol when he allowed three earned runs and six hits in 5 2/3 innings, but perhaps the more important numbers that day were four strikeouts and no walks.

“In 2017 I was kind of on an innings limit, so I couldn’t even get past five (innings), so I couldn’t get any wins, but technically could take losses,” Widell said. “It kind of took a little while when I got here, but it was nice to finally get that win under my belt.”

He can’t wait to take his turn on Friday against the Cardinals.

“That should be exciting,” he said. “It’s a small town, but they’re all about the Twins. We’re right next to Johnson City and they have a nice little facility over there. It’s a big rivalry and it’s a lot of fun.”

He will spend about a month at the Twins baseball academy in Fort Myers, Fla., after the E-Twins’ season.

“I really didn’t throw for about a year and a half, so trying to get back into baseball it’s kind of been a slow pace right now,” Widell said. “It’s starting to go better, but I’m trying to find ways to be more consistent in my playing and pitching. I definitely need to work on it in the offseason.”

The bus rides in the Appalachian League range from 40 minutes to five hours, but Widell is OK with all of that.

“The longest one we have is to Danville, which is in Virginia, but we only do that one once a year,” he said. “The travel isn’t too bad.”

The bottom line is he is adapting to his situation as he grows stronger — he’s gained about 35 pounds and added an inch of height since high school — and gets his velocity back.

“I’m learning how to pitch when I don’t have my best stuff,” he said. “My stuff hasn’t been the greatest right now, but I feel like I’ve been able to battle well and make the most of it. Definitely, if you look at my stats, I’m not doing the best, but I definitely feel like it’s good for me to find where I’m at, see what I need to work on, see what I need to improve on.”

He knows the regular Ryley Widell is just around the corner.

“Yeah, definitely,” he said. “I’m working to get stronger, so like every outing I’m pitching a lot better, I go over things with my pitching coach. We’re really fortunate to have all this technology and stuff to really look over exactly what’s going on, attack the issues with everything.

“Hopefully I finish the year strong and I go into the next season, just see how things go when I get back into the swing of things — get my arm stronger throwing-wise, get that velo up, and land my pitches.”