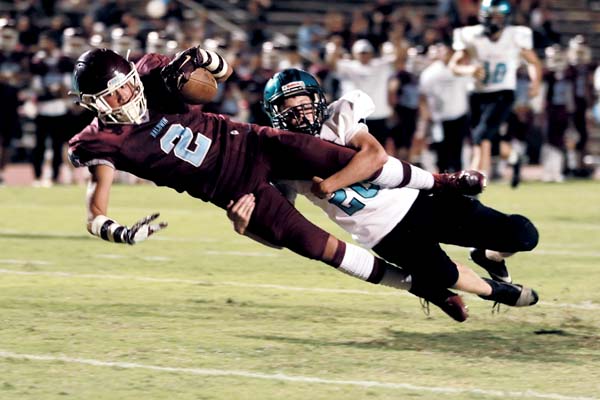 Baldwin High School’s Kapena Kamai dives for a touchdown while being tackled by King Kekaulike’s Thor Ventura in the second quarter of the Bears’ 24-21 win over Na Alii on Friday night at War Memorial Stadium. The Maui News photos

WAILUKU — Kapena Kamai was not going to let his team lose.

The Baldwin High School senior wide receiver had the game of his life, catching six passes for 122 yards and two touchdowns, including the game winner with 2 minutes, 55 seconds to play in a dramatic 24-21 win over King Kekaulike on Friday night at War Memorial Stadium.

It was even more special considering it was the Bears’ homecoming night in front of a packed stadium. There was little doubt in the crowd that junior quarterback Laakea Asuega-Stark was going to his playmaker with the game on the line.

“King K is a very good team, but not tonight,” Kamai said as the alma mater was sung in front of the jubilant Baldwin crowd and band. “We just stuck in there and Laa had a beautiful throw. It was just, man… Definitely this is my best game — as a senior. I love these guys, all of Baldwin.” 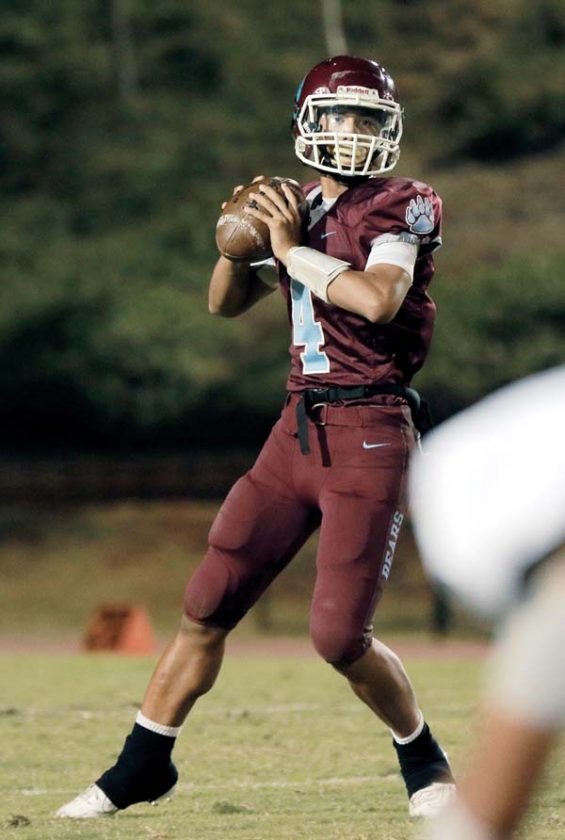 The game turned electric as the fourth quarter wound down.

With the Bears clinging to a three-point lead, a handoff between Asuega-Stark and Isaiah Souza was fumbled and Helmut Baschleben Finau scooped up the loose ball and rumbled 64 yards to the end zone to give King Kekaulike a 21-17 lead with 7:06 to play.

The first play of the ensuing possession was a 50-yard completion from Asuega-Stark to Isaiah Richards that put the ball on Na Alii’s 30.

The Bears reached the King Kekaulike 8 on a 24-yard pass to Kamai, but Na Alii held on downs from there, taking the ball back with 4:38 to play Baldwin forced a fumble by Trey Hunter on third down on the ensuing possession and took over on the 19. Asuega-Stark found Kamai on the next play in the end zone to give Baldwin the lead back with 2:55 to play.

“We had a good game, that’s just football,” Kamai said. “To have it come on homecoming night, it’s very special to me.” 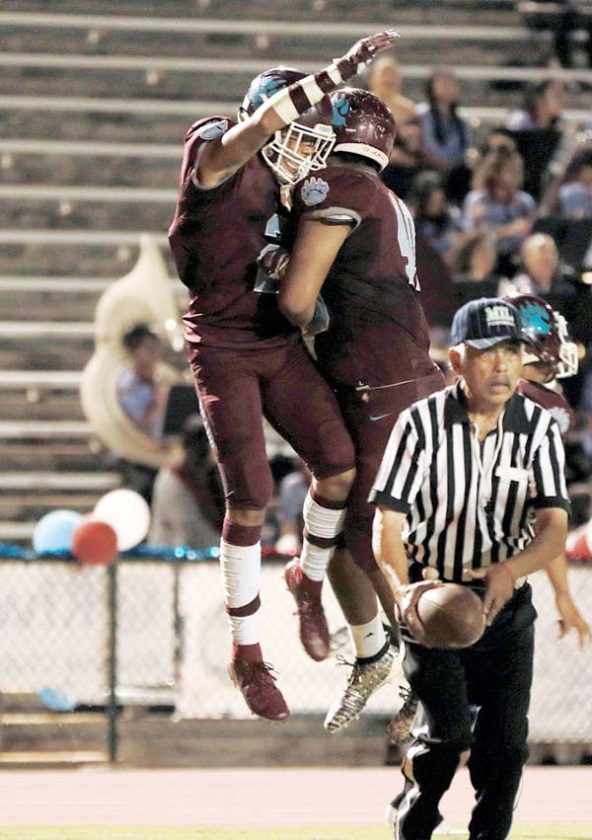 Baldwin boosted its lead to 10 points as the game evolved into a defensive battle when Souza nailed a 36-yard field goal with 29 seconds left in the third quarter.

Na Alii pulled within three points when they went 80 yards in seven plays and scored on a 9-yard run by Hunter out of wildcat formation to make it 17-14 with 9:35 to go. The big plays on the drive were a 22-yard pass from Franco Melgar Martich to Hunter and a 31-yard Melgar Martich strike to Micah Ramos that put the ball on the Baldwin 14-yard line.

The Bears took a 14-7 lead into the locker rooms at halftime.

Baldwin struck first after a huge change of momentum in the waning moments of the first quarter. With Na Alii driving and inside the Bears’ 10-yard line, Chathan Foster intercepted a Melgar Martich pass and returned it 61 yards to the King Kekaulike 34-yard line.

Asuega-Stark dove in from a yard out on fourth down 10 plays later to make it 7-0. 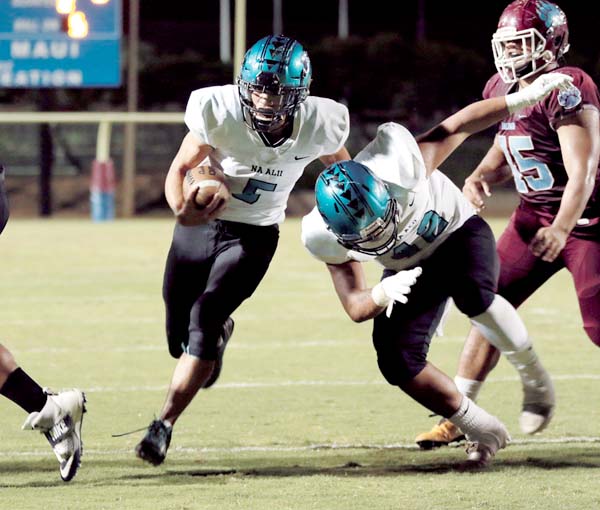 King Kekaulike’s Trey Hunter runs in for a touchdown next to blocker Kali Kuhaulua in the second quarter.

The Bears went 91 yards in seven plays the next time they had the ball, scoring on a pretty 24-yard crossing pattern from Asuega-Stark to Kamai, who stretched the ball as he was going down to get it over the goal line.

The big plays on the drive were a 41-yard pass from Asuega-Stark to Nathen Foster and a 21-yard, acrobatic grab by Richards that put the ball on the Kekaulike 14.

Na Alii closed within 14-7 at halftime on a drive that was virtually all Hunter.

Hunter ran four times for 33 yards, including the final five yards with six seconds left in the first half for the touchdown. His first two runs were for two and 11 yards for first downs out of punt formation on fourth down. He also caught a 35-yard pass between double coverage to put the ball on the Bears’ 5-yard line.

Hunter finished with 10 carries for 64 yards and caught five passes for 78 yards. 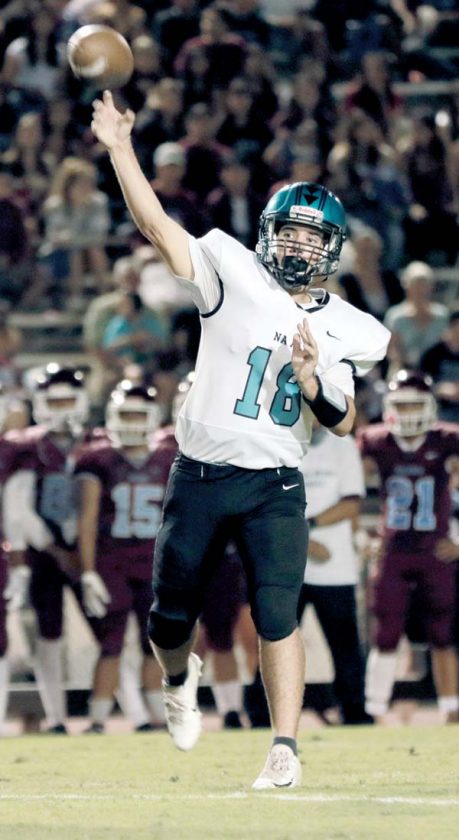 The game was another piece of evidence that this King Kekaulike team has put its 41-game losing streak coming into the season to rest.

“They’re tough, (coach) Tyson (Valle) and their staff did a great job,” Baldwin coach Pohai Lee said. “It’s no surprise to me because I’ve watched their film from the last couple years. It was close last year and this year it was a battle again.”

Lee had nothing but praise for Kamai.

“He came to play,” Lee said. “He wanted the ball and it’s nice to see a playmaker making plays.”

Valle said he was proud of his team as they now have the second round to focus on in their best season in several years.

“Our games are close and close and they keep getting closer, but tonight I’m proud of these boys,” he said. “Offense, defense, even on special teams, these guys came out to play tonight.”

End of first round