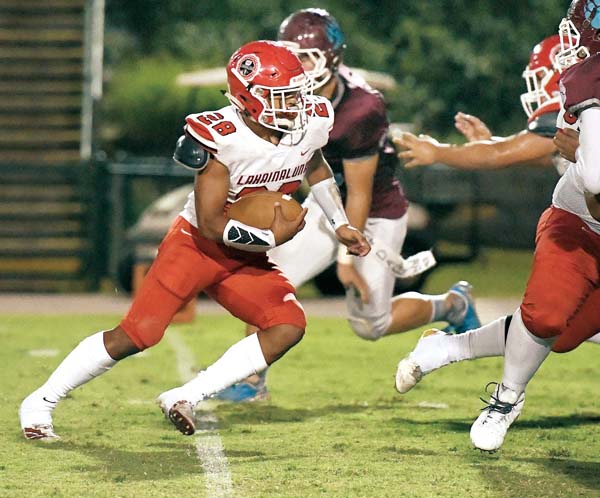 WAILUKU — The hard-hitting tradition between the two most dominant football teams in the Maui Interscholastic League returned Friday night at War Memorial Stadium.

Lahainaluna High School beat nemesis Baldwin 26-14 in a game that saw stellar defense, colossal hits on each side and electric moments on offense and defense for both teams.

In their first meeting this season on Aug. 31, the Lunas blew out the Bears 34-9.

“We knew coming in that we weren’t going to be facing the same Baldwin team that we faced in the first round,” Lahainaluna co-head coach Dean Rickard said. “They did what they needed to do, they stopped us in the certain scheme that we came out with — they did a great job.” 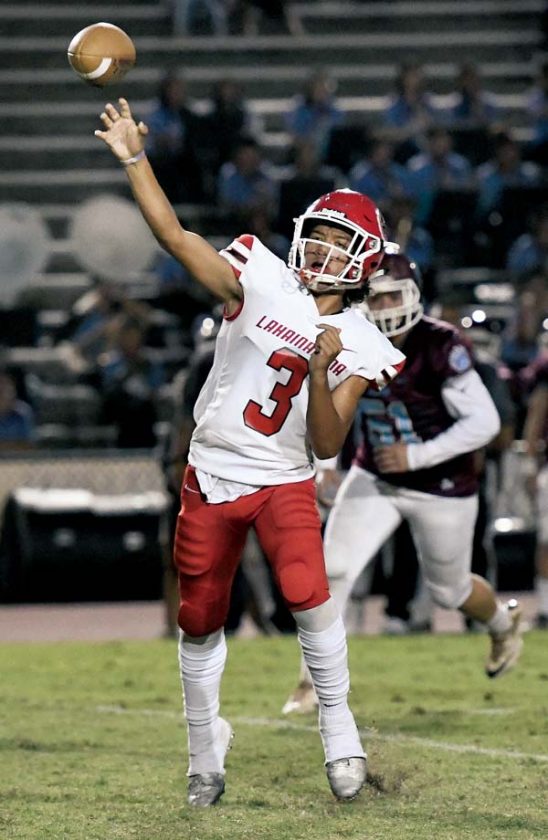 Both coaches said they need to go back to work as the season turns to the home stretch. The Bears will take their bye next week trying to trim down the 14 penalties they had for 119 yards on Friday.

“It was a physical game,” Baldwin coach Pohai Lee said. “We still made too many mistakes. To be a good team, we have to eliminate those. It’s still a work in progress for us.”

The second half dissolved into a defensive battle until Lahainaluna’s Kaihulali Casco took a snap in wildcat formation and broke through the line and went 67 yards untouched for a touchdown to make it 26-7 with 6 minutes, 39 seconds to play.

The teams had traded three interceptions in the first 18 minutes of the second half — by Baldwin’s Kapena Kamai and Akuila Koloamatangi, while the Lunas got one from Casco.

Kamai caught a 21-yard touchdown pass for the Bears from Laakea Asuega-Stark with 3:34 to play to account for the final score. It was the eighth catch of the night for Kamai, who had 96 receiving yards. 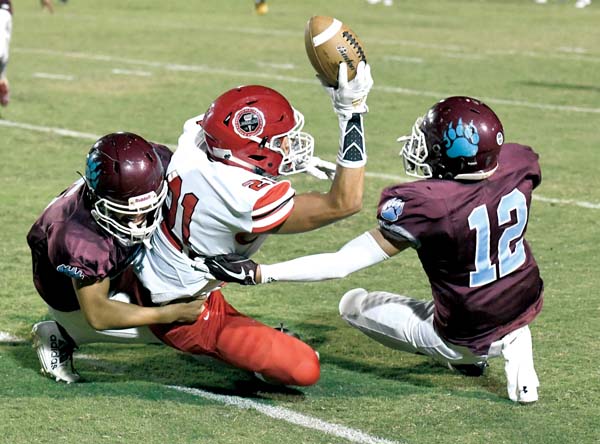 Lahainaluna’s Kaihulali Casco controls a first-quarter reception with one hand as he is brought down by Baldwin’s Bronson Adric (left) and Tommy Collier. -- The Maui News / MATTHEW THAYER photo

The Bears’ onside kick try was unsuccessful with 3:34 to play, and the Lunas ran the clock down to 1:39 before punting to the Bears.

Lahainaluna took advantage of solid field position early in the game to grab the lead. The Lunas started on the Baldwin 48- and 39-yard lines on their first two drives of the game, but missed a field goal and fumbled away those chances.

The Lunas’ third drive started from their own 47-yard line and they traversed the 53 yards in nine plays, scoring on fourth-and-goal on a 1-yard dive by Esekielu Storer. Storer was 3-for-5 passing on the drive for 47 yards.

After an interception by Brian Sandoval set the Lunas up on the Baldwin 41, the Lunas pushed the lead to 14-0 on a 1-yard dive by Joshua Tihada after a seven-play drive that was helped by a 15-yard penalty on the Bears.

Lahainaluna pushed the lead to 20-0 with 6:05 left in the first half on a 3-yard run by Tihada that finished a six-play, 44-yard drive. 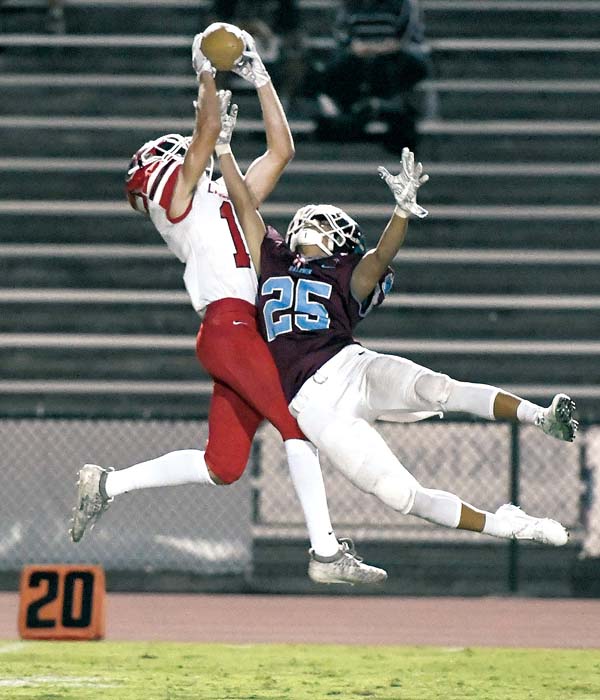 The Lunas’ Kai Bookland catches a pass as the Bears’ Jedidiah Nerpio defends in the first quarter. -- The Maui News / MATTHEW THAYER photo

The Bears pulled within 13 on a hard-fought, 8-yard run by Asuega-Stark with 11 seconds left in the half. The scoring play capped a 13-play, 70-yard drive that included a pair of fourth-down conversions — one came on a 5-yard penalty on the Lunas on fourth-and-4 and the other was a 4-yard run by Isaiah Souza on fourth-and-1 that moved the ball to the Lunas’ 18-yard line.

Tihada came in leading the MIL in rushing but was held to 45 yards on 17 rough-and-tumble carries. Storer came into the game with just two interceptions thrown in his first four MIL games, but had two costly picks against the Bears.

“We have got a lot of work to do, this is not the way to start our second round,” Rickard said. “We’re trying to move forward and we have to cut down on our errors, mistakes, our missed assignments, and come up with a little more fire than we did.” 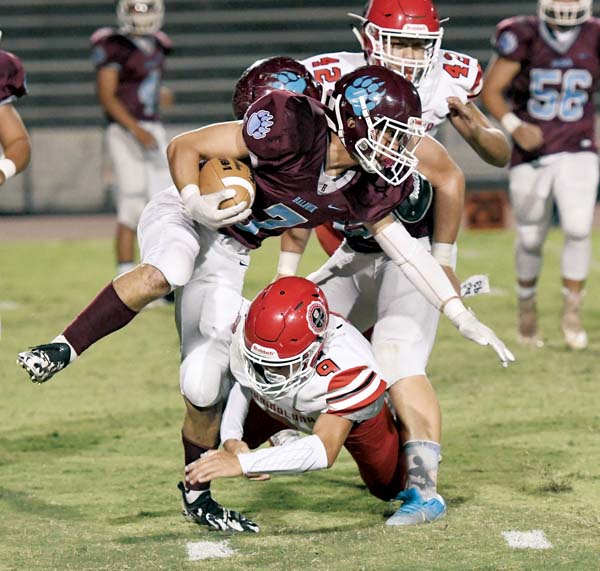