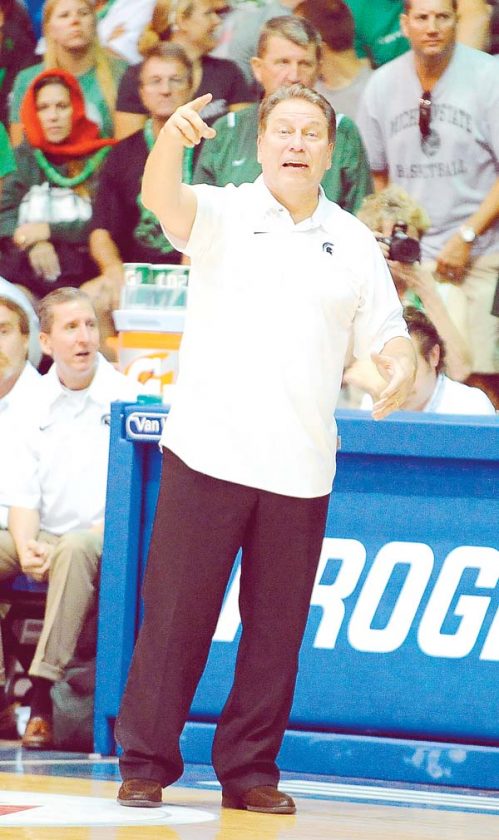 Tom Izzo will be bringing his Michigan State Spartans back to the Maui Invitational for the first time since 2010. The Maui News file photo

A limited number of all-day reserve tickets and single-game general admission tickets will be on sale at the Grand Wailea Resort (free parking available at 3894 Wailea Alanui Drive), Hi-Tech Surf Sports in Kahului and The Snorkel Store locations in Kihei and Lahaina.

The all-day reserve tickets, for the North Grandstands, is $243 a day. Single-game tickets are being sold at three tiers: $89 for first-day games and the third-place game, $32 for the fifth- and seventh-place games in a package deal, $32 for the consolation semifinals (packaged), and $110 for the semifinals and championship game.

Individuals can purchase two tickets per game at a time. Those wishing to purchase tickets to more than one game will need to re-enter the line.

This year’s tournament, set for Nov. 25-27 at the Lahaina Civic Center, brings basketball powerhouses Kansas, Michigan State and UCLA back to the Valley Isle, along with Georgia, Dayton, Virginia Tech, BYU and host Chaminade.

Kansas has won two Maui titles, including in its most recent appearance in 2015 — the Jayhawks also won in 1996. This will be the school’s seventh Maui appearance, tying Arizona and North Carolina for most among non-host programs.

Michigan State will be playing on Maui for the fifth time, having compiled an 8-4 record with a title in 1991.