Na Alii break through vs. Sabers 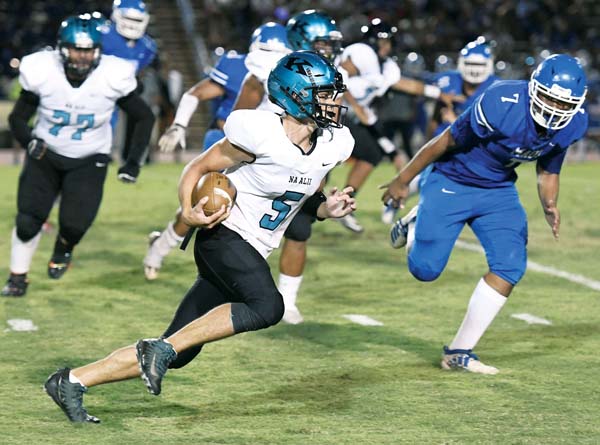 “Man, it feels amazing, all the work that we put in throughout the years,” Hunter said after running for 101 yards and the eventual winning touchdown, completing a pass for 28 yards, catching a pass, punting five times for a 48-yard average, returning four kicks for 72 yards and playing stellar defensive back as well. “To finally get this ‘W,’ words cannot explain this moment.”

The Sabers crept within 14-6 on a 3-yard scoring run by quarterback Brex Delray with 7 minutes, 23 seconds to play. That capped a five-play, 75-yard drive that started with a 51-yard pass to Kaeo Miguel. 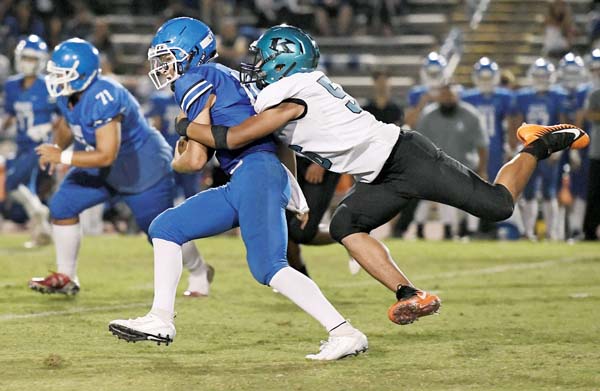 Delray scored on a 1-yard keeper with 1:28 left to make it a two-point game, but Kainalu Pahia knocked down his two-point conversion pass in the end zone and Na Alii ran out the clock. The final drive was kept alive on an 18-yard pass from Delray to Sione Lolohea to the 5 on fourth-and-12.

“This is huge for us, these guys worked hard, especially guys like Trey, guys who have been there since the start, the beginning of what we started,” King Kekaulike coach Tyson Valle said. “These guys hang in there — you ain’t going to find any tougher kids out there than these guys, man.”

Both teams had scoring chances go awry early in the second half before a bizarre exchange left Na Alii on top by two touchdowns.

Hunter returned the third-quarter kickoff 44 yards, and a 15-yard penalty on Maui High at the end of the play gave King Kekaulike a drive that started at the Sabers’ 41-yard line.

Hunter fumbled on the first play from scrimmage and Maui High’s Aasin Laeda recovered at the Sabers’ 41. 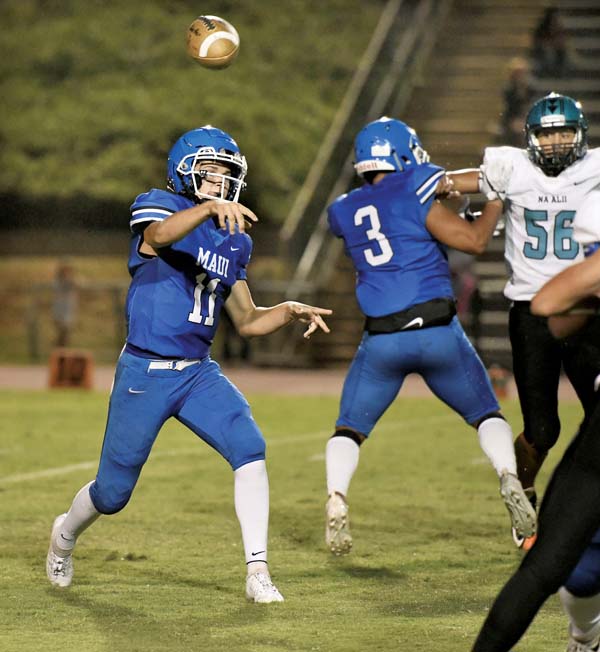 The Sabers reached Na Alii’s 23-yard line before turning the ball over on downs.

After a 39-yard punt by King Kekaulike, a key moment in the game happened on an apparent 38-yard pass from Delray to Riley Johnson that put the ball on the King Kekaulike 23.

There appeared to be a fumble at the end of the play recovered by King Kekaulike, but after huddling the officials ruled that an inadvertent whistle had been blown.

Therefore, the play was run again, although the ball was placed on the Maui High 34 for third-and-10 when the original play had been from the 39 on third-and-5.

The ensuing play was a fumble in the Maui High backfield that was recovered by King Kekaulike’s Isaac Akinaka on the Sabers’ 32. 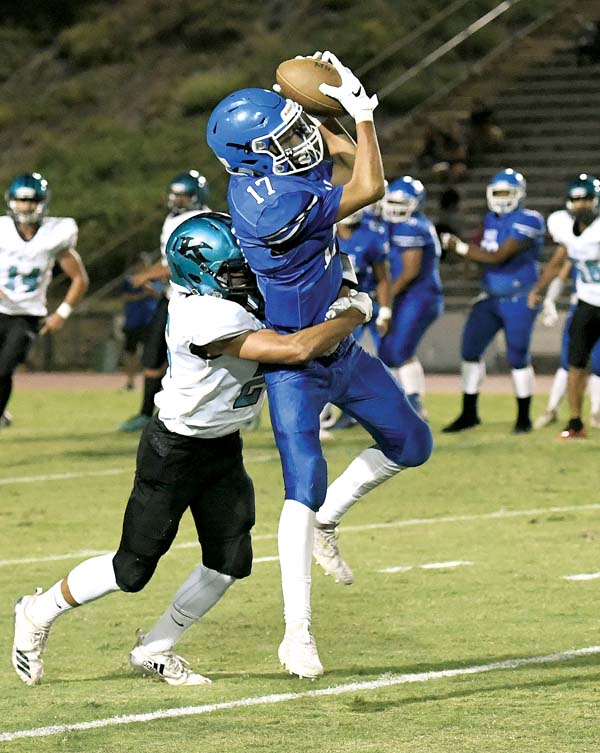 Na Alii nursed a 7-0 lead into the locker rooms on the strength of Kali Kuhaulua’s 1-yard scoring plunge that culminated a nine-play, 57-yard drive.

Hunter ran five times on the possession for 22 yards and completed a 28-yard pass to Seth Myer Fernandez, which took the ball to the Maui High 8-yard line.

Na Alii had a golden opportunity to boost the lead on a 14-play, 60-yard drive that ended in a missed 35-yard field goal try by Ventura with 2:24 left in the half. The possession was kept alive by a 6-yard run by Hunter out of punt formation on fourth-and-3.

“Hey, great job for them,” Maui High coach Rodney Figueroa said. “They’ve been building this program up at King K and they came at us tonight. Great job by their coaching staff getting their kids prepared. They gave us a great game. Our kids didn’t give up until the end. But, you know, they came out — my hats off to them.” 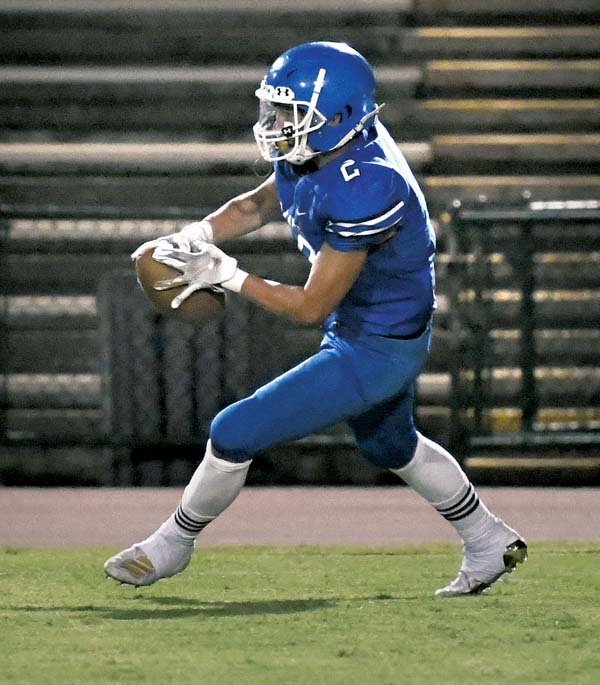 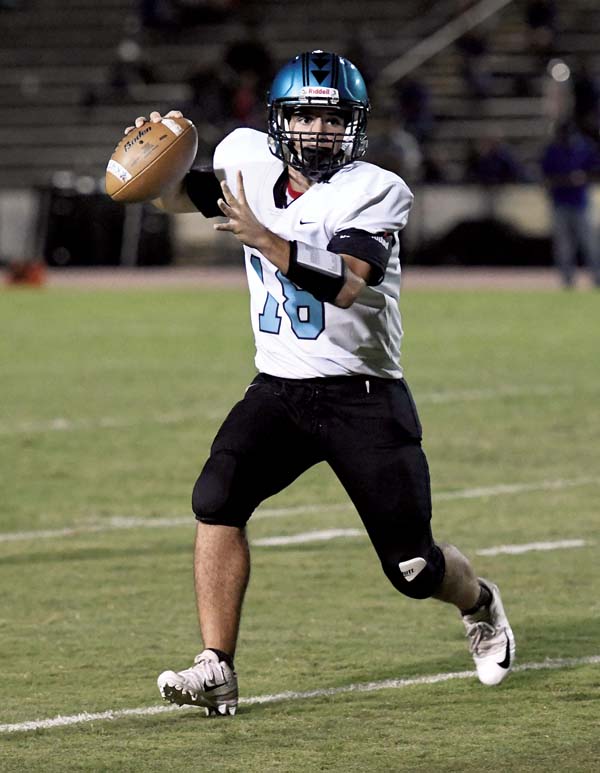