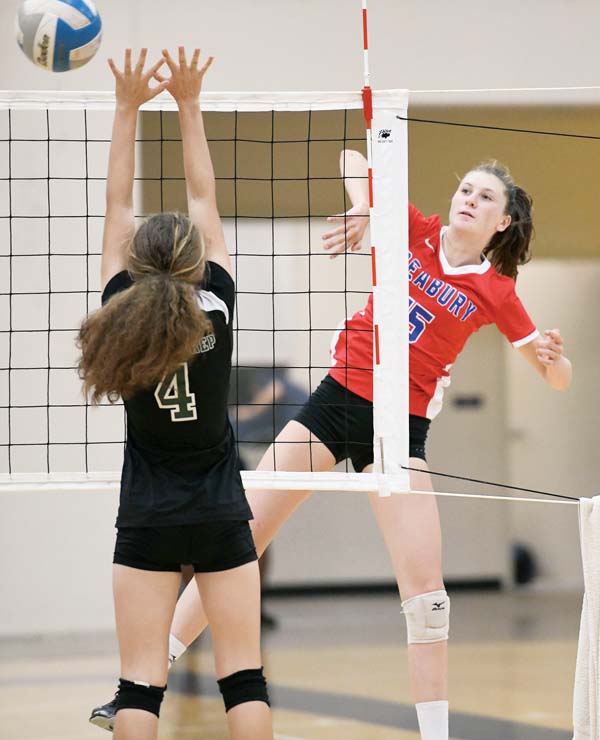 Seabury Hall’s Ella Connor directs a kill against the block of Maui Prep’s Natalie Smart during the third set of the Spartans’ 25-7, 25-18, 25-11 victory over Na Pueo on Wednesday night at Erdman Athletic Center. The Maui News / MATTHEW THAYER photo

OLINDA — The Seabury Hall girls volleyball team had a chance to stretch the bench on Wednesday night at the Erdman Athletic Center.

“We play them right at the end of the season and that will be the most exciting game of our regular season,” Seabury Hall coach Brian Connor said. “We’re really looking forward to it.”

Connor has stepped in for longtime head coach Scott Zucco, who is on personal leave from the team.

“The program is a program that he built,” said Connor, who was an assistant to Zucco for three years. “And we are just continuing that. … Nothing really has changed.”

The Spartans were led by sophomores Bella Jardine, who had eight kills and three aces, and Skylar Conley, who had six kills. Senior Sevilla Leuteneker and junior Ella Connor — both regular starters — each had five kills. Connor added seven digs and freshman Mercedes Winicki dished out 17 assists and had seven digs.

After the first set ended in about 20 minutes, Na Pueo took an 8-6 lead in the second set before the Spartans went on a 5-0 run to go ahead 11-9. Maui Prep’s Sydney Snyder smacked a kill to stop Seabury Hall’s run.

“They had a lot of good servers from behind the line,” Brian Connor said. “And they played some amazing defense tonight. They kept a lot of balls up. They kept coming again and again. They really are improving as a program.” 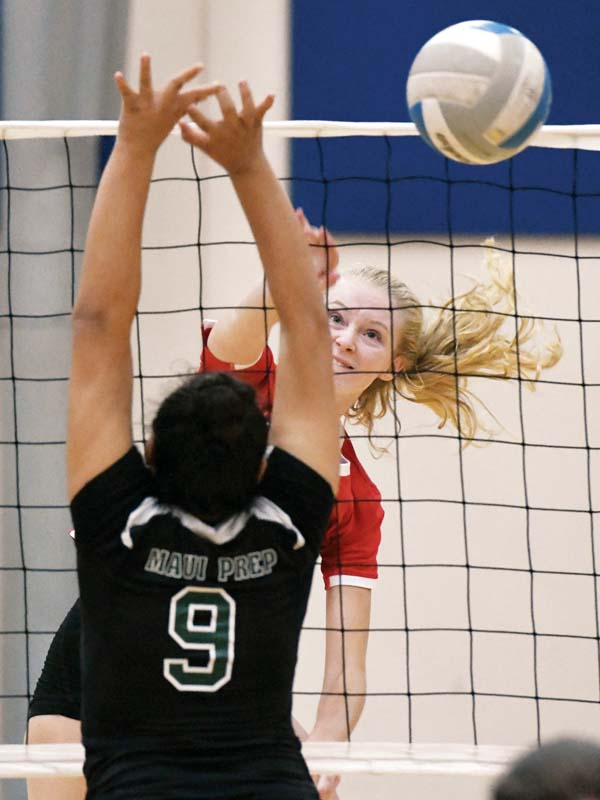 After the Spartans pushed the lead to 17-10, Na Pueo again battled back. A kill by Emma Geng made it 17-13, and a block by Snyder made it 19-15. Na Pueo closed within three twice, but would not get any closer in the second set.

The third set was tied 5-5 before a hitting error gave MPA a 6-5 lead. Conley smoked a kill down the line to tie it again and spark a 13-1 Spartans run that ended on a Snyder block. The match ended on a dink by Anu Akeo.

“We have four juniors and four freshmen with one senior,” Na Pueo coach Bula Mahiai said. “It’s been a welcoming year for our freshmen because they are kind of put to the test. It’s interesting, it’s going to be interesting in upcoming years. Maui Prep will hopefully be setting a new standard for (MIL) D-II.”

The Kaanapali Beach Hotel crew, along with the Auwahi Wind and Kaanapali Beach Resort Association, make their way down Kauai’s South Coast during the Hawaiian Sailing Canoe Association race on Saturday. It was the final race of the season, which started on Maui in June. Before the races started this year, the HSCA voyaged to Kahoolawe for a day of volunteer work. Katie Stephens photo

Seabury Hall’s Ella Connor directs a kill against the block of Maui Prep’s Natalie Smart during the third set of the Spartans’ 25-7, 25-18, 25-11 victory over Na Pueo on Wednesday night at Erdman Athletic Center. The Maui News / MATTHEW THAYER photo