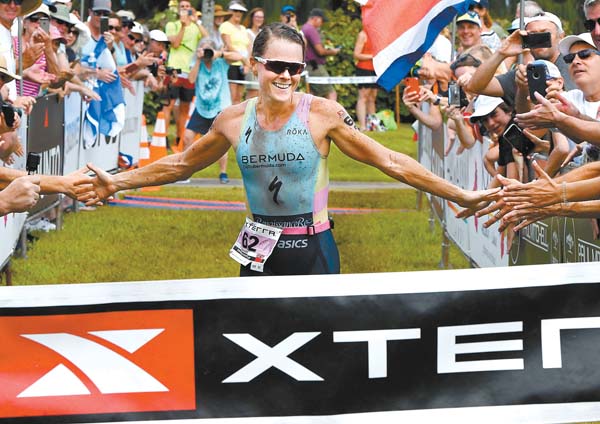 At least not until she was running down the homestretch of the premier off-road triathlon Sunday morning at D.T. Fleming Beach.

“The sand is just so hard,” Duffy said with a laugh. “At the same time, you are just so close to the finish line, and I knew I had won at that point, but I was trying not to allow myself to say ‘Oh, I already won this’ because anything can happen, because once you get off the beach onto this lovely finishing straight, it sinks in and it’s a really great feeling to win five.”

The three-time Olympian from Bermuda, who was also 17th overall, finished the 1-mile open-ocean swim, 19.2-mile trail bike ride and 6.5-mile run in a time of 2 hours, 49 minutes, 24 seconds.

This was over 10 minutes ahead of silver medalist and last year’s champion Lesley Paterson (3:03:36) of California. 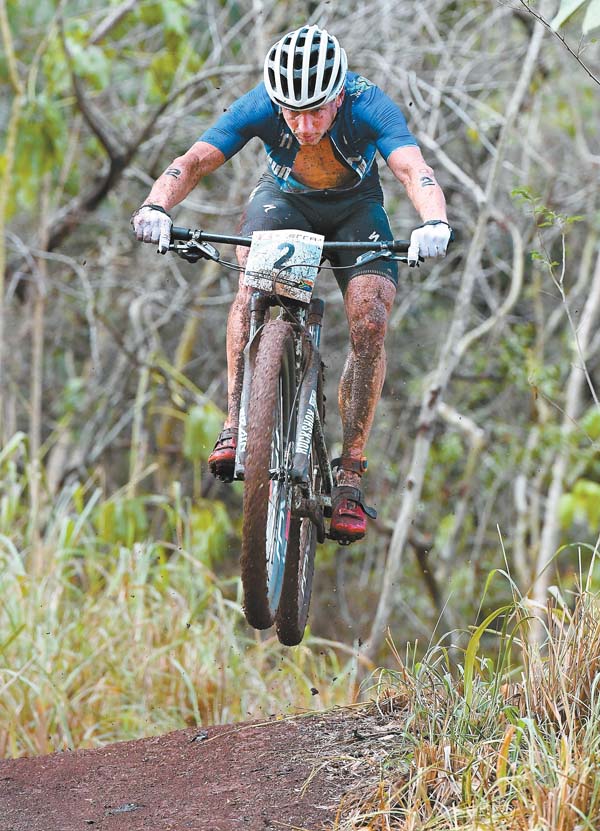 Men’s winner Bradley Weiss of South Africa gets air on a downhill section of the bike course Sunday.

“The main thing this year was just to be healthy, not really winning races,” said Duffy, who was out last season with a foot injury. “Just focus on training steadily and not going crazy, and yeah just staying healthy, and luckily I’ve been able to do that and at the same time build some decent forms. So yeah it’s great to win a world title in a year that has been otherwise quite disappointing, so this is definitely a huge highlight to end my year with.”

In a pre-race interview, Duffy mentioned some nerves for the open-ocean swim and the possible Westside swell, but the conditions on Sunday in Kapalua turned out to be “quite beautiful” as she emerged from the water third overall with a split of 21:19.

“I felt pretty great, I kind of knew I could swim with the top men, so that’s always the plan,” she said. “I didn’t want to overextend myself too much, but I felt pretty good coming out of the water and then onto the bike. I knew I had to make the most of the first 3-mile climb because it’s very technical and that’s not particularly my strength and it rained quite a bit the morning of, and the trails were very, very slippery.”

By the second lap of the bike course, Duffy had created over a six-minute gap from Paterson. Throughout the final miles of the run, she extended her lead even further, averaging a 7:21-mile pace on the zigzagging mountain trails.

“I started to feel more comfortable,” she said. “I was still running hard but it was kind of nice to just breath, like, I didn’t have to do anything special, just not fall over and enjoy the moment.” 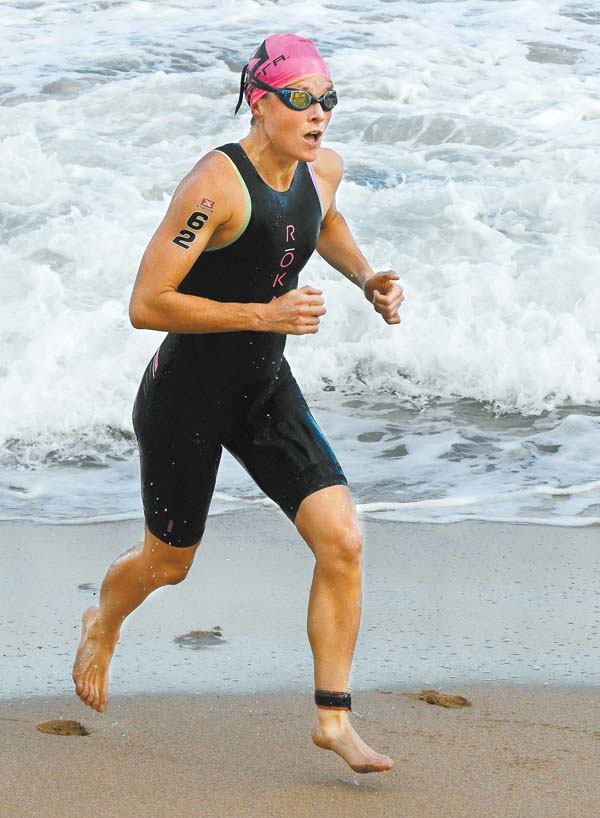 Flora Duffy exits the ocean after the swim portion Sunday.

In addition to Duffy and Paterson, the women’s elite field included Czech Republic’s Helena Karaskova Erbenova, the five-time Xterra European Tour champion, who finished third with a time of 3:04.38.

In the men’s field, Bradley Weiss of South Africa became a two-time Xterra World champion — he won the title for the first time in 2017 — after finishing in a time of 2:33:42.

“Maui never fails to disappoint,” said Weiss, who’s also the 2017-18 Xterra European champion and 2018-19 Xterra Asia-Pacific champion. “The Xterra always sets up an amazing course for us, it was super fun to race.”

Weiss was fifth out of the water, but then moved up to second place during the single-track bike leg.

He then battled for the lead mid-run with Xterra European champion Arthur Serrieres of France and three-time Xterra World champion Ruben Ruzafa of Spain. 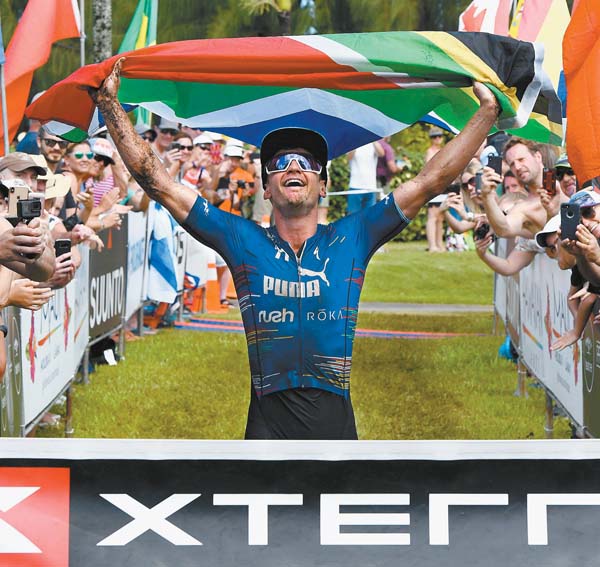 “It wasn’t super muddy out there but I was running a very tight course, and man, I was all over the place at one point and could barely keep a straight line,” Weiss said. “Well done to Ruben and to Art Serrieres here. … We work really well together.”

The pair were 20th and 19th, respectively, after their two-lap ocean swims, but made up a lot of ground on the bike to close the gap with Weiss.

Ruzafa’s strongest leg is the bike, and he grabbed the lead by clocking an average speed of 13.60 miles per hour on the second 10-mile loop. He has recorded the fastest bike split for seven consecutive years.

Serrieres advanced from fourth to first during the trail and sand run, but couldn’t hold off Weiss, who averaged a 6:29-mile pace through the finish line. 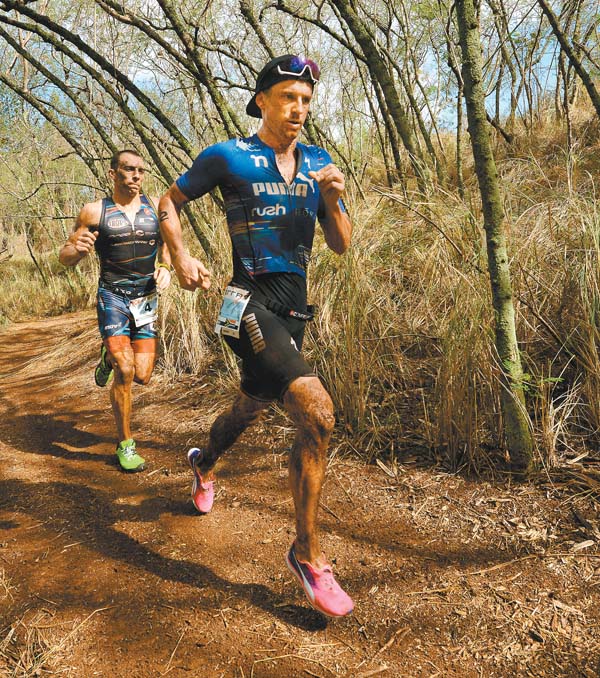 Weiss and Duffy collected $20,000 in prize money for their first-place finishes against 650 professional and amateur off-road triathletes who were representing 42 countries and 40 U.S. states.

“I’m really, really happy with how today went,” Weiss said. “I couldn’t be happier with the win on Maui.”