With support of son, Bayly ready to run in Maui Marathon 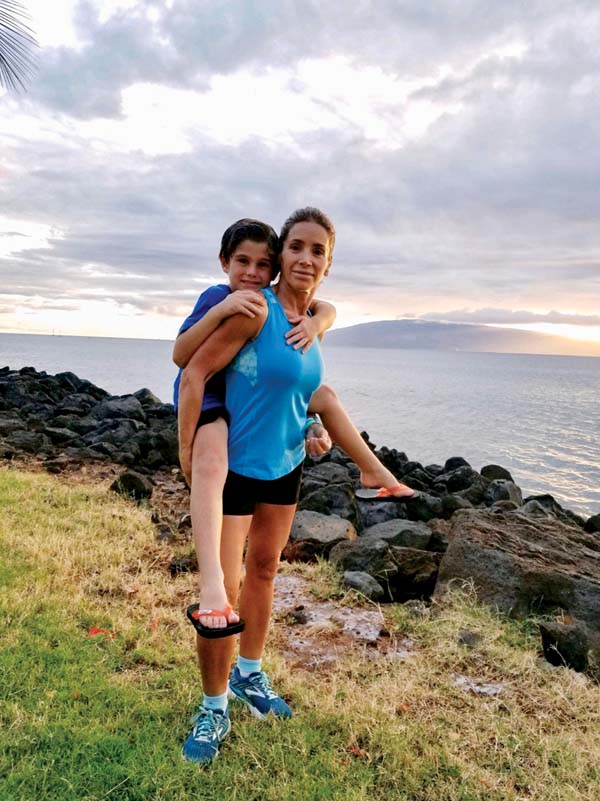 During all 26.2 miles of Sunday’s Maui Marathon, Lahaina resident Kayanna Bayly will be reminded of why she’s running and who she’s running for.

Her 7-year-old son Blake was diagnosed with Autistic Spectrum Disorder (ASD) three years ago, a disorder in which children can experience challenges with cognitive function, social and verbal communication, and behavior.

The single mother-son duo have been on a journey to spread autism awareness and to show other families and friends that they are not alone.

The 48-year-old Bayly — who has never raced a 5K, 10K or half marathon — has the ultimate goal of climbing Mount Everest for autism awareness.

In the meantime, she wants to overcome the obstacle of completing a marathon while also beating stereotypes of what it’s like raising, meeting, playing or teaching a child with autism.

“The glares, the stares, the comments from people not understanding autism. … At one point it just got so overwhelming,” she said. “I think the more they understand, the more compassion and the more empathy they’ll have.”

At one time, Bayly even made a shirt to train in that had “don’t underestimate this autism mom” printed on the front. On the back, it read “with God all things are possible.”

Bayly is also an advocate for getting parents and their children better access to the tools, services and resources needed to succeed in school, such as Applied Behavior Analysis (ABA), which is a type of therapy that focuses on improving social skills, speech and reading, as well as basic education about hygiene and punctuality.

Gaining access to such resources, however, can oftentimes be “overwhelming and frustrating,” Bayly said.

“I want all educators, including principals, vice principals, general ed teachers and aids to understand autism, not the definition of autism but how autism, and all the disabilities under the autism umbrella, affects children differently,” she said. “The universal goal is to help them feel accepted, understood and included so they can be successful academically and socially.”

Bayly pointed out that, in 2018, the Center for Disease Control and Prevention estimated that 1 in 59 children are diagnosed with ASD. By spreading awareness of how prevalent the disorder is, she also hopes to share coping mechanisms for emotional, physical and financial stress, such as meditation, in-home therapy and online support groups.

“A few things that have helped me through this journey is my faith,” she said. “Also, meeting other parents raising children with autism, supportive friends and parent training. (Blake) has taught me so much patience and how to be a better mom.”

Blake has also helped his mother with the patience and perseverance it took to train for the Maui Marathon.

“There were days my feet hurt so bad I thought my marathon was over,” Kayanna Bayly said. “My son encouraged me to never give up. He told me every day to believe in myself and to do my best… . And running for a cause allowed me to take the pressure and anxiety in everything off me and focus on my running, and every mile of the marathon, I won’t forget that.”

Not only has the 7-year-old been supportive of his mother’s cause, he also has put her through “Blake’s bootcamp,” which has contributed to Kayanna’s progress with her personal health and fitness.

Over three months of marathon and weight training, she has lost 46 pounds.

“He would make me do circuit training and he would make me do a maze of legos, jumping over toy cars, doing squats, doing lunges, and if I did something wrong, he’d tell me, ‘Back to the beginning,’ “ Bayly said with a laugh. “He encourages me to train, he always tells me he believes in me and he’s my biggest fan.”

Bayly hopes to see her son at mile marker 19 on Sunday, cheering and holding an encouraging sign.

“He doesn’t quite understand what a marathon is, but he does understand I’m running a very long way and that I’m running for autism awareness.” she said. “He says he’s proud of me.”