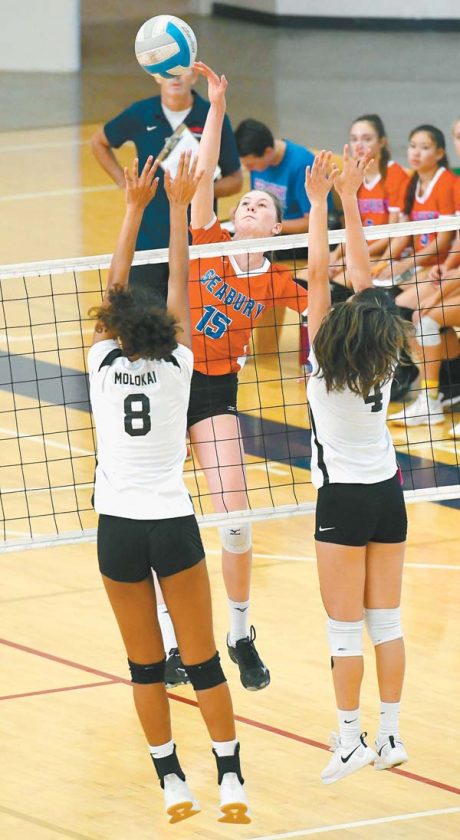 Seabury Hall’s Ella Connor attempts a kill against the block of Molokai’s Saije Aiana (left) and Jordyn McCutcheon during the first set of the Spartans’ three-set victory over the Farmers on Saturday. The Maui News / MATTHEW THAYER photos

OLINDA — The Erdman Athletic Center was much emptier than for senior night just a few hours before, but the Seabury Hall girls volleyball team still brought all the hype Saturday.

Ella Connor led the Spartans with 16 kills, pulling the team to a sweep of Molokai 25-16, 25-22, 25-14 to clinch the Maui Interscholastic League Division II regular-season championship and the state berth that goes with it.

“I think our energy levels were a bit lower today, but that’s just because last night we exerted all of our energy onto the court, just trying to play our hardest and trying to play for our seniors,” Connor said. “But today I thought we played well.” 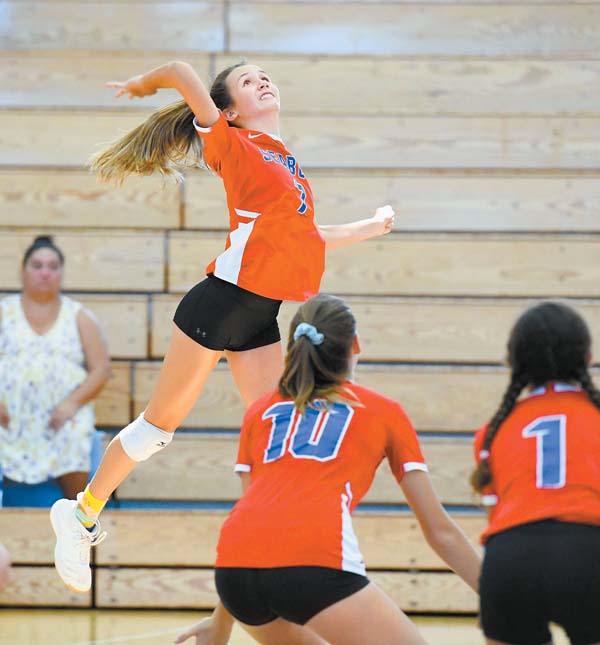 Senior starter Anu Akeo missed the match for the SAT.

“She’s an impactful player, and I was a little nervous,” Seabury coach Brian Connor said. “I had a plan A and plan B, but Bella Jardin stepped up into that role and did really well.

“It’s also hard to come back after an exciting match like (last night) and keep the energy up and have the focus that you need to go up against a team like that,” he added. 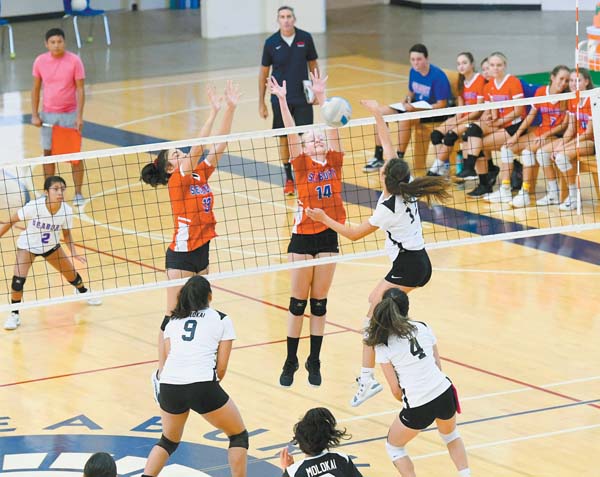 Molokai’s Lia-Chae Meyer hits against the block of the Spartans’ Skylar Conley (left) and Sevilla Leuteneker.

After Friday night’s sweep of Molokai, Seabury knew the Farmers were planning to come back hard for Round 2.

Molokai took off right out of the gates Saturday, opening with a block by Saije Aiana and kill by Lia-Chae Meyer, who finished with nine kills and eight digs. Soon after, Seabury found some momentum and went on a 7-0 run off Ella Connor’s four kills and a couple aces by Winicki to lead 13-6.

The Spartans moved up to 24-16 after a block by Skylar Conley and Connor’s spike. A long shot by Molokai ended the set.

The second was much closer, with the Farmers staying no more than five points behind the Spartans. After a Seabury service error and a kill by Hokuele Horswill-Carrol, Molokai got within 24-22, but a kill by Conley finished the set.

Seabury powered through the third set, moving ahead 19-13. A 6-1 run ended the game, which included a service error and kills by Connor and Jardin. 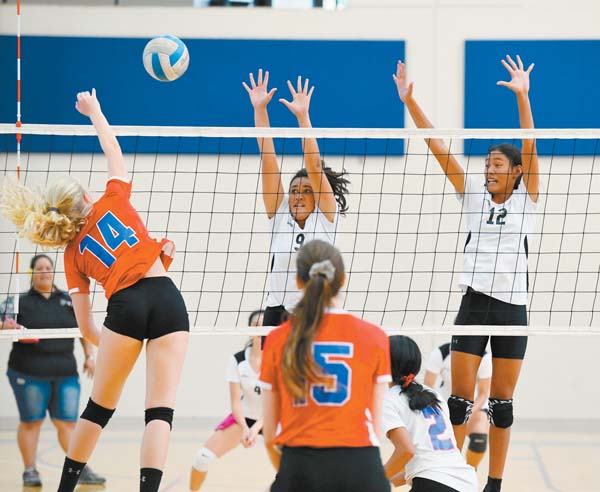 The Farmers’ Sadie Aiana (from right) and Haliaka Lima English defend a shot by Leuteneker.

“I think today was a little better but not quite. … Just a lot of things to work on,” Molokai coach Mahealani Rawlins said. “We are just trying to find ways to close out those mistakes. The passes were a little bit better.

“We have about eight more practices left to come back, so a lot of hard work left,” Rawlins added.

The Spartans also know they have a lot of work left to do as the prepare for the MIL tournament, which begins Oct. 16 at Seabury.

“This year I asked the team what they want to do,” Brian Connor said. “I feel like all of the girls have a really high level of volleyball IQ, so they can see where their strengths and weaknesses are, so we’ll develop a plan together as to how to move forward to compete in that MIL tournament and then again at states.”

After playing their final regular-season match against Maui Prep on Wednesday, Ella Conner said the squad will be taking some time to fine-tune their game tactics. 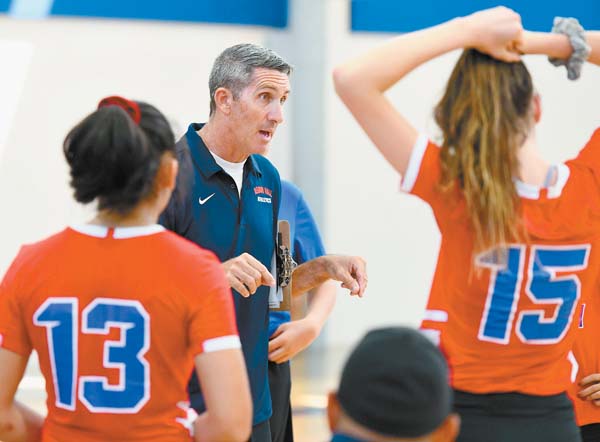 Seabury Hall coach Brian Connor talks to his players during a timeout.

“We’re also probably going to work on our attitudes while we’re playing and becoming more of a team together,” she said.