Lunas prepare for another battle with Rough Riders

So far in 2019, history is repeating itself.

Last week, the Rough Riders beat Kamehameha Hawaii to gain a date Saturday against the Lunas, the three-time defending state champions who are again seeded No. 1. The game is set for 7 p.m. at Sue Cooley Stadium — the winner will advance to the state championship game set for 1 p.m. Nov. 29 at Aloha Stadium.

Lahainaluna (9-1 overall) hopes the similarities continue: Last season, the Lunas easily dispatched Roosevelt 48-10. Those Rough Riders were led by Sky Ogata, who is again the team’s leader this season.

“They’re a well-disciplined team,” Lahainaluna co-head coach Dean Rickard said of the Rough Riders (10-2) on Tuesday. “They got that kid Sky Ogata — he’s their weapon that they’re depending on all these times. Eventually we’re going to definitely key on him.” 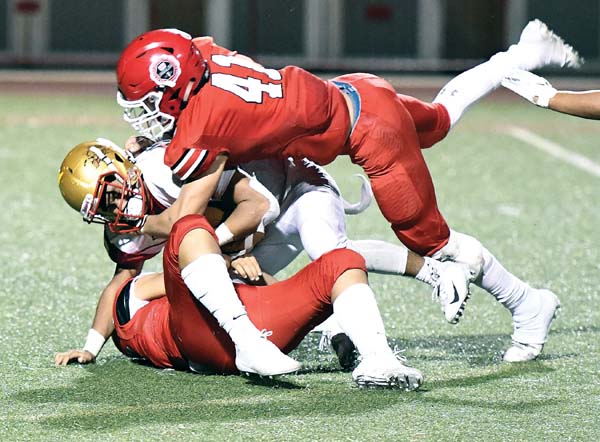 The Rough Riders — the Oahu Interscholastic Association runners-up — did add Shepherd Kekahuna from now-defunct Saint Francis School. Kekahuna had 11 tackles, including 1.5 for loss, and forced a pair of fumbles, returning one for a touchdown in their 31-7 win over the Big Island Interscholastic Federation champion Warriors. He also had four kick returns for a total of 67 yards.

Rickard and several members of the Lunas’ coaching staff traveled to the Big Island to watch the Rough Riders’ first-round win.

“As far as offensively, they’re fundamentally sound,” he said. “They have been running that scheme even last year when we played them. They’re experienced. I think the addition of those (three) Saint Francis players really helps them out a lot more as far as the overall speed this year compared to last year’s team.”

Rickard said he expects a much tougher game from the Rough Riders this time around.

“They’re very well-coached, no doubt, and they’re hungry to come here and show that last year was a fluke,” he said. “Overall, they’re a lot more quicker than they were last year. Last year, they were bigger on the line. This year, they have good size, don’t get me wrong, but they definitely look more quick. That’s something that we’re going to be prepared for.”

The Lunas will have had four weeks between games when they take the field on Saturday.

“That’s been the most difficult thing for us,” Rickard said. “We’ve been taking it easy the last week since our scrimmage with Baldwin, just keeping the kids in condition, strength training, speed and quickness. Basically doing their football homework, having them study films. … We got film breakdown, got it to the kids and told them to study the guy they were going up against, so a lot of mental preparation, mental focus.”

The time off has allowed all of the Lunas to heal — defensive back Devon Sa-Chisolm is expected to start after missing three games with a sore shoulder, and quarterback Esekielu Storer is fully healed from shoulder fatigue, although he did not miss any games.

Storer finished third in the Maui Interscholastic League in passing, with 795 yards, seven touchdowns and five interceptions, completing 51 of 90 passes.

“We’ve got some normal bumps and bruises here and there,” Rickard said. “Devon had a nagging injury — I would say he’s 95 to 98 percent now. We had our quarterback, he had a little pain to his shoulder, but he looks fine now.”

Roosevelt coach Kui Kahooilihala knows his team must be ready to play.

“Lahainaluna is good team,” Kahooilihala said to scoringlive.com this week. “It’s going to take a team effort, all 11 guys to put in the work to get the ‘W,’ so we gotta bring our A-game this week.”

No. 1 Saint Louis vs. Mililani at Aloha Stadium, 7 pm. 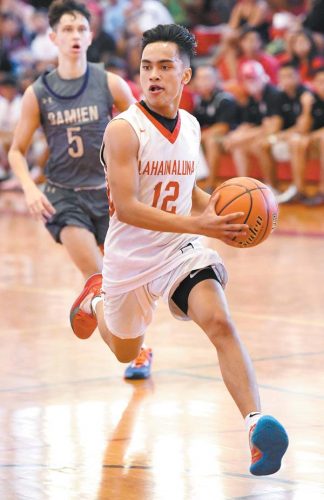