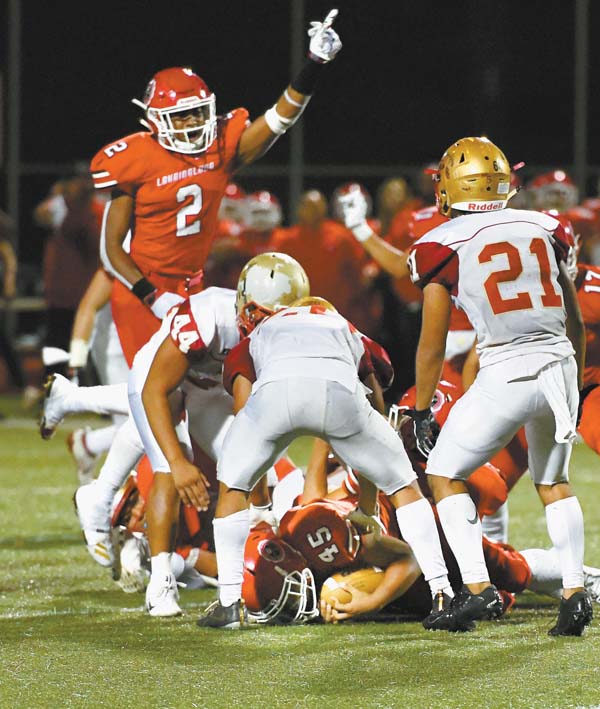 LAHAINA — This class of 19 seniors for the Lahainaluna High School football team has reached its final destination.

On Friday at 1 p.m. at Aloha Stadium, the Lunas will play for their fourth straight Division II state title against Kapaa.

The Lunas (10-1) got there with a methodical 35-0 win over Roosevelt (10-3) on Saturday night at Sue Cooley Stadium in the First Hawaiian Bank/HHSAA state semifinals.

These Lunas did it in an impressive fashion: Junior quarterback Esekielu Storer misfired on his first four passes before connecting on his last nine for 202 yards and four scores; Joshua Tihada ran 27 times for 162 yards and a touchdown, the 64th of his impressive career; and the defense and special teams had five takeaways.

“We knew the kind of team they were, they were explosive, they’re very physical, they’re very well-coached and disciplined, and they gave us everything we expected,” Lahainaluna co-head coach Dean Rickard said. “Fortunately, we were able to make the necessary adjustments and come out on the winning side of it.” 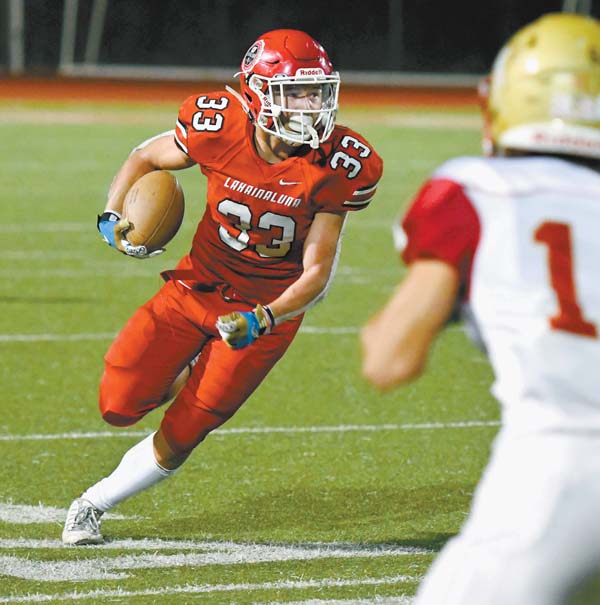 Joshua Tihada of the Lunas carries the ball Saturday.

Lahainaluna took total control in a three-play span that took just 13 seconds off the clock in the final minute of the first half.

Clinging to a 7-0 lead, the Lunas’ Brysen Rickard forced a fumble by Roosevelt running back Mitchel Camacho at the Lahainaluna 22-yard line. Three straight complete passes by Storer — his first three of the game — moved the ball to the Lahainaluna 48.

Then, the three-play lightning strike virtually put the game out of reach.

Storer hit Kai Bookland in stride down the right sideline for a 52-yard touchdown pass that made it 14-0 with 59 seconds left in the half.

Lahainaluna’s Nainoa Kulukulualani-Sales forced a fumble by Shepherd Kekahuna on the ensuing kickoff, and the Lunas’ Tysyn Estrella recovered on the Roosevelt 28. 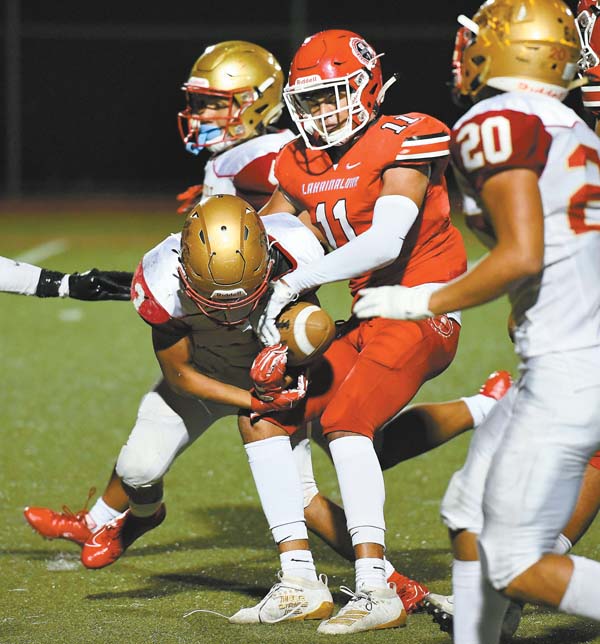 Storer hit Bookland on the next play to push the lead to 21-0 with 46 seconds left in the half.

“Never, never done that in my life,” Bookland said of his two scoring receptions in 13 seconds. “That was crazy.”

The Lunas’ 5-0 advantage in the turnover battle was an absolute key to the easy win.

“Man, our defense and special teams played great,” said Bookland, who had two fumble recoveries. “I know the last four weeks we’ve been working on stripping drills and fumble recovery and stuff like that, and tonight we came in the first half and showed them for sure.”

The Lunas pushed the lead to 28-0 on an 18-yard pass from Storer to Brian Sandoval for a touchdown with 7:49 to go in the third quarter. That capped an 11-play, 83-yard drive that featured five Tihada runs for 37 yards. 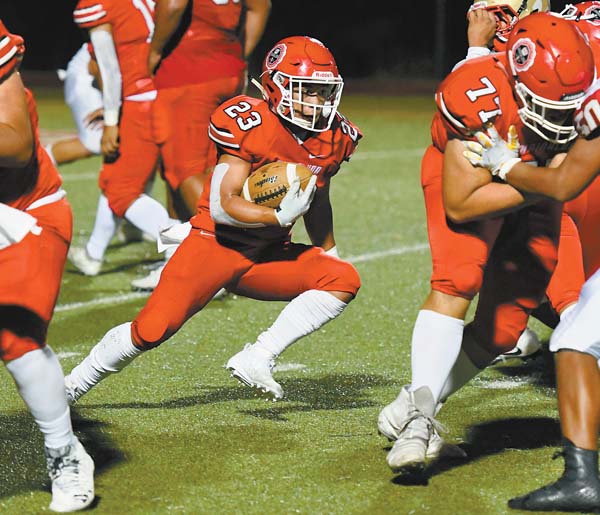 “Very emotional and, like, sad,” Tihada said when asked about playing the final home game of his storied career. “You know, we just have to keep moving on to the next, just like every other week. We have to work hard, stay focused, act like we’ve been here before.”

The Lunas turned on the mercy-rule running clock with 6:26 to go in the third quarter when Storer completed his ninth straight pass, a 59-yarder to Devon Sa-Chisolm for a touchdown.

The Lunas took a 7-0 lead with 3:11 left in the first quarter when Tihada dove into the end zone from 1 yard out. That capped a nine-play, 65-yard drive that featured seven carries by Tihada for 46 yards.

The play before the score was a 15-yard run by Derek Perez to the 1, where he fumbled — the ball was recovered there by Bookland.

The drive started when Perez smacked Roosevelt receiver Kekahuna. Perez’s hit forced a fumble that was recovered by Matthew Rabino at the Lunas’ 35-yard line. 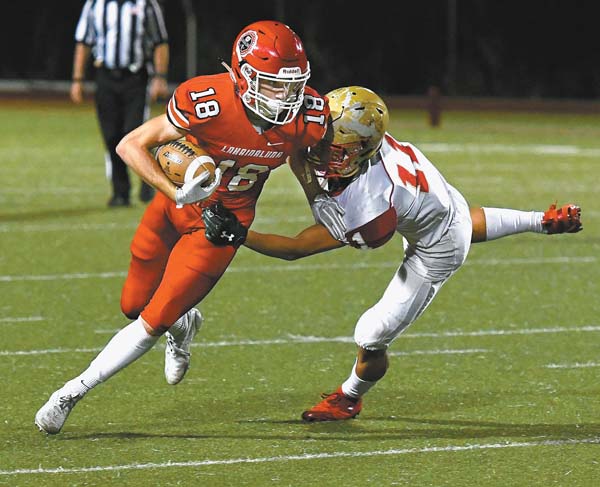 Storer was limited to taking the field to start the second quarter because of what coach Rickard said was shoulder fatigue.

“I kind of got my mindset like somewhere else, so after those four throws that I missed, I put my mindset straight to those throws and I completed them,” Storer said.

Bookland had five catches for 105 yards and the two key scores.

“There’s pretty much nobody like him in the state,” Storer said of Bookland. “I love that guy, like I love all my receivers and my O-line.”

“Oh man, they’re good, they’re an awesome team,” Roosevelt coach Kui Kahooilihala said of the Lunas. “That’s why they’re No. 1, man, in our division. They’re a great team and they’re well-coached, too.”

With 10:55 left in the third quarter, umpire Rod Alama collapsed on the field between plays and had to be removed by ambulance. Medical crew on the scene said he suffered an apparent heart attack, but his prognosis was good.

MACC President and CEO Art Vento stands on the construction site of the Yokouchi Pavilion in this August 2010 photo. Vento said the addition of the pavilion helped the MACC stay ahead of the curve and accommodate larger crowds and more big-name stars, including Elton John. The Maui News / AMANDA COWAN photo

Everett Brown hands a Mother’s Against Drunk Driving goodie bag to a sober driver Friday night during a police DUI checkpoint organized in memory of his 19-year-old daughter, Hannah Brown, who died in a traffic collision with a suspected drunken driver. Traffic officer James Taylor was among officers running the checkpoint on Kuihelani Highway.

Chaminade coach Eric Bovaird poses for a photo with his children Jane, 9, and Brooks, 7.

Hawaii quarterback Cole McDonald throws a pass next to San Diego State linebacker Caden McDonald during the first half of the Rainbow Warriors’ 14-11 win over the Aztecs on Saturday night. AP photos

Joshua Tihada of the Lunas carries the ball Saturday.

Stella Valdez slams the lip on her way to a win in the open women division.

Charlene and Everett Brown hold a banner showing their 19-year-old daughter, Hannah Brown, who was killed in a June 23 traffic collision when her car was hit by a suspected drunken driver on Kuihelani Highway in Kahului. The Brown family joined police and Mothers Against Drunk Driving volunteers at the inaugural Hannah Brown Memorial Intoxication Checkpoint on Friday night. The Maui News / LILA FUJIMOTO photos