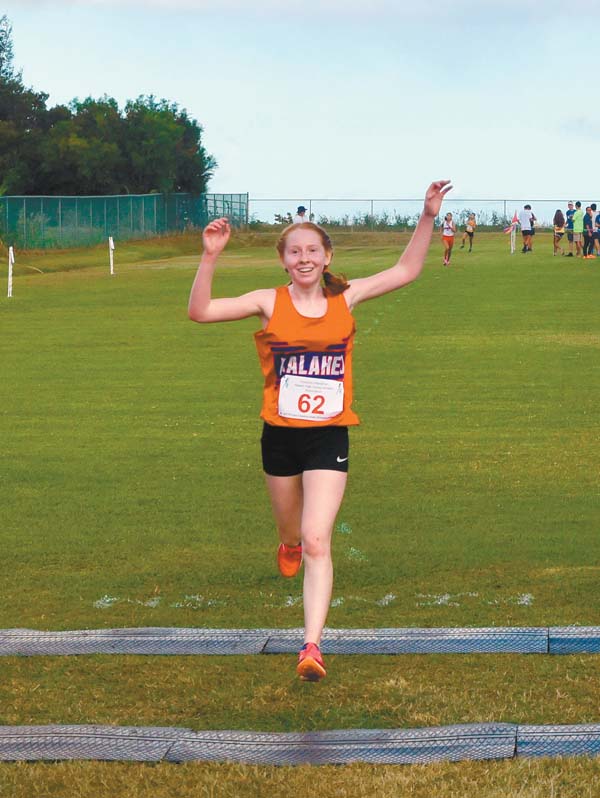 Saturday morning at Seabury Hall, she stood alone at No. 1.

The Kalaheo High School sophomore tracked down Seabury Hall sophomore Kaylee Volner with about half a mile to go in the 3.1-mile (5-kilometer) course and won in 19 minutes, 37.87 seconds.

Naylor bided her time early in the race and passed each and every runner in front of her. 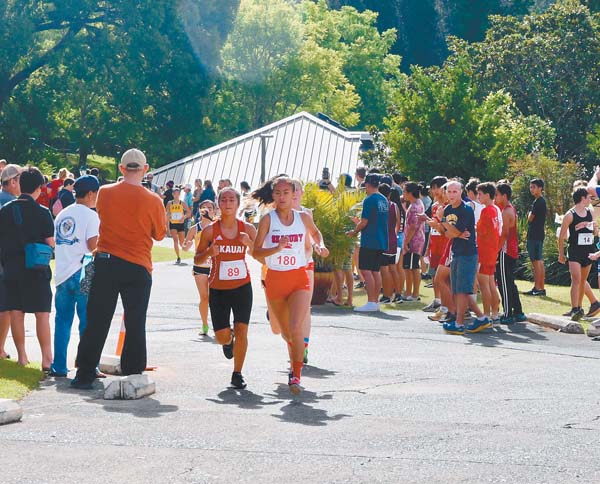 Kaylee Volner of Seabury Hall charges down the hill next to Kauai’s Emma Burgess on her way to a second-place finish Saturday.

“I started out in about 30th or 40th, so I had to kind of start picking people off within the first half-mile, but then definitely within the 2-mile (mark), I passed the fourth- and third- and second-place person,” Naylor said. “Then I decided to try and take the first-place (Volner) within the last half-mile or so.”

Volner finished second in 19:58.30, 20 seconds behind Naylor, to lead the Maui Interscholastic League champion Spartans to second place in the Division II team standings with 40 points, 11 behind Hawaii Baptist Academy.

Volner needed time in the medical area after expending all of her energy in the race.

“Oh, I feel so overwhelmed right now,” Volner said. “It’s such an accomplishment for me, it’s been my goal (to do well), so I’m actually so proud of myself right now.”

“I’m also so proud of my teammates because they pushed me since the beginning, eighth grade actually,” Volner said. “I’m so honored to be able to run that time here on a very hard course, my home course.”

“Actually, I couldn’t have done it without my coaches, teammates, past teammates — I’ve trained with Dakota Grossman, who’s a four-time state champion; Veronica Winham, she’s a two-time state champion, they’ve all done amazing; and Chloe Gangnath, who won last year,” Volner said. “They’ve actually all texted me this morning, wishing me luck. Definitely, it would be an honor to be added to that list.”

Ryden, a senior from Canada, edged Volner for the MIL title last week on this same course.

“It was hot, but it’s a home course, so we know all the turns, we know all the hills, we know where to cut places off,” Ryden said. “So, it’s so fun having everyone from all over the state here to run. It’s just a whole different feel.”

Ryden was impressed with Volner.

“She left everything out there, she pushed so hard, she really wanted to do well today,” Ryden said. “She did amazing. I’m so proud of her, she left it all out there.”

“The team worked hard, you know, we’re a young team, so coming into this event, dealing with their own expectations or what they feel in the crowd in our home field, there’s a lot of energy in it, so hopefully it was a good experience for them to move forward,” Seabury Hall coach Bobby Grossman said. “Kaylee made it interesting for us today and the end, made it fun. She did everything possible she could, she pushed the pace today, which in the end made her legs a little shaky, but you can’t say anything more about what she did.”