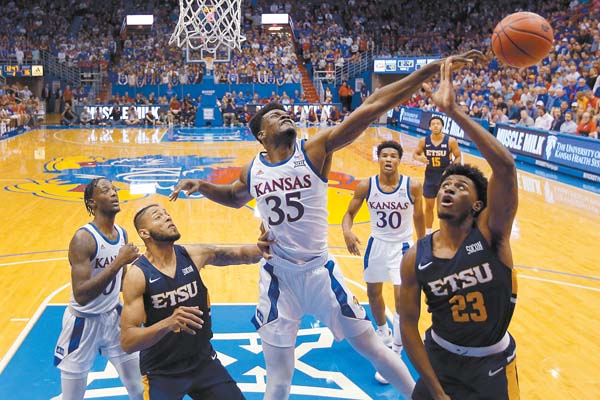 LAWRENCE, Kan. — The buzzer had just sounded on another win for Kansas when coach Bill Self collared East Tennessee State guard Bo Hodges in front of his bench and whispered something in his ear.

Then he did the same to the Pirates’ Tray Boyd III.

“He was just saying we’re a good team. We fight to the end. We’re tough to play,” Boyd said, long after the fourth-ranked Jayhawks weathered a second-half charge for a 75-63 victory Tuesday.

Kansas (3-1) led by as many as 18 early in the game before the Pirates whittled the lead to 43-31 by the break. East Tennessee State kept charging the final 20 minutes, closing within 61-56 with just over 5 minutes to go, before the Jayhawks finally eased away.

“I thought the first punch they gave us really put us down,” Pirates coach Steve Forbes said, “and it was really hard to battle back from there. But our team, one of our mottos is we’re gritty, grimy, tough and together, and I thought we showed that most of the game.”

Udoka Azubuike pounded home 21 points on an array of dunks to lead the Jayhawks. Devon Dotson had 19 points, most of it coming early in the game, and Marcus Garrett finished with 13 points in Kansas’ last game before traveling to the Valley Isle for next week’s Maui Jim Maui Invitational.

The Jayhawks open the tournament — which also includes No. 3 Michigan State — on Monday against host Chaminade at the Lahaina Civic Center.

Hodges wound up with 22 and Lucas N’Guessan scored 11 for the Pirates (3-1). Daivien Williamson came off the bench to add 10.

The game looked like it would be The Dotson Show from the opening tip, when the sprightly guard coasted in for a layup. He proceeded to hit the Jayhawks’ only 3 of the first half, threw an alley-oop to Silvio de Sousa for an easy dunk and knocked down a pair of free throws during a big early run.

“We wanted to jump on them early and really get that first hit in,” Dotson said, “so just bring the energy and tenacity from the start and that can sway a game.”

The Jayhawks pushed the lead to 31-13 before Dotson checked out for the first time.

They never looked quite as good again.

N’Guessan, who had played in Allen Fieldhouse with Oklahoma State, began a second-half charge for the Pirates that trimmed their deficit to 45-36 by the first media timeout.

The Pirates began to take advantage of the turnover problems that plagued Kansas in its season-opening loss to Duke, too. Ochai Agbaji was stripped twice in a span of about a minute, and Garrett and Tristan Enaruna had their pockets picked on back-to-back trips.

Seven times in a span of 12 possessions the Jayhawks turned the ball over.

East Tennessee State’s confidence rose as shots started to fall. Boyd knocked down a pair of 3-pointers, then Patrick Good added two of his own, getting the Pirates within 61-56 with 5:52 left.

His one-handed jam over N’Guessan raised the crowd to its feet, and the 7-footer’s two-handed dunk drew a foul and left the rim rattling as the teams retreated to their benches for a timeout.

“The guys did a good job of feeding me the ball,” Azubuike said, “so I went to work.”

Boyd was left marveling: “What do y’all feed him? Goodness,” he said.

It was still 61-56 when Garrett was fouled and made both free throws. Then, after Williamson turned the ball over for East Tennessee State, de Sousa threw down an alley-oop dunk in transition that helped to punctuate the win for the Jayhawks.

“I thought we played a really good team,” Self said. “I really like their team. They’re going to be really good. They’re veterans, they can stretch it and they made some hard shots late to get back in the game, but I thought we closed it really well.”