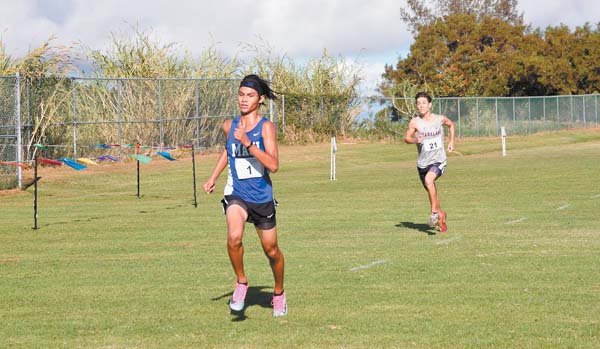 Maui High School’s Hunter Shields sprints down the homestretch ahead of Hanalani’s Adam Harder on his way to winning the boys state cross country title on Saturday at Seabury Hall. The Maui News / DAKOTA GROSSMAN photos

OLINDA — Maui High School junior Hunter Shields knew that if he stayed patient in the front pack, he had a chance to win the Honolulu Marathon Cross Country State Championship.

And that’s exactly what he did Saturday at Seabury Hall.

“I felt pretty excited to come in first,” Shields said after leading a strong Sabers contingent Saturday. “I was just really tired, and didn’t know what to think when I finished.”

Shields, who won the Maui Interscholastic League title on this same course a week ago, became the first Valley Isle runner to win the boys individual state crown since Lahainaluna’s Damian Potts in 1991. 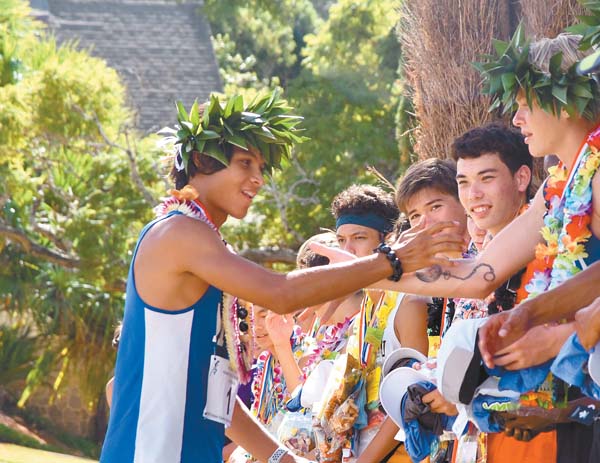 Shields was the state runner-up last year as a sophomore, and said that all he planned to do this season was to “just stick with the top runner and push harder than them at the end.”

“I’m proud, you see the finishing product, but it’s all the work that was put into it,” Sabers coach Jared Welch said. “It’s not something that just happens.”

Maui High senior Damon Wakefield came in third with a time of 16:33.99, while teammate Adam Hakola followed in fourth place in 16:46.87.

“Overall, senior year was a rocky year, I had a few ups and downs, but our team really pulled it together, and this was a good last race,” Hakola said. “I know we gave it our all, I know we did.”

Maui High’s 1-3-4 finish marked the third time in state history that a school claimed three of the top four positions in the boys race — Shields, Wakefield and Hakola also did it last year, and Radford completed the feat in 1977, according the Hawaii Prep World. 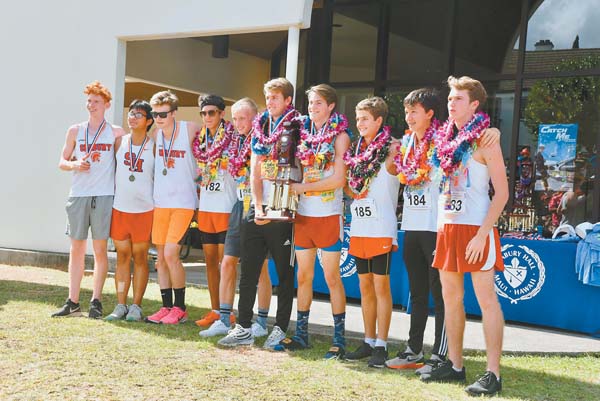 The Seabury Hall boys team poses with their championship trophy.

Like they’ve done all season, the Sabers trio stayed in a tight pack from the gun, running just stride lengths away from Harder, Moanalua’s Andre Marin and Iolani’s Joshua Lerner.

Wakefield was in the lead coming out of the first mile, but Harder slowly moved into the front mid-race. Shields stayed tucked behind Harder just like he planned, waiting to kick on the final 200 meters for the gold.

“My team worked hard today, they did their best,” Shields said after his win. “Hopefully it was enough to finish on top, but if not, there’s nothing we can do about it and I know that they gave their best.”

“Disappointed with the outcome but I can’t be disappointed with their effort, not just from today, but the effort they put in all season,” Welch said. “They trained really hard all season, and it’s always the goal to win, but I mean there’s only one team who can win. … Each team has their formula, and whenever you’re in the same conversation with big teams like Punahou and Iolani, that in itself is an accomplishment.” 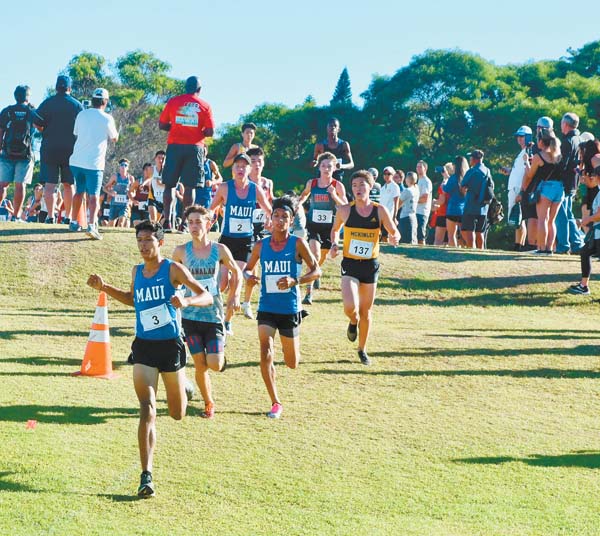 The D-I championship went to Punahou with 41 points. Kalani placed third with 129 points.

“Last year we were runner-up to Hawaii Baptist, they’re a great program and I give them credit because each year they are always showing up to compete, so what we said with our team, is that rather than focus on a championship, we had to get them to focus on running their best individual race they can,” Seabury boys coach Bill Frampton said. “If they could run their best individual race — fastest race, smartest race — the times, the placings, the medals take care of themselves.”

It is the third state team championship for the Seabury boys, and the second at the D-II level — the Spartans won it all in 2013 and also in 1984, when there was only one division.

“These are just an incredible group of young boys that stuck together during the ups and the downs, and put it together today on the day of the state championship,” said Frampton. “For them to have the faith and belief that they can do it, was so exciting.”