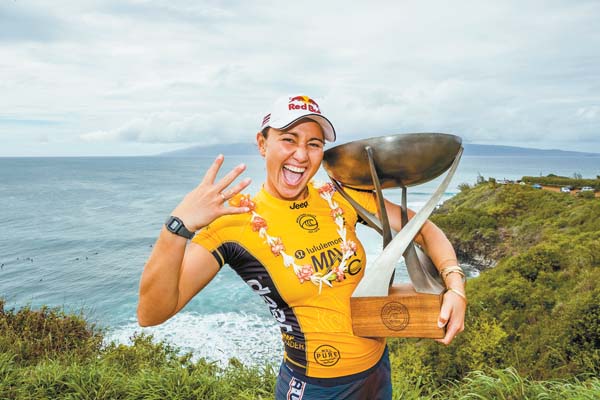 Carissa Moore of Honolulu celebrates with the championship trophy after securing her fourth world title Monday at the WSL Lululemon Maui Pro at Honolua Bay. Moore also won the title in 2011, ’13 and ’15. WSL via Getty Images / Kelly Cestari photo

Carissa Moore once again stands atop the women’s surfing world.

And she is now the most decorated Hawaii surfer, male or female.

The Honolulu native secured her fourth world title Monday during the Lululemon Maui Pro by advancing to the semifinals of the World Surf League Championship Tour finale at Honolua Bay. 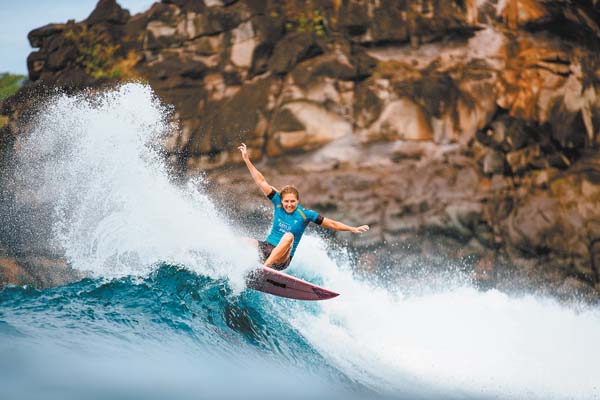 “That was crazy and I was trying to keep my focus and emotions in check,” the 27-year-old is quoted as saying in a WSL press release. “This is incredible! It’s been years of work and years of growing and learning. It’s been a journey and I’ve been really looking forward to this moment, but it hasn’t sunk in yet. So many of my family and friends are here and I’m so excited to share this with them.”

Moore came to Honolua with a slim lead over California’s Lakey Peterson and Florida’s Caroline Marks in the world title race as well as the battle for an Olympic spot. Moore and Marks punched their tickets to Tokyo when Peterson was eliminated in the round of 16 on Sunday, and Moore sealed her world title victory when she beat Nikki Van Dijk and Marks was eliminated by eventual winner Stephanie Gilmore in the quarterfinals Monday.

“I dreamed of this moment for a really long time,” Moore said. “Each world title has been a little different and this one was definitely the hardest. Being in the title race with Caroline and Lakey has been incredible and they’ve both really pushed me. I wouldn’t be here without my amazing support team. I felt so much love on this journey this year and it really pushed me through. … It feels like things have come full circle and following in Duke (Kahanamoku)’s footsteps in the Olympics gives me chills just to think about it. I hope to go to Tokyo and spread the aloha spirit and I’m really proud and honored to represent the USA and in particular Hawaii.” 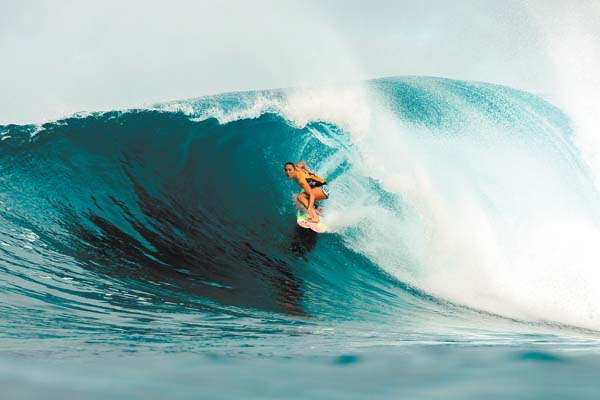 Carissa Moore rides through a barrel Monday at Honolua Bay on her way to her fourth world title. WSL via Getty Images / Cait Miers photo

After her quarterfinal win over Marks, Gilmore faced off with Moore in the semifinals. There, the Aussie great — a seven-time world champion who will also be competing in surfing’s Olympic debut next summer — took out Moore in a close heat, 15.94-15.07.

With her win, Gilmore finished fourth in the world title race.

“I found myself sitting there in good positions in the lead next to these girls and it just brought back these thrilling feelings and memories of being in world title races,” Gilmore said. “There is so much on the line and I think I just kicked into a new gear. Amazing event and year for everybody.”

It was a triumphant return for Wright — the two-time world champion was competing for the first time after a 17-month recovery from illness.

“I feel very lucky and grateful to be here today,” Wright said. “It was only a couple of months ago that I was still in a rough place. I would love to thank the people who have helped me get here today. A lot of that is my girlfriend, Alex. She has been there the entire time for me. She saw it all. She saw the worst of the worst and to be here today, to be surfing, and to be happy and healthy, it was a rough one and I am so enjoying this moment.”