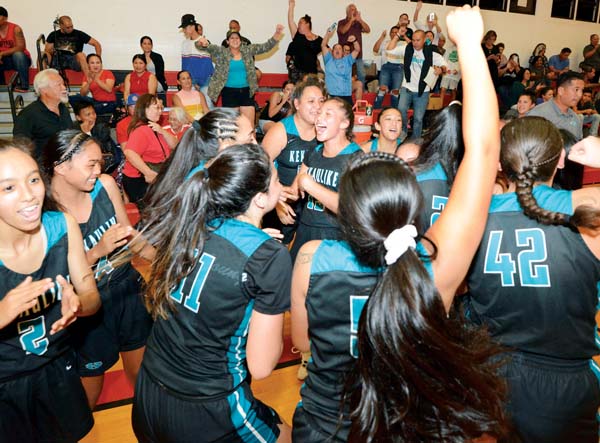 King Kekaulike High School players celebrate after defeating Lahainaluna 52-44 on Tuesday night at the Lunas’ gym — the Lunas had not lost an MIL game since 2007. The Maui News / MATTHEW THAYER photos

Pahukoa scored 16 points, including eight in the pivotal fourth quarter, to lead King Kekaulike past Lahainaluna 52-44, snapping the Lunas’ 12-year-old MIL winning streak at 164 on Tuesday night at Lahainaluna gym. The mark is an all-sports MIL record.

“I’m pretty happy, but I think that was a team effort,” said Pahukoa, one of three freshmen on Na Alii’s roster. “We just played hard. We just tried our best and that was just good enough. No matter what anybody says, we just keep pushing through.”

Na Alii stands atop the MIL Division I standings at 4-0, while the Lunas are 2-1 with their first league loss since 2007. 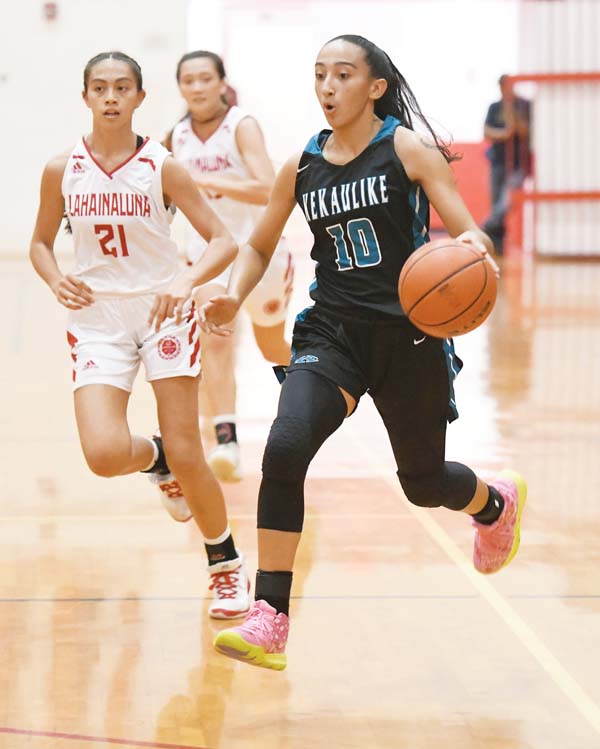 Pahukoa added the final four points of the night on a drive to the basket and two free throws.

The Lunas clung to a one-point lead going to the fourth quarter, but King Kekaulike’s Cailyn Ukida tied the game at 42 on a free throw with 7:48 to play.

“The mantra all week was ‘never quit,’ “ Peters said. “No matter what happened, we had to fight to the end and they did. They work hard at practice and they deserved this one tonight. There’s a long way to go though. They deserve all of it. Big win for our community, our school, but more importantly these girls. They really work hard.”

King Kekaulike took a 44-42 lead on a coast-to-coast drive by Pahukoa before Kiera Kaniho’s baseline layup tied it 44-44 with 5:57 to go. 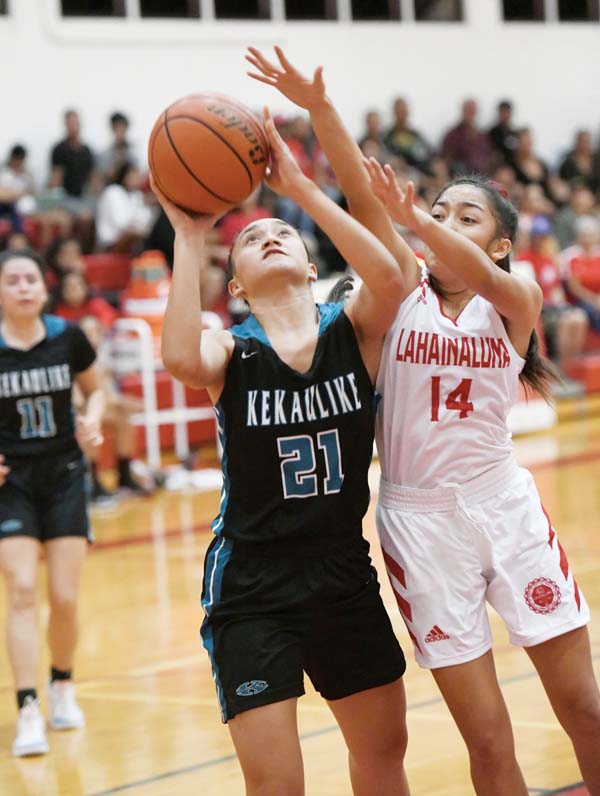 Na Alii went on an 17-4 run to take a 29-23 lead, capping it on back-to-back 3s by TC Pahukoa and Mary Pahukoa with just over a minute to go in the second period.

The first half ended 30-25, with King Kekaulike in front.

A layup by Lahainaluna’s Taylor Eldredge made it 38-34 with two minutes to go in the third quarter.

The Lunas’ Abigail Akamine fouled out of the game with 1:33 left in the third quarter and her twin Ashley Akamine left with a leg injury with just over 5 minutes to play.

“Eventually we knew it would, yeah,” Lahainaluna coach Todd Rickard said of the streak ending. “Now, we’ve just got to move on to the next day and get prepared to play the rest of the season. That’s a good team over there, good shooters, they play hard. My hat’s off to them.”

Na Alii outscored the Lunas 11-2 in the final period. This rivalry appears to be just building — King Kekaulike has just two seniors, the Lunas none.

“It’s not we lost the game,” Rickard said. “They took the game from us.”