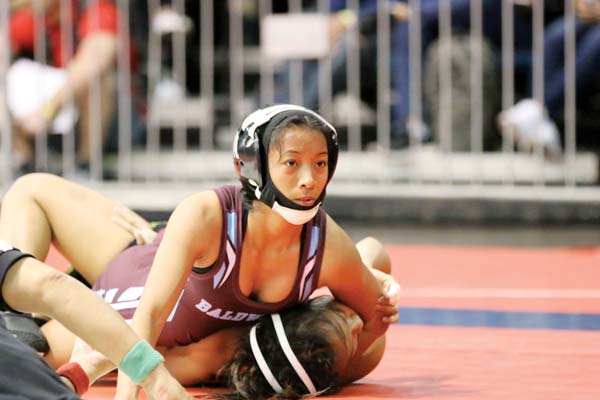 Baldwin High School’s Liana Ferreira looks up as she tries to pin Campbell’s Jazmyn Enriquez in a girls 97-pound quarterfinal at the Texaco/HHSAA Wrestling State Championships on Friday at the Blaisdell Arena. Ferreira won 13-2 to advance to today’s semifinals. — JASON HAYASE photo

The Maui Interscholastic League advanced 25 wrestlers to today’s semifinals of the Texaco/HHSAA State Wrestling Championships — 15 girls and 10 boys — at the Blaisdell Arena on Oahu on Friday.

Baldwin and Lahainaluna high schools appear to be in contention for the girls team title, each team notching six semifinalists.

Lahainaluna leads the girls standings going into today with 85.5 points, six ahead of Moanalua. Baldwin is sixth with 61.

Baldwin traveled with just seven wrestlers after one qualifier from the MIL championships did not make the trip. 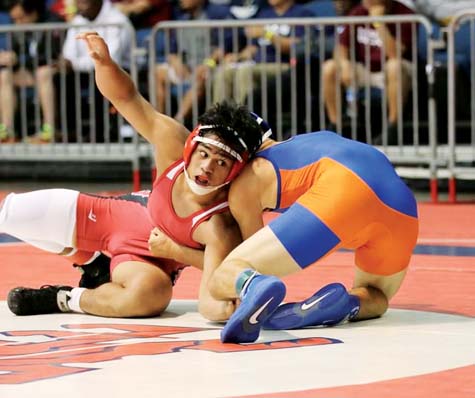 “We brought seven, you know, that’s all we had — we had eight, but right at the last minute … so we just brought seven,” Baldwin coach Malakai Panuve said. “Out of the seven, six made the semis.”

After losing four starters to various issues this season, Panuve was not going to count on anything to do with the team title. Baldwin won the girls team crown in 2018.

“I’m not going to think about that,” Panuve said. “I just want to focus on the girls match by match, whatever the outcome is at the end. If they do well, I would say maybe. I’m just taking it one match at a time.” 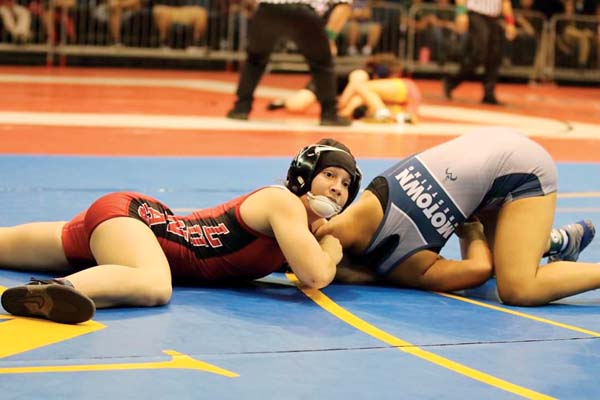 Estrella is trying to become the second MIL wrestler ever to win four state titles — the first was Lalelei Mataafa, who won the 225 title from 2013-16.

Among the boys, Baldwin’s Ravida brothers — Tobey Ravida (113) and two-time state champion Coby Ravida (120) — made the semifinals. Later in the evening, the Bears’ Maake Panuve (220) also made it into today’s semifinals.

Kamehameha Kapalama leads the boys standings with 89.5 points. Lahainaluna is sixth with 48.5, while Baldwin is seventh with 47. 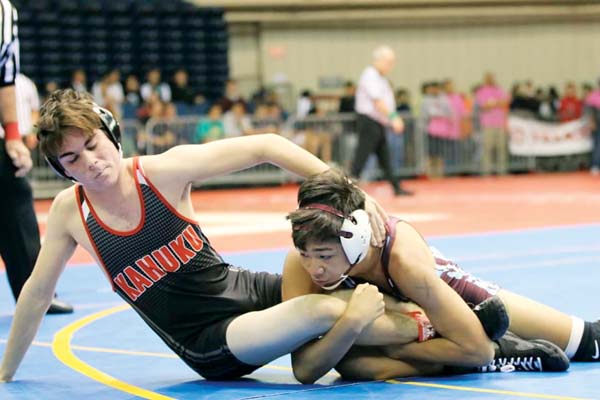 Lanai’s Alan Sanchez Jr. is in the final four at 120, while Kamehameha Maui’s Zachary Genobia made the semifinals at 182.

The action was delayed in the afternoon after a wrestler from Leilehua was disqualified for several infractions in a round-of-16 match against Baldwin’s Nephi Laga at 285.

HawaiiPrepWorld.com reported that the Leilehua wrestler was arrested at the scene after allegedly threatening a referee and grabbing his shirt, and pushing down a security guard. Several adults can be seen coming out of the stands in still photos on Hawaii­PrepWorld.com and video posted on Facebook. Hawaii­PrepWorld.com reported that several friends and adult family members were escorted from the arena by HHSAA officials, causing a five-minute delay on all six mats. 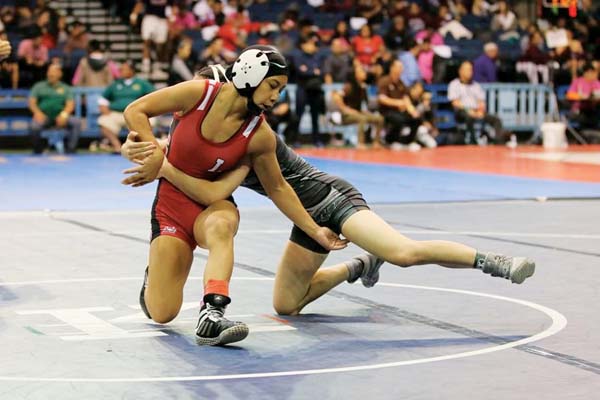 Panuve said things quickly got somewhat out of control — it was a scene he said he has never seen in his wrestling career as a competitor or coach.

Maui referee Bob Vickers can be seen near the melee in still pictures and on video posted to Facebook.

“The family started shoving referees and pushing guys,” Panuve said. “It was crazy.”