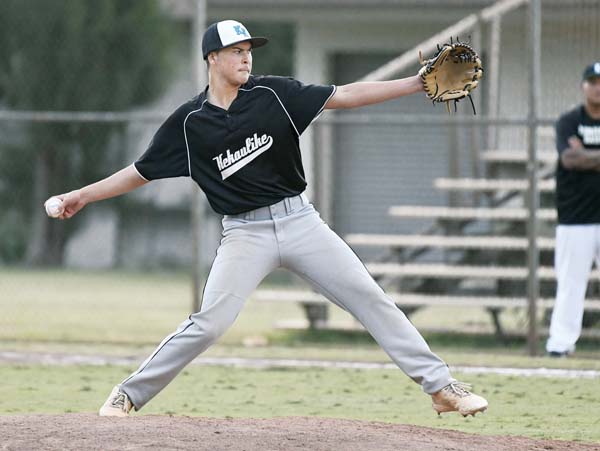 WAILUKU –It certainly wasn’t the result they were looking for, but the King Kekaulike High School baseball team learned a little bit about itself on Thursday at the 22nd annual version of its own tournament.

Konawaena, a Division II state tournament team a year ago, beat Na Alii 10-1, but there were flashes of potential for the Upcountry nine. One was the 5 2/3 innings of relief thrown on the mound by senior T.J. Perkett.

“Pretty loose, I was pretty confident in all my pitches, that I could spot them up,” Perkett said after being called in from right field with five runs already on the scoreboard and just one out in the Konawaena first inning.“Games like this are going to help learn what we need to work on more and just wake us up and let us know what’s coming.”

Konawaena scored five runs in the bottom of the first inning. Three walks loaded the bases before Kainoa Jones knocked in two runs with a single to left field, Ethan Yamaguchi followed with an RBI single to left, and two more runs scored on a dropped fly ball in center field.

Na Alii got a run back in the top of the second when Ty Otani reached on a two-base error to lead off, was sacrificed to third by Ayvin Vargas-Ixcotoyac, and scored on a wild pitch. 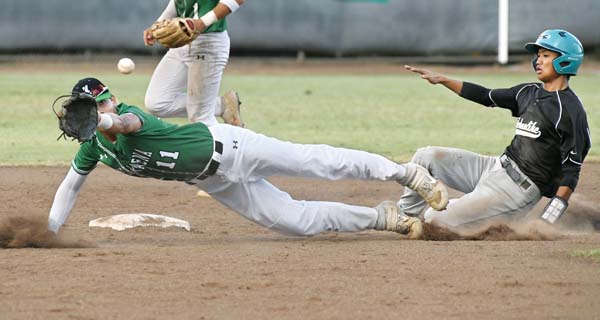 King Kekaulike’s Ryder Antolin slides into second with a third-inning stolen base as Konawaena shortstop Bronson Rivera dives for the throw from his catcher Thursday. The Wildcats won, 10-1.

Konawaena added a run in the fourth on an RBI single by Makakea Auwae.

In the fifth, the Wildcats scored another run when Jones doubled to lead off, took third on an error and scored on a wild pitch. Na Alii ended the inning on a nifty 6-4-3 double play.

In the Konawaena sixth, Kaden Baptista tripled to lead off and scored on a single by James Kapela to make it 8-1. Two more runs scored on an error to make it 10-1.

Na Alii, 1-3 so far in preseason play, have two more games this weekend and then will play in the Baldwin tournament next week before the Maui Interscholastic League gauntlet of a schedule begins in late March.

“The talent in the MIL is probably better than all the teams we’re going to face right now, “ Perkett said. “So, we have potential to go as far as we can go, but it just matters on how hard we work and that’s all it is. You know, work harder.”

King Kekaulike coach Mark Makimoto liked the way his team hung in against the Wildcats, forcing the game to go the distance after falling behind by five runs early.

Konawaena coach Aaron Mori sees potential in Na Alii. He is happy to have his team here for a preseason event that includes seven teams from four islands.

“They’re scrappy, very scrappy,” Mori said. “For us, we just have to be more disciplined. We can actually get a lot out of a tournament like this. We’re a brand-new program, brand-new coaching staff, so we’re just trying to work out our bugs.

“We can be really good. Be more disciplined at the plate, and we’re just trying to change the program around. We have to have more of a killer instinct.”