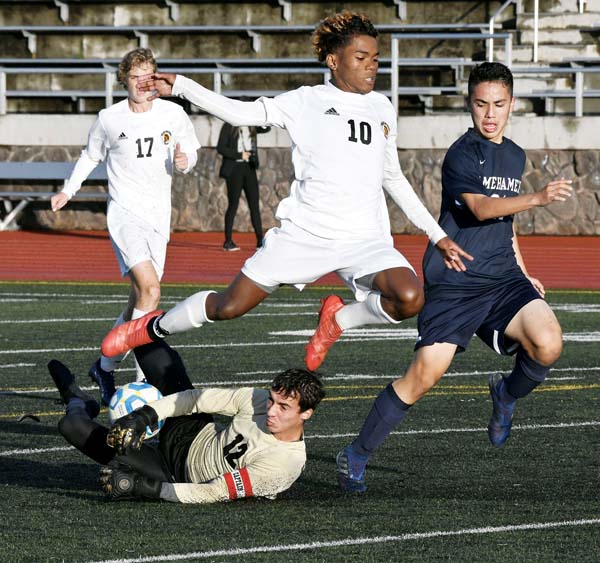 Kamehameha Schools Maui goalkeeper Gabriel Arcas slides to make a save and rob Mililani’s Jvon Cunningham of a goal in the first half of a state tournament first-round match Monday at Kanaiaupuni Stadium. Also on the play are the Warriors’ Trenton Kiesel and Trojans’ Max Scott. The Maui News / MATTHEW THAYER photos

In the end, Mililani was too much for the Maui Interscholastic League runner-up.

The Warriors allowed two second-half goals in a 2-0 loss to the Trojans on a wet Monday evening. The loss ends Kamehameha Maui’s season at 7-2-2.

“We played solid but we just had our couple slip-ups, but that’s what led to the two goals,” said Gabriel Arcas, the Warriors’ senior captain and goalkeeper. “On offense, we were doing good, we were going strong, we just couldn’t put enough shots on the goal, we didn’t test the goalkeeper enough, so that’s the only reason we didn’t come out with the win tonight.”

Trojans midfielder Jvon Cunningham scored off an assist by Max Scott to break a scoreless tie in the 64th minute. In the 78th minute, Mililani’s Liam McGehee snuck in another shot to extend the lead. 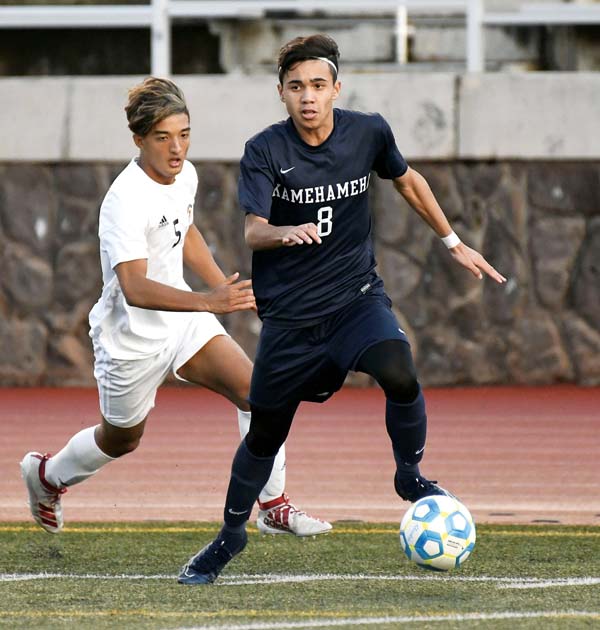 The Warriors’ Ikua Kamaka dribbles away from the Trojans’ Brandon Flores in the second half Monday.

“We were just trying to find a rhythm, Kamehameha is a great team — tremendous technical ability and they really put it to us,” Mililani coach Steven McGehee said. “We had to work hard to get a couple of good looks and we got a couple of goals, thankfully.”

Mililani (11-2-1), the No. 5 team out of the Oahu Interscholastic Association, advances to the quarterfinals, where they play second-seeded OIA champion Kapolei on Thursday.

Coach McGehee said that the Hurricanes (12-0-1) have been “our biggest rival.”

“It’s not a mystery on who they are and who we are, so yeah, we look forward to it,” he said.

The Warriors were making their first state tournament appearance since advancing to the state final four in 2016. 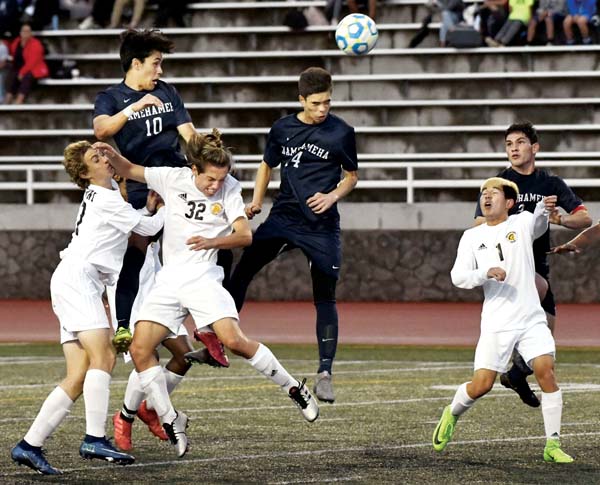 “I try and tell the boys, in a sense, we’re taking baby steps, which I hate to take steps and they want to win the whole damn thing, which I do too, but in reality with how our program is, we’re losing a bunch of seniors and we’re on the younger side,” Kamehameha coach Jayson Nakasone said. “It’s a little expected that we need some time to grow, and you know, it’s not going to happen in three months, four months. It’s one of those things that we have to accept and build on, but Mililani was good, that team was good.

“They’re in the state championship every year, so for our little school, we still try to do something.”

“I love these guys, I mean, the juniors this year are going to be ballers next year, and just love these guys,” Arcas said. “From my defense to my midfield to my wings to my strikers, I love all of them and for our seniors, it was just a good year for us. We’ve done three years in a row getting third place (in the MIL), so it was finally a chance for us to touch states.”

The rain held off while the Trojans and Warriors both had five shot attempts during the scoreless first half, with Arcas making key saves. 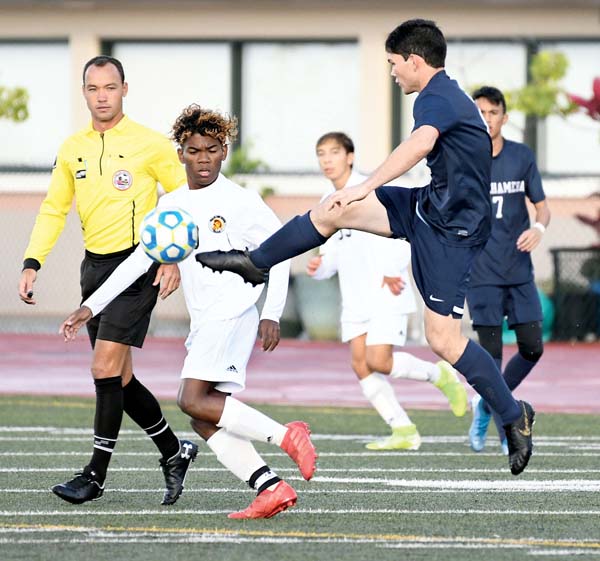 Kamehameha had a few close calls to start the game, like Nakagawa’s bullet shot down the middle in the eighth minute, but Trojans goalie Nicholas Gaston made the stop.

In the 38th minute, Liam McGehee took a free kick from outside the box, but Arcas knocked the ball up and over the goal. Just minutes before, Arcas had charged the ball during an oncoming fast break, sliding and making the stop.

The Trojans put the pressure on the Warriors in the second half and added three shot attempts before scoring their two goals. Kamehameha, which attempted five more shots, just couldn’t break Mililani’s defensive line and find the net in time.

“The seniors are almost irreplaceable — almost — because we had them from when they were freshman,” Nakasone said. “We watched them grow over the last four years from boys to men, and we hope that they gain more than just wins and losses through our program, that they actually grow up to be good men out there. At the end of the day, that’s all we hope for.” 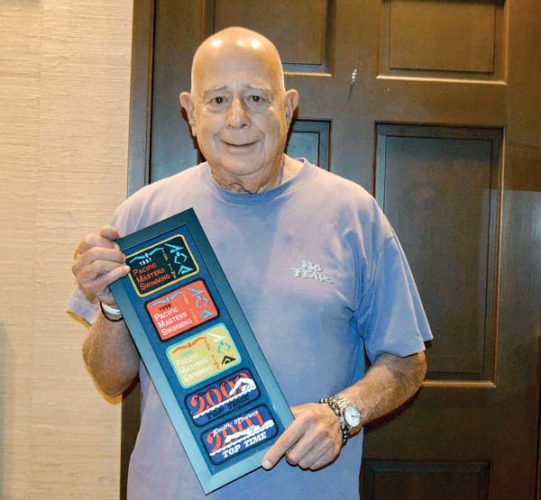