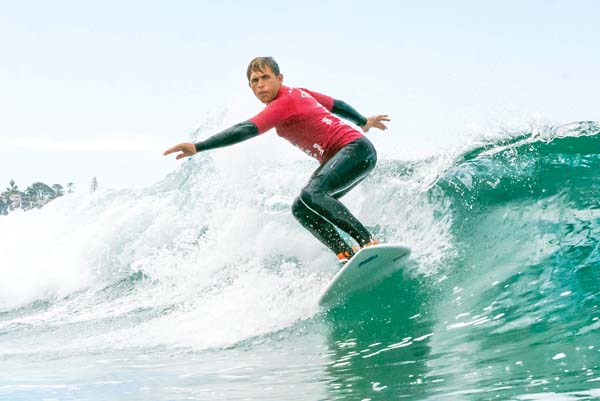 At 38 years old, Pukalani’s Aaron Paulk is a newcomer to competitive surfing.

At 12, Haiku’s Faith Lennox is a veteran of the sport.

Lennox won silver in the Women’s Stand 1 Division, made up of surfers that ride standing with an upper limb amputation or an impairment equivalent.

Faith Lennox lost the lower part of her left arm at nine months old after being born with compartment syndrome, a condition that occurred when her arm was crushed while her mom Nicole was in labor. 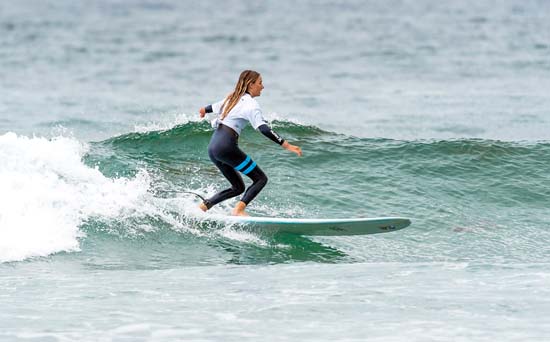 When the Lennox family moved to Maui in 2015, Faith was already a surfer who gained her initial inspiration from Bethany Hamilton, a Kauai professional who at 13 years old lost an arm in a shark attack.

“Bethany was surfing at the U.S. Open in Huntington Beach,” Nicole Lennox said. “My mom actually reached out, like, ‘I have a granddaughter, she is an amputee, we’d love to meet Bethany.’ And they messaged right back and were like, ‘Come bring her down, come watch her surf.’ So she did, we went down there and watched her surf, we have the cutes pictures of Faith as a 2-year-old with Bethany.”

A year later, then 3-year-old Faith was struggling with the mindset of having a missing limb when her mom reached out.

“She would say things like ‘I want another hand, I want a friend with one hand,’ to me and it was all these things I wasn’t expecting until she was, like, maybe a teenager,” Nicole Lennox said.

Nicole Lennox reached out to Hamilton’s sister-in-law, whom she had kept in touch with from their initial meeting. A few days later, Hamilton took time out to spend an entire afternoon with Faith. 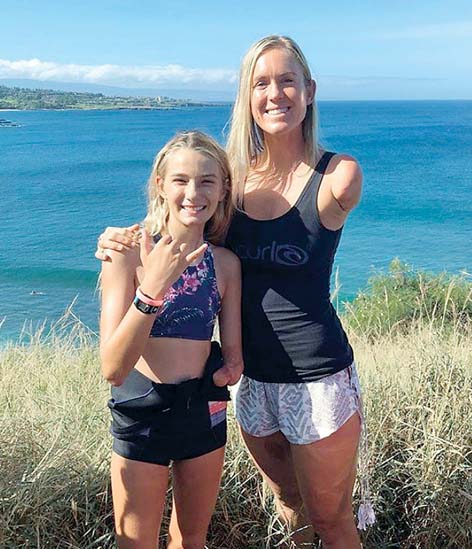 That week, Faith repeatedly watched “Soul Surfer,” the film based on Hamilton’s autobiography “Soul Surfer: A True Story of Faith, Family, and Fighting to Get Back on the Board.”

“And at the end of the week she said, ‘I like having one hand,’ “ Nicole Lennox said. “Never said otherwise (since).” 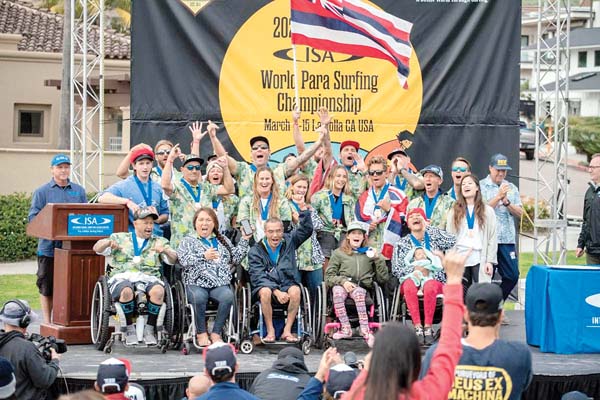 When she started surfing with her father Greg Lennox as a 5-year-old, Faith admitted she was “a little bit of both,” afraid and excited. “And cold,” she added of the water temperatures in California.

Those feelings have clearly dissipated as she is now a regular at Hookipa Beach Park and is a team rider for Kazuma Surfboards. Veteran Maui surf coach and shaper Matt Kinoshita is often along to make sure she is OK in the line at Hookipa.

Kinoshita customizes her boards, putting handles on them, and glasses them as light as possible so they can be carried with one arm.

“I’m so thankful to know him,” Faith Lennox said of Kinoshita.

The Menehune Mayhem — an event put on by Maui pro Ian Walsh — was her first contest, at the age of 8. Walsh pulled Faith aside at that contest and gave her an award for sportsmanship.

While winning a medal at worlds is an impressive feat, Faith Lennox described her new friend Paulk’s showing as “amazing.”

Paulk took home a bronze medal in the Men’s Visually Impaired 2 Division, made up of surfers with a visual impairment. He has been surfing for seven years, but last week’s event was his first contest.

“I’m relatively new to the sport, but definitely feel super connected to the ocean,” Paulk said. “And, yeah, it has turned into my biggest passion for sure.”

Fellow Maui residents Josh Bogle, 42, of Haiku and Victor Pullman, 37, of Wailuku were also part of the 12-person Team Hawaii that finished fourth in the event, behind Spain, the United States and Brazil. Bogle competed in the Men’s Kneel Division, while Pullman competed in the Men’s Prone 2 Division.

Paulk stumbled onto the chance to compete in the event.

“I just heard about it,” he said. “I just learned about adaptive surfing a month, two months ago. I was just surfing — I surf over in Lahaina all the time at Breakwall. There was a guy by the name of Shawn, he was a recent amputee and he asked me if I was going to California. I said, ‘What’s in California?’

“He told me about adaptive surfing and I just got in touch with Access Surf and they routed me through Adaptive Maui. Jennifer (Gladwick) runs Adaptive Maui and supports a lot of the Maui athletes.”

Paulk described his vision impairment as: “I’m centrally blind, so I have a juvenile form of macular degeneration, it’s called Stargardt’s disease. It affects just the central vision, so I have full periphery (vision), but I have a big blind spot right in the middle, in the center of my vision.”

There may come a day when all of his vision is completely gone.

He often gets help to surf from friend Gabriel Donihi, but Paulk doesn’t always need a guide at Breakwall.

“I tend to just kind of go to secondary spots, the only place I can navigate a crowd is Breakwall, just because I’m comfortable and confident out there,” Paulk said. “A lot of the regulars, the locals kind of know my position with my eyes and kind of look out for me.

“If I go to other spots that I don’t know as well I definitely go out with a buddy, spotter, my spotter Gabriel. He was my spotter for round No. 1 in the competition — him and I usually go out together.”

Paulk’s first contest was “super amazing. I never expected … I feel like I can surf OK and have a great time doing it, but just surfing for Team Hawaii is an honor. And then also competing with such amazing, inspired athletes that are just making the best out of their challenges. What an amazing inspiration.

“Just a really big honor to even compete and be a part of Team Hawaii and then to place third in the world inside of a division is kind of a dream come true. And it’s only the beginning.”

Paulk was just “one wave away from getting a gold. I was waiting for the last good wave to come through and it never came. I was right there in position, but I’m really stoked just finishing in third place.”

The result has him thinking about the Paralympics as well. His 7.80 score was the high for a single wave for his division at the ISA event.

He said he wants to “use this as a platform to support others with disabilities and inspire them that our challenges bring opportunities we could not have imagined were possible.”

“Who knows what could come out of this, but this is going to push me to push my edge, to grow, and to just get out there more in the world to compete in competitions all over the world,” Paulk said. “The ISA is a part of that (International Olympic Committee), so all these folks that are competing in this will eventually be part of the Paralympics when surfing becomes a sport.”