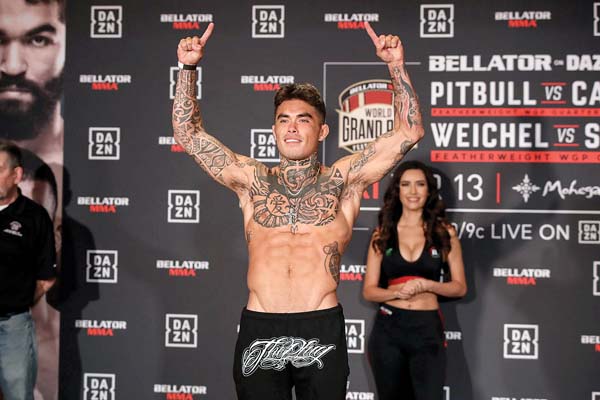 Zach Zane is ready to fight.

The 30-year-old Baldwin High School graduate is set to face Nick Newell tonight in Bellator 241 in a lightweight main card bout at the event that is scheduled for Uncasville, Conn.

The event begins at 4 p.m. HST and will stream on Bellator’s YouTube channel and be broadcast on DAZN. It is part of the fight card headlined by Patricio Pitbull vs. Pedro Carvalho for the Bellator featherweight world title.

“I know a lot about him,” Zane said of Newell. “The guy, he’s kind of a sensation, one-armed fighter. I knew about him growing up with MMA. He’s very well-known in the MMA world, let’s just put it that way.”

Zane can’t wait to get into the octagon with Newell. Zane is 2-2 in his last four fights, the most recent being a unanimous decision win over Nainoa Dung in December at Bellator 236.

“When I got the call it was almost, like, out of a movie, like a dream call almost because it’s Nick Newell,” Zane said. “I would never have expected to fight Nick Newell. I honestly respected him a lot and what he did in the sport.

“I got the call, the match to fight him. I can’t say ‘no.’ But at the same time as much respect as I do have for him, I know in my heart I have to knock this guy out.”

The event will be closed to fans due to concerns over the coronavirus. Zane admitted he was watching the news on Wednesday after the NBA suspended its season, starting a cavalcade of cancellations and postponements throughout the sports world.

It will not stop his determination to move up the MMA ladder with a major opportunity, perhaps the biggest fight of his career.

“I just have to finish him,” Zane said. “I know in my heart if I want to make a name for myself … because right now I’m nobody. Honestly, I’m nobody. I’m just a guy from Maui. I have a humble home, I have a humble job. I am humble myself. I have a family, and I just want to take care of them.”

Zane said his mission is clear.