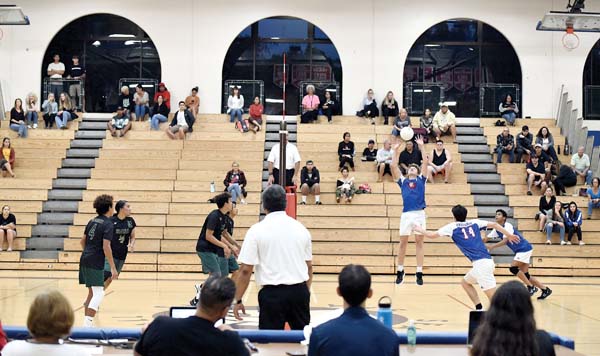 A small crowd watches Seabury Hall host Hana in a boys volleyball match at Erdman Athletic Center on Friday night in what might have been the last Maui Interscholastic League sports action of the school year. High school athletic competitions throughout the state are suspended indefinitely due to coronavirus concerns. The Maui News / MATTHEW THAYER photos

The Maui Interscholastic League joined the rest of the state in shutting down practices and workouts for all sports on Monday due to concerns over coronavirus, according to several coaches and administrators in the league, and Hawaii High School Athletic Association Executive Director Chris Chun via text message on Monday evening.

The move came three days after the MIL was part of the statewide announcement from the HHSAA on Friday that all high school athletic contests would be suspended indefinitely.

Four coaches, each from a different spring sport from three different MIL schools, confirmed to The Maui News that they got the news of no more practices from their athletic directors on Monday.

“Practice is suspended indefinitely,” said Craig Okita, coach of the Baldwin baseball team that is ranked second in the state by scoringlive.com. “Basically we’re like in a red period, so the coaches cannot have contact with the kids, they cannot go do things. We’re in a bad spot. This is what I feared, this is bad news.”

The coaches were told a press release would be forthcoming from the league, but Chun said via text that no press release was sent out following their HHSAA Board meeting on Monday morning. On Sunday, the State Department of Education announced that spring break would be extended through March 29. 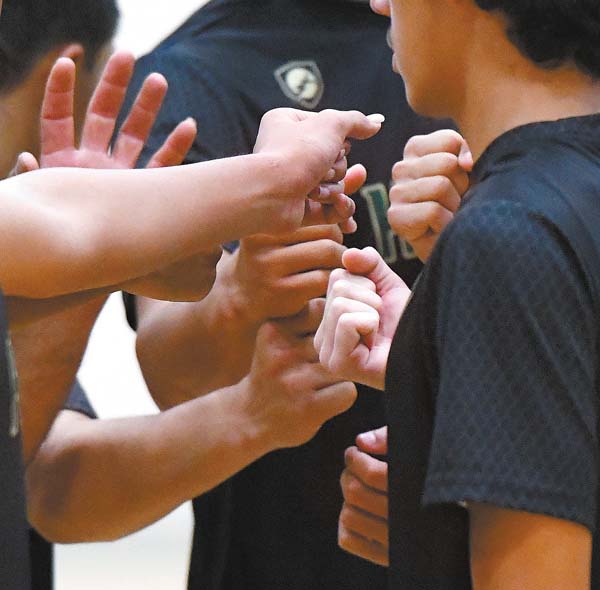 “The HHSAA Board met and agreed to suspend all practices until March 30th,” Chun texted The Maui News. “We will continue to meet weekly to reassess if needed.”

An HHSAA press release announcing the decision was sent out later Monday night.

Lanai and Maui high schools both posted on their athletics Twitter accounts that practices and workouts were canceled until further notice.

Cherie Malacas, a senior softball player at Presentation College in Aberdeen, S.D., and Lanai graduate, said on her Twitter page: “As coach would say, ‘each day is not given or promised, but it is a gift.’ This game has taught me more about myself than anything else I’ve ever done. Nothing less, I’m extremely grateful for all the lifetime memories and friendships I’ve made along the way. Thank you softball.”

Okita said that a season of any kind is highly questionable at this point.

“It was news that I was dreading, but I’m starting to, I guess, face the reality of it. With what’s going on and the news from the AD and the higher-ups, it seems like with no practice and everything shutting down, the likelihood of a season gets smaller and smaller every day.”

Okita’s senior son Reyn Okita is an infielder for the Bears who is headed to Pacific University in Forest Grove, Ore., in the fall. He is just one of the Bears who will miss even the chance to practice.

“They call and they ask, ‘Coach can we work out? And now with this everything is just shut down. A lot of our boys have been working hard for the last number of months and now it comes to a halt, you really don’t know what to do with yourself. As I’m driving, getting ready to drive home from work, it’s ‘where am I going?’ I’m going home to make dinner. I haven’t done that in months.”

Baldwin track and field coach Gary Sanches answered his phone just after ending a meeting during which he told his team that practices were off as well as competition, at least at this point.

“The kids are kind of disappointed, but there’s nothing we can do,” Sanches said. “Like I told these guys, when I got drafted in 1967, which was out of my control and I was sent to Fort Ord and, you know, people had died. We took precautions, but nobody panicked. Now, everybody is overreacting, ‘Oh man.’ What are you going to do?

“My question would have been: ‘If we practice, what are we practicing for? Are we going to play a game?’ “ Nakamura said.

The Lunas did not hold practice Friday “because we had a few parents concerned,” Nakamura said, adding that her team would have returned to practice this week had it been allowed.

Nakamura received her email at 4:01 p.m. from Lunas AD Scott Soldwisch that practices were off.

“It says that all MIL practices will discontinue until further notice,” Nakamura said. “It just says, ‘Coaches due to shutdown of the county facilities and inequity created between teams and schools all practices will be discontinued until further notice. There is no set time for them to resume, however, it is our hope that we can resume practice and the MIL and the HHSAA season at some point this spring.’ “

“I’m all about health and safety first,” Cook said, “Before I used to be all about academics, but obviously this takes a little bit of precedence with the things going on in the world. It’s a little disheartening for my seniors that this is their last hurrah.” 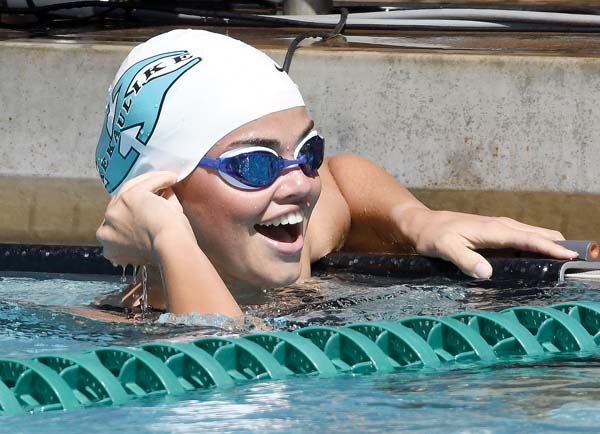